As Helsinki’s one-on-one presidential summit looms, with foreign policy mavens fearing that Vladimir Putin will run circles around a clueless Donald Trump, it’s time to examine what makes the Kremlin’s Chekist-in-Chief tick. Our president’s troubling statement that Putin and his KGB background are “fine” at least focused attention where it needs to be, on the undeniable fact that a career in the Soviet secret police made the Russian strongman who he is.

The Chekist worldview that forms Putin’s mental furniture is cynical and cunning to a degree that naïve Westerners—and from the Kremlin point of view pretty much all Westerners are naïve and easily exploited—find difficult to believe. Westerners simply shut eyes and ears, since the reality is so unpleasant. The casual manner with which Kremlin spies ruthlessly exploit others for their own ends is not a nice story, given that their methods embrace violence and life-ruining measures as nonchalantly as Westerners order a cup of coffee.

The cornerstone of the Chekist worldview is provocation, what the Russians call provokatsiya. It’s not new, indeed it was honed into a secret weapon in the late Tsarist era, to be perfected under the Bolsheviks. I’ve tried to explain this alien concept to Westerners for years, and it really boils down to a basic, rather nasty concept:

Provokatsiya simply means taking control of your enemies in secret and encouraging them to do things that discredit them and help you. You plant your own agents provocateurs and flip legitimate activists, turning them to your side. When you’re dealing with extremists to start with, getting them to do crazy, self-defeating things isn’t often difficult. In some cases, you simply create extremists and terrorists where they don’t exist. This is causing problems in order to solve them, and since the Tsarist period, Russian intelligence has been known to do just that.

Provokatsiya is why, whenever you meet Russians, they have a habit, incomprehensible to Westerners, of explaining that the world is not as it seems to be. In fact, it may be upside-down. Opposition is controlled by the regime, when not wholly fake. Resistance leaders are really regime operatives out to discredit the resistance. The most extreme anti-regime voices are not real. Russians think this way because that’s how their country actually works, whether under tsars, Red commissars, or “former” Chekists.

Worse, Russian spies have spread their provocative poison abroad, injecting the provokatsiya bacillus into their neighbors and beyond for decades. While this used to be costly and time-consuming (Russian spies are comfortable playing the long game), in the 21st century much of this mayhem can be spread online, with anonymous activists, trolls and bots, at minimal cost compared to old-school espionage.

Take Ukraine, which is crawling with Russian secret agents thanks to recent history. One of the Kremlin’s top priorities is making Ukraine appear to be a fascist regime that, at any moment, might exterminate Jews, Roma, or other minorities. Kremlin-linked activists have stirred up trouble in western Ukraine, where the country’s Hungarian minority resides, fomenting interethnic hatred, according to Ukraine’s Security Service or SBU. More seriously, according to the SBU, aggressive Russian online provocations aim at creating violent mayhem in across Ukraine. Worst of all, per SBU reports, a recent deadly attack on Roma in western Ukraine, near the city of Lviv—one of several assaults on Roma supposedly by far-right Ukrainians—in fact is the Kremlin’s secret handiwork.

The Lviv region, the heartland of Ukrainian nationalism, is also a hotbed of Muscovite provokatsiya. The Kremlin seeks to harm generally friendly relations between Ukraine and Poland, which borders on the Lviv region. Poland, as a key NATO state, is Ukraine’s anchor to the West to which Kyiv so much wants to belong. History is complicated, however. This border area was part of Poland between the world wars, and anti-Polish sentiment lingers. For their part, Polish nationalists remember the bloody depredations against Poles that were perpetrated by Ukrainian nationalists during the Second World War. Some 100,000 Poles were murdered here, and the wound between Warsaw and Kyiv remains semi-open.

Unsurprisingly, recent years have seen a spate of vandalism and attacks on monuments in western Ukraine to murdered Poles. Friends in security circles in Warsaw tell me they have no doubt this low-grade terrorism—which of course is presented in Kremlin media as the work of “Ukrainian fascists”—has a Russian hand behind it. There is considerable evidence that Kremlin operatives are doing exactly this across Ukraine.

Nationalist passions collide in the border city of Przemyśl, just inside Poland, a short drive from Lviv. Like clockwork, Polish nationalists hold rallies in Przemyśl where they chant “Death to Ukrainians,” and in response Ukrainian nationalists march amid cries of “Death to Poles.” Both sides feed off the ugly passions of the last war, ruining interethnic relations in the region. Polish authorities publicly state they detect the “hand of the Kremlin” behind these rallies.

It’s no secret that far-right Polish nationalists include Russian operatives. The local rabble-rouser in Przemyśl is Mirosław Majkowski, a history buff who has attracted attention for his pro-Putin utterances, amid his ritual denunciations of anything and everything Ukrainian. Majkowski caused outrage by staging “reenactments” of Ukrainian massacres of Polish civilians during the Second World War.

These passions reached their peak around 2015, when Majkowski found an ideal foil in Artyom Lutsak, a Ukrainian nationalist and right-winger who breathed anti-Polish hatred. Majkowski and Lutsak fed off each other perfectly, and Przemyśl became a tinderbox. Lutsak, the regional commander of Right Sector (Pravyi Sektor or PS), the far-right Ukrainian nationalist party, came to prominence for his leadership at the front with a PS-linked volunteer battalion in eastern Ukraine during the war against Russian invaders in 2014-15. Known by his nom de guerre Doktor (he had once attended medical school), the charismatic Lutsak infuriated Poles by denying atrocities committed by Ukrainian nationalists in the 1940s, and generally pushing aggressively anti-Polish views. Before long, Majkowski and Lutsak, bitter enemies, had succeeded in firing up the Przemyśl region. Polish and Ukrainian nationalists were threatening violence, as Warsaw and Kyiv tried to calm the situation.

Questions arose about what was really going on. In the first place, PS—just like the Polish far-right—is known to be penetrated by Kremlin agents provocateurs. Many suspected that Majkowski was acting on Moscow’s orders, while examination of Lutsak revealed troubling facts. The Polish investigative reporter Marcin Rey, who has unmasked several secret Russian operations in Poland, uncovered that Lutsak was born in 1972 in Moscow, and did not move to Ukraine until 2008. He did not obtain Ukrainian citizenship until 2012 (and does not seem to have ever abandoned his Russian citizenship), at the time he was running a Moscow-based security company of the kind that usually has connections to Russia’s Federal Security Service or FSB. Lutsak did his military service in Russia between 1991 and 1993, just after the Soviet collapse, in a border guard unit that was transitioning from the control of the KGB to that of the FSB. Rumors that Lutsak’s father was a KGB official remain unconfirmed, but Lutsak’s ties to what Moscow calls its “special services” are established.

Moreover, Rey discovered, at the height of the unpleasantness in Przemyśl, which Lutsak was co-directing from the PS regional office in Lviv, that Lutsak moved his wife and children to safety in the unlikely location of… Przemyśl. One might not think Lutsak’s family would be safe, much less welcome, in that city, but that discounts the warm relationship they had with none other than Mirosław Majkowski. Lutsak’s son Bohdan was close enough to his supposed archenemy to call Majkowski “Uncle,” while the two attended a rally in Warsaw on November 11, 2015, a Polish Independence Day event that has become a far-right gathering. Majkowski and the younger Lutsak appeared together in a photo amid weapons and anti-immigrant slogans.

This appears to be yet another case of Kremlin provocation, pushing extremes against each other for maximum political damage to civil society. Russian spies do this at home, they do it Ukraine, and they do it in Poland. In fact, they do it everywhere they can. Not all opposition is real. Some is compromised, while some is fully under Moscow’s secret control. Westerners who naively think Putin’s Russia isn’t doing this in the West right now are in for a rude awakening. What Kremlin spies did to Przemyśl they plan to do everywhere. 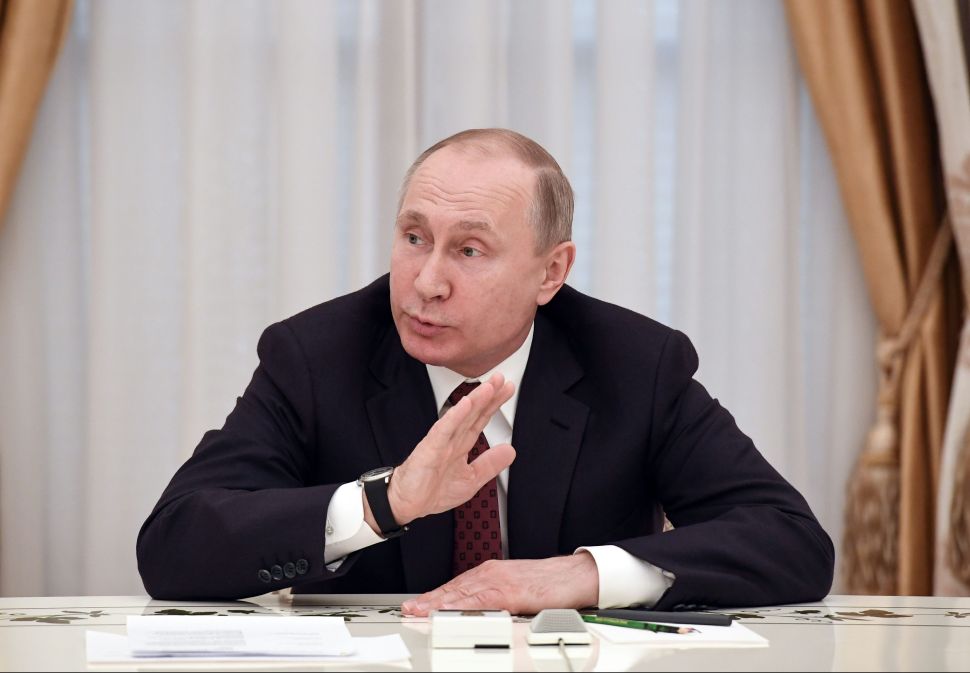