Despite its very specific title, Young Jean Lee’s Broadway debut (a first for an Asian-American woman) is actually about mediocrity. Or rather, mediocrity that thinks itself the standard for excellence. In other words, Straight White Men.

I’m not saying SWM are automatically mediocre—heck, I’m one and think I’m kinda special. Rather, everyone in the universe is mediocre, technically speaking. “Most people aren’t good at most things!” Matt (Paul Schneider) protests when brothers nag him about improving his status and career. Matt is expressing a truth so fundamental it’s ignored by this bullshit-fueled world. Hetero Caucasoid fellas (among others) have figured out that confidence, influence and aggression tip the scales.

The play is Lee’s first piece of fourth-wall naturalism—that most mediocre of theatrical forms, where banality routinely passes for wit and insight. It takes place over Christmas in the suburban home of retired engineer Ed (Stephen Payne), celebrating the holiday with his three adult sons. There’s dickish banker Jake (Josh Charles), less-dickish novelist Drew (Armie Hammer), and Matt, who moved back home and does temp work at a community group.

Jake and Drew are chill and funny, squeezed into flattering skinny denim and constantly cracking jokes or razzing each other. Meanwhile, Matt shuffles around in boxy mom jeans and baggy t-shirts (the spot-on costumes are by Suttirat Larlarb). Matt’s clothing and his bland affect, which breaks into sobbing over a Chinese take-out meal, would seem to indicate depression. That’s Drew’s conclusion, and he urges his sibling to get therapy. Jake has a political read of Matt’s apparent will to become invisible: “He’s making a choice! Just because all we care about is our own success doesn’t mean Matt has to.” Later, Jake taunts Drew, who teaches: “How is being another white guy with tenure making a difference?”

See, this is not your average bunch of low-melanin douchebros. One of Lee’s cleverest moves is to give them a lefty backstory. The guys’ late mother brought them up to be hyper-aware of their advantages in society. She even modified a game of Monopoly and re-named it Privilege. (If you pass Go while white, you pay a fine.) No one in the family ignores the fact that the system is rigged for their benefit. The only question is: What is your relationship to the consciousness of your privilege? Jake embraces his hypocrisy, almost cheerfully; Drew skirts it with liberal nostrums; Ed’s puzzled, since he worked hard all his life; and Matt is the neutral, stubborn center.

It’s vitally important that neither the family members nor the audience are able to diagnose Matt’s sorrow and passivity as either psychological or political in nature. Lee builds a dialectical argument between the brothers to root out the cause, but the real subject of inquiry is audience response. Matt’s misery is the blank space onto which we project our hopes and fears about race and class. In past plays, Lee has written about identity politics before: Asian-American, African-American, feminism, religious communities. Her plays, twisty and meta and cracked by design, are little sociological experiments that test spectator prejudice as much as her characters’.

My own interpretation is that Matt, who went to Harvard and did (useless) community work in Africa, beheld the full extent of his mediocrity and decided to scale life back so that he’s helpful, but takes up as little space as possible. Maybe that’s too tidy. After all, Lee has been here before. Matt is just the latest of Lee’s characters who wrestle with existential dread of brokenness, stupidity and vileness. If she has a recurrent theme, it’s the inescapable, destructive force of self-loathing. As playwright and essayist Jeffrey Jones has pointed out, Lee’s work is full of characters who wonder, “What is wrong with me?” Matt doesn’t ask; maybe he’s answered for himself. His crying at dinner is never explained, but it’s the catalyst to the play’s dramatic arc: What the hell has he got to cry about? If, in Lee’s world, to be human is to be defective and worthless, then: plenty.

Because Lee is writing a play about people like me, you might say, suddenly her message is Universal. Not really. One aspect of Straight White Men I’ve barely mentioned is its playful, provocative framing device. Two gender-fluid, non-white performers (Kate Bornstein and Ty Defoe) take center stage in front of a glitter curtain to greet the audience, explain the purpose of the ear-splitting hip-hop pre-show tunes, and make it clear that they are in charge. Bornstein and Defoe are like recording angels, guiding actors to places during scene changes, benignly supervising the stagehands as they move props and furniture. Anna D. Shapiro’s shrewd, pitch-perfect staging and the hugely charismatic cast make the whole affair both immensely pleasurable (the punch lines and sight gags are legit hilarious) and increasingly disturbing.

So the play works both as a political satire/PC PSA and also as a philosophical study of human limitations. It does both brilliantly because Lee is, in fact, one of our boldest living playwrights, one I rank with Wallace Shawn, Suzan-Lori Parks and Tony Kushner. She’s superficially goofier and perhaps less lofty than those canonized worthies, but the thinking drills deep and the writing is superbly executed. For a hard, clinical look at mediocrity, Straight White Men is thrillingly great. 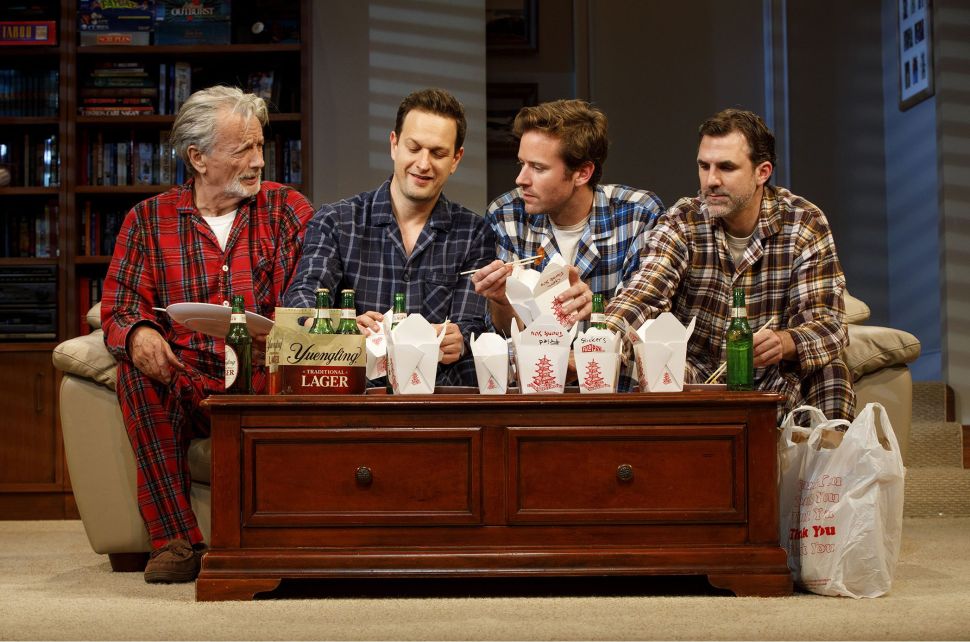