Everyone who has been near the internet knows that Ariana Grande, Pete Davidson and their surplus of matching tattoos and only slightly nauseating social media PDA has taken over as the most discussed/aggressively publicized Saturday Night Live relationship (and engagement) this summer.

But let’s not forget that for some reason, SNL is now the matchmaker of the moment, because apparently that finale party is like a speed dating service (hello, Ben Affleck and Linday Shookus), and is where Scarlett Johansson and Colin Jost first went medium-public.

ScarJo and Jost are far more low-key and private than Grande and Davidson when it comes to their relationship, but also it’s hard not to be. They’re taking a cue from the newly shacked up Grande and Davidson, though, as Hamptons-goers might be seeing the Vicky Cristina Barcelona star and Weekend Update anchor together out east even more this summer.

Johansson already owns a place in Amagansett, right by Gwyneth Paltrow, but she and Jost reportedly toured a home in Montauk, according to the New York Post.

The couple looked at a five-bedroom, 5.5-bathroom condo at the Residences at Gurney’s, which the Post claims was recently reduced from an asking price of $8.5 million down to $7.95 million. From what we see in this listing, it’s still listed for the higher amount, but maybe a discount is in the works.

The 4,157-square-foot duplex has floor-to-ceiling sliding glass doors and windows throughout, which lead from the entertaining rooms out to an oceanfront terrace.

The living space is anchored by a floor-to-ceiling gas fireplace, and open to an eat-in kitchen with a marble breakfast bar and stainless steel appliances. There’s also a separate formal dining room, for fancier occasions like an SNL viewing party.

The master suite is downstairs, with glass doors that lead to a private covered patio with a hot tub, and there’s also a walk-in closet and a bathroom with a marble vanity, glass shower and freestanding soaking tub.

So while we probably shouldn’t expect to spot the Avengers actress and Saturday Night Live comedian in coordinating Harry Potter outfits anytime soon (a girl can dream), they could be at their private owners’ beach cabana. Plus, this just so happens to be the same condo where Cindy Crawford and Rande Gerber reportedly spent July 4 weekend, so we already know it’s both supermodel and tequila-friendly. 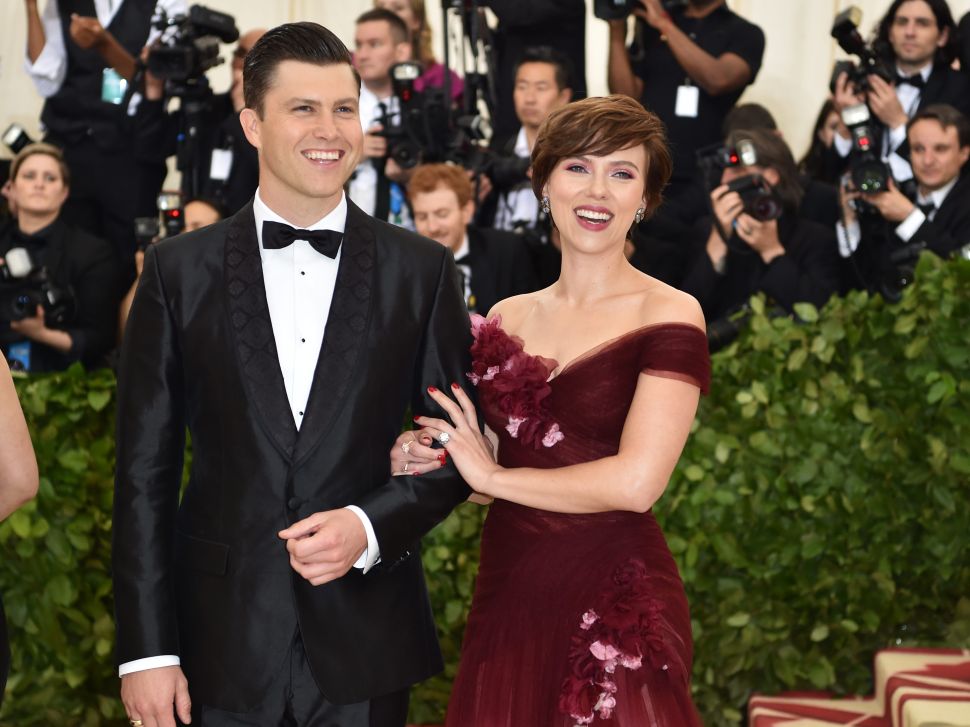