‘Sorry to Bother You’ should be an immediate Oscars contender. Annapurna Pictures

What if A Clockwork Orange were a comedy?

That’s the comparison that kept running through my head as I raced to keep up with Sorry to Bother You, which threatens to lose you to a tidal wave of thoughtful laughter. The directorial debut of rapper, producer, activist, screenwriter and filmmaker Boots Riley is, simply put, something else. Without venturing into the explosive minefield of spoiler territory, I’ll say that the movie borders on indescribable with its calculated eccentricities, so I’ll just cede the floor to Riley himself. At a TimesTalk following my screening, the director described his film as “an absurdist dark comedy with magical realism.”

Ebert, we’re not in Kansas anymore.

I’ve held off on writing this for a week so I could allow myself the necessary time and space to fully digest this supremely weird concussive blow of hysterical and biting social commentary.

Sorry to Bother You follows telemarketer Cassius Green (Lakeith Stanfield) in a dystopian not-too-distant future where he unearths the surreal key to professional success that unlocks the epitome of consumerism-drenched glory. As his friends and co-workers organize in protest of corporate oppression (this movie somehow turns the minutia of labor disputes into a high-wire act of laugh-so-we-don’t-cry revolution), Cassius is drawn in by the magnetic pull of his company’s cocaine-snorting CEO Steve Lift (Armie Hammer, hilariously leaning into the false Trust Fund Frat Bro narrative that has hovered around him his entire career). Lift offers Cassius a game-changing salary opportunity but at the cost of his morality.

With some distance from my immediate reaction walking out of the screening, I can safely now say that Sorry to Bother You is the best film of 2018.

Here are four reasons why you need to see it.

1. All of That Thematic Goodness

There’s a lot going on in Sorry to Bother You and yet the movie rarely feels unfocused or overstuffed. Like the delectable dietary debauchery of a bloomin’ onion, the film is coated in layers of different flavors that combine together for an incredible taste—until you remember how sickeningly bad it all is for you.

Sorry to Bother You serves up electric comedy and commentary over its first half to help you swallow the ugly pill that is the ills of society today, both overt and subtle. It explores the hows and whys of success and what it costs to attain it, not to mention the cultural barriers put in place to impede the progress of non-white individuals. It deals with cultural perceptions both internal and external; how do we view other groups of people and how do we view ourselves? Neither answer paints a pretty picture.

Cassius struggles as a telemarketer until a co-worker (played by Danny Glover because this movie is awesome) teaches him how to use his “white voice,” a David Cross-dub that makes callers on the other end feel more comfortable. It is only when he presents himself as white and contorts himself to fit the “majority’s” expectations and viewpoint, that he begins to excel.

Sorry to Bother You also takes a look at consumer culture, capitalism, the nexus of morality and success and labor force issues; think Idiocracy crossed with Get Out. Hammer’s Lift heads the Worry Free Living company, which signs workers to lifetime contracts in a 20th century twist on slavery. However, the masses are too apathetic to care as hundreds of millions tune into the most popular TV show around, I Got The Shit Kicked Out of Me, where contestants go on TV to, you guessed it, get the shit kicked out of them.

It’s all a beautiful disaster that accomplishes its goal of satirically challenging our perceptions.

The movie managed to alter my vantage point and forced me to think about cultural factors and biases I had never really considered before. It makes the seeds of the anti-capitalistic thought vomit of early beatnik hippies seem attractive. It’s cliche to say, but the movie really does hold a mirror up to society and force the audience to confront the ugly reality staring back at them (while softening the blow with gut-busting surrealist humor that actually accentuates its points).

2. You’ll Love These Characters and Performances

There’s a scene at the start of the third act in which Cassius is peer pressured by Lift and his other corporate white stooges to rap for a whole party full of people. The moment is meant to highlight what Cassius is supposed to represent to white people, as well as serve as a wake-up call for himself; he finally sees the immoral sellout he’s become. It’s poetic, heartbreaking, awkward, stupendously funny, and incredibly enlightening.

The scene is indicative of the entire movie’s layout.

Many of the story’s subtle exchanges portray a character saying one thing while trying to communicate another; it’s subtext 101.

Lakeith Stanfield as Cassius Green in ‘Sorry to Bother You.’ Annapurna Pictures

Through the journey, you see Cassius attempting to find himself by experimenting with different identities; revolutionary African-American, wealthy one percenter, committed lover, authentic friend, etc. In a way, he “finds himself through other people,” as Stanfield explained after the screening. Each mask he slips on teaches him something important.

None of this would work without Stanfield grounding this fantasy-nightmare-Willy Wonka trip with a naturalistic performance. He is the protagonist and audience surrogate through which all feeling and ideology flows. Sorry to Bother You is yet another impressive feather in the cap of this eclectic performer whose impressive resume already includes arguably the best show on television, Atlanta. Don’t get me wrong, the movie leaves ample room for supporting stars such as Tessa Thompson and Steven Yeun to shine. But this is his movie.

Come for the inventive cinematic experience, stay for the continued career blossoming of Stanfield.

3. The Storytelling Devices Are Surreal

Sorry to Bother You is absurd and surreal, and it largely revolves around its visual and audio storytelling tricks. The telemarketing scenes with Cassius in action physically plant Lakeith right into the kitchen, bathroom and bedrooms of his potential customers. Needless to say, he catches them in some vulnerable moments and compromising positions. There are other unique approaches at work, but I don’t want to spoil anything for you lucky viewers. Just go in with an open mind (like, wide open).

Then, you have the dubbed white voices, with David Cross, Patton Oswalt and Lily James each inhabiting a different character’s portrayal of the status quo. This makes for great bits of comedy both in the movie and reality—Riley spoke about how he assuaged Oswalt’s disappointment when he wasn’t cast as Cassius’ voice-over by explaining that Cross simply sounded much whiter, which soothed him—and just a wild way of filming the majority of dialogue. There are hilarious little mannerisms and affectations sprinkled throughout that will be familiar to anyone who has ever made a crowded morning commute into work or endured an insufferable conference call.

Riley manages to play with the disconnect between reality and fiction, or at least what we perceive reality to be through our own consumption of pop media. But there’s a danger to using too many gambits and gimmicks in that you can lose the emotional thread of your story. While the back half of Sorry to Bother You may stretch a bit too far at times, the movie so expertly deploys these creative tactics that it enhances the experience overall. 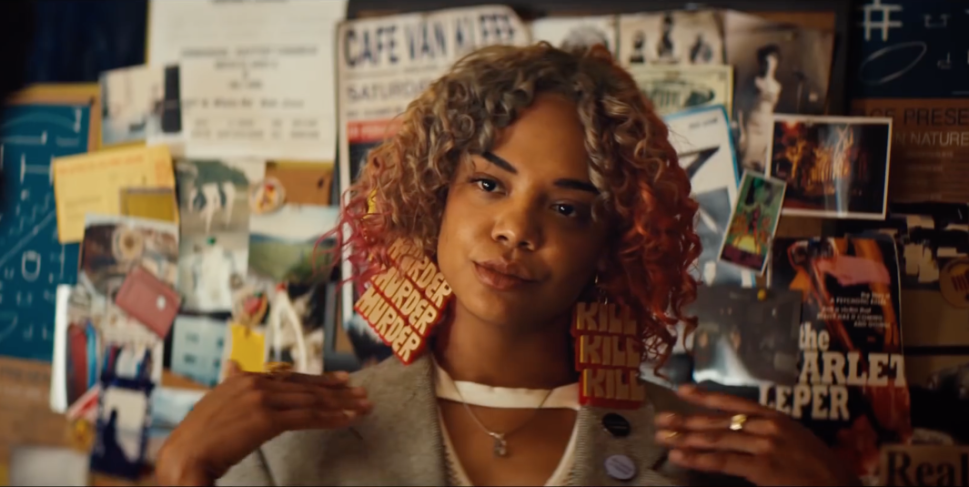 Tessa Thompson as Detroit in ‘Sorry to Bother You.’ Annapurna Pictures

Sorry to Bother You should absolutely be in the running for major awards come Oscars season, especially with Riley making such a phenomenal and singular directorial debut. The movie is a contender based on its own merits.

But it also comes at a time when the Academy of Motion Pictures Arts and Sciences is placing a greater emphasis on diversity. Earlier this week, the governing body invited 928 potential new members, coming from 59 different countries with a demographic breakdown of 49 percent female and 38 percent people of color. Assuming the invitations are accepted, Academy membership will rise to 31 percent female (28 percent previously) and 16 percent non-white (rising from 13 percent).

All in all, the changes should help shine a greater spotlight on films made by and starring individuals of color as well as women. Sorry to Bother You is the best film of the year so far regardless of who’s voting, but the Academy expansion will potentially help ensure that it isn’t left out in the cold come nomination time.

Do yourselves a favor and see this movie when it opens in limited theaters this Friday before hitting more cinemas across the country on July 13. It is unlike anything else out there.