The U.S. Supreme Court doesn’t know where to draw the line on partisan gerrymandering, so it continues to kick the can down the road. At this point, it is unclear if there will be any clear standard in place when New Jersey redraws its maps in 2021.

Republicans and Democrats are both guilty of partisan gerrymandering, seeking to draw the lines of legislative districts to benefit their own political parties. The practice is also centuries old, dating back to 1812 when Massachusetts Governor Elbridge Gerry became the first politician to manipulate redistricting to benefit his party. The manipulated district, which favored Elbridge’s Democratic-Republican Party, was shaped like a salamander, prompting The Boston Gazette to coin the term “Gerry-mander.”

While critics argue that the practice of partisan gerrymandering is unconstitutional, the Supreme Court has never fully addressed the issue, despite numerous opportunities to do so.

In Davis v. Bandemer, 478 U. S. 109 (1986), the Supreme Court held that political gerrymandering claims are justiciable because the majority was “not persuaded that there are no judicially discernible and manageable standards by which political gerrymander cases are to be decided.”

More than a decade later, the Court reversed course.

In Vieth v. Jubelirer, 541 U.S. 267 (2004), a four-member plurality concluded that political gerrymandering claims are nonjusticiable because no judicially discernible and manageable standards for adjudicating such claims exist. In a concurring opinion, Justice Anthony Kennedy agreed that no standard existed to address the redistricting map at issue in the case but declined to join the plurality in concluding that a solution could never be found. He wrote that “if workable standards do emerge to measure these burdens… courts should be prepared to order relief.”

In the October 2017 term that just ended in June, the Court had two additional opportunities to clarify when partisan gerrymandering goes too far. The justices punted in both cases, deciding them largely on technicalities and failing to reach the merits.

In Gill v. Whitford, the plaintiffs alleged that the Wisconsin Republican-drawn State Assembly map constitutes an unconstitutional partisan gerrymandering. A federal court agreed, holding that the plan was an unconstitutional partisan gerrymander in violation of both the Equal Protection Clause and the plaintiffs’ First Amendment freedom of association. In striking down the map, the court considered three factors: discriminatory intent; a large and durable discriminatory effect; and a lack of a legitimate justification. In granting certiorari, the Supreme Court agreed to consider the proper standard for determining what constitutes an illegal partisan gerrymander, among several other issues.

Rather than reach the merits, the justices unanimously concluded that the plaintiffs failed to demonstrate Article III standing because they had not shown any specific and individualized injury to their right to vote. Writing on behalf of the Court, Chief Justice John Roberts acknowledged that this was likely not the decision people wanted. He wrote:

“Over the past five decades this Court has been repeatedly asked to decide what judicially enforceable limits, if any, the Constitution sets on the gerrymandering of votes along partisan lines. Our previous attempts at an answer have left few clear landmarks for addressing the question… Our efforts to sort through those considerations have generated conflicting views both of how to conceive of the injury arising from partisan gerrymandering and of the appropriate role of the Federal Judiciary in remedying that injury.”

Nonetheless, this would not be the case in which the Court would determine whether the courts are the proper venue for remedying partisan gerrymandering. Based on the standing issue, the justices vacated the district court judgment and remanded for further proceedings.

However, should the case return to the Court, the more liberal justices appear ready to recognize a constitutional violation.

In a concurrence joined by Justices Stephen Breyer, Ruth Bader Ginsburg and Sonia Sotomayor, Justice Elena Kagan wrote that partisan gerrymandering is “incompatible with democratic principles.” She added that “only the courts can do anything to remedy the problem, because gerrymanders benefit those who control the political branches.”

In Benisek v. Lamone, a Maryland case involving a Democratically gerrymandered district, the Court again declined to reach the crux of the case.

The plaintiffs alleged that Democrat state officials responsible for Maryland’s 2011 congressional redistricting plan targeted them for vote dilution because of their past support of Republican candidates for public office, violating the First Amendment retaliation doctrine.

The Court declined to reach the issue, holding that the district court did not abuse its discretion in declining to issue a preliminary injunction. In its per curiumopinion, the Court noted the plaintiffs failed to seek the injunction until six years, and three general elections, after the 2011 map was adopted. It also agreed that a due regard for the public interest in orderly elections supported the district court’s discretionary decision to deny a preliminary injunction and to stay the proceedings. The case will now proceed in the lower court.

While there was some hope that the justices would address partisan gerrymandering next term, the Court also recently declined to consider a challenge of North Carolina’s redistricting map. It also sent that case back to the lower court to further consider a legal standing issue. Of course, some of the cases remanded back to the lower courts are bound to end up back before the Supreme Court. The question is whether the justices will rule in time to impact the next round of redistricting. 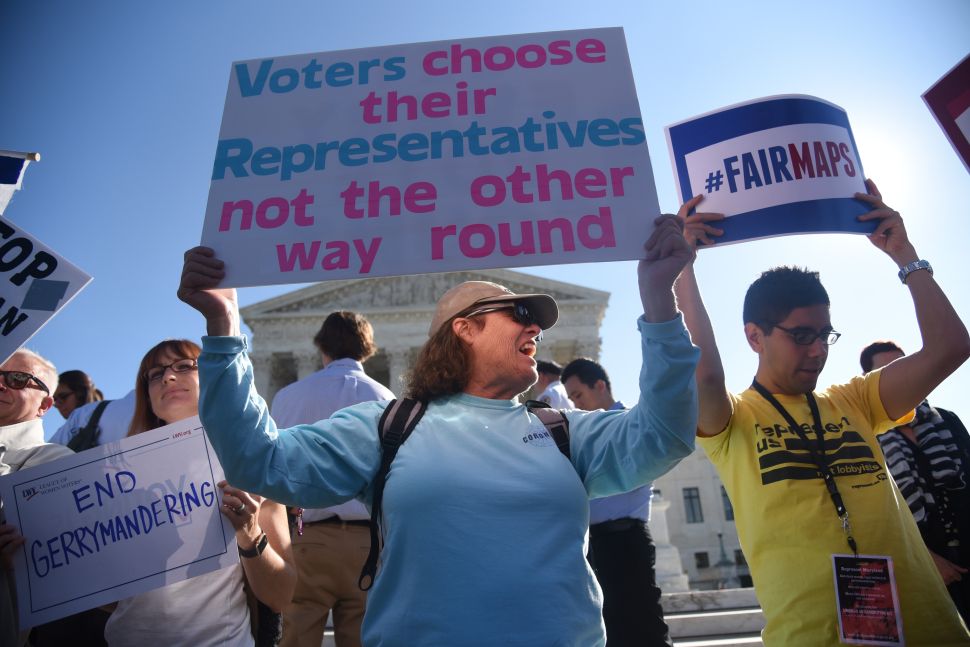