For a guy whose reality show opened with “For the Love of Money” by The O’Jays, it may seem that President Donald Trump’s chorus—music to Russian President Vladimir Putin’s ears—about NATO members’ paltry financial contributions is, as he claims, just about getting folks to fork over their fair share.

But, frankly, it’s not really about the money. It’s about the concept of the alliance that candidate Trump called “obsolete.” And discerning his meaning on every subsequent complaint isn’t much of a stretch when you see how much Trump has laid bare the intent of his “America first” pledges and his consistent laissez-faire attitude toward Putin’s bad behavior.

U.S. Ambassador to NATO Kay Bailey Hutchison told reporters on a call last week that 16 of the 29 NATO nations are on track to meet the two percent GDP defense spending pledge agreed upon at the 2014 summit. The target date for compliance isn’t until 2024.

After railing about NATO spending during a June 25 rally in South Carolina, Trump added, “Now it’s all wonderful, and we like to help out, but it helps them—they’re in Europe. It helps them a lot more than it helps us; we’re very far away.” Here, the administration’s otherism orthodoxy barrels in: it’s about them, those people, not our insular world. It’s about denying global interconnection of world events that won’t be shoved back in the bottle no matter how hard you try to retreat into isolationism.

At the G7 last month—where Trump refused to join the joint communique, reportedly chucked pocket Starbursts at German Chancellor Angela Merkel, and insulted host Justin Trudeau on Twitter after flying out of Quebec—the president reportedly declared, “NATO is as bad as NAFTA”—an apples-oranges comparison with the word “treaty” as the only common denominator, unless the aversion is really rooted in “globalist” acronyms. The comment reportedly came after Trump told other G7 members that Crimea should be Russia’s because they speak Russian—talking points to justify forced annexation (“invasion,” in plainspeak) straight from Kremlin propaganda—and that NATO is “much too costly for the U.S.”

One could get the impression he’s missing the nuts-and-bolts concepts behind critical alliances—or, more concerning, that Trump detests the concept of an equal-footing global alliance, wants “anti-globalist” red meat to toss at his base, and is interested in alliances with governments more authoritarian than democratic.

During a meeting last year with NATO Secretary General Jens Stoltenberg, Trump waxed about NATO being “no longer obsolete” because “now they do fight terrorism” (read: the pact of deterring Russian aggression, even with the seizure of Crimea confirming the threat, was rendered “obsolete”). Trump added, “It would be wonderful… if NATO and our country could get along with Russia.” It seems the promotion of détente that favors the Kremlin is as reliable as summer humidity in D.C.

In the run-up to his meeting with Putin, Trump has been dropping musings that will undoubtedly stoke an autocratic bromance: adding Russia back to the G8, withdrawing from the World Trade Organization, wondering if it would be better to drop out of NATO.

This week’s NATO summit promises to be fraught with easily triggered foot-stomps. If NATO allies note that North Korea hasn’t exactly given up their nukes in return for out-of-the-gate concessions, Trump will probably get peeved that his new “anti-globalist” pals are being questioned and give Putin some freebies just to show ’em. If Trump emerges from a Putin sit-down declaring that no more elections will see Russia’s meddling fingers (or, in a bigger whopper, no election interference happened in the first place because Vlad said so), we’ll know the Russian president recalibrated the White House threat radar.

Trump might go into his meeting with Putin thinking that teaching NATO allies a lesson will somehow will make Putin more pliable, when in reality Vlad is about as pliable as concrete. He plays you, not the other way around.

Obviously, this leaves a NATO that must protect the alliance against Russian aggression, with or without the U.S. Its members somberly realize that their words and actions at the summit may be fodder for the next Trump country rally or tidbits to deliver at his one-on-one confessional with Putin.

The degradation of NATO and its “obsolete” support of those “very far away “ countries ultimately has little to do with country contributions. If NATO members opened their checkbooks today, Trump would likely find another complaint with this alliance model. If NATO was on the rocks with an alliance-busting summit in Brussels, Trump would most definitely find a pleased-as-punch Putin in Helsinki. 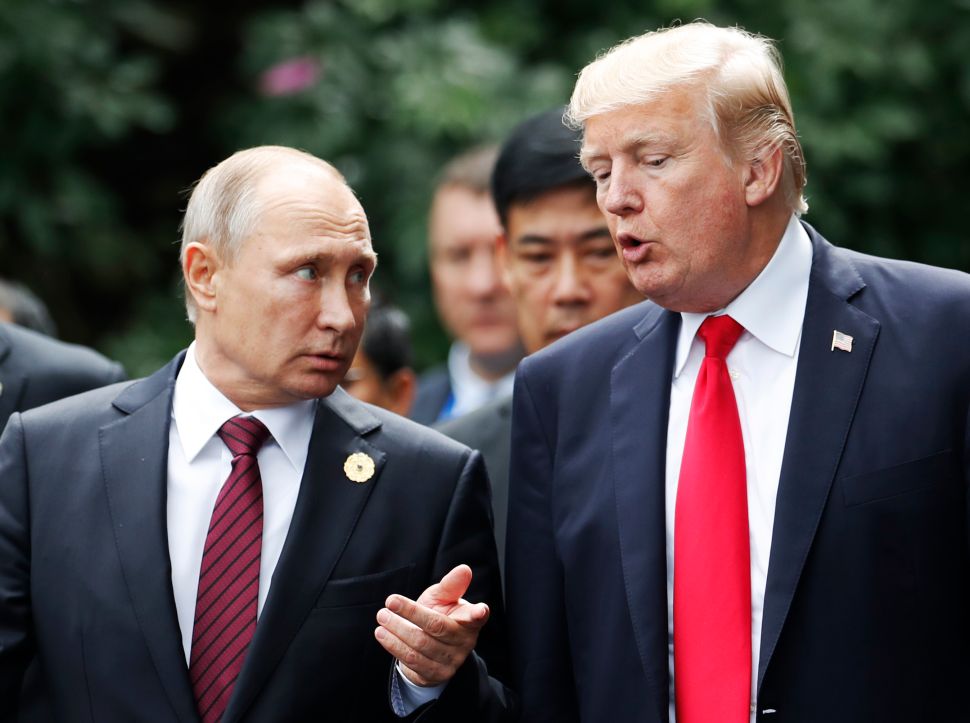