To lawyers and jurists, the name Kavanaugh means different things dependent upon which side of the pond you are raised. When I was training to be a barrister the name “Kavanagh” was the television character of that Queen’s Counsel that one could only dream of emulating. He was born of humble stock, had dragged himself up through a system that was geared to reinforcing class stereotypes and, when he had achieved the coveted QC title on his terms, took on and won those dream cases. You know the type, where the accused seems to be overwhelmingly guilty and but for scintillating oral skills, sheer determination and a stroke of luck, justice was served by the nearly convicted person walking free.

The American version does not quite have the same hardscrabble tale.

Trump’s nominee Brett Kavanaugh seems to have been destined, in utero, to be nominated to the Supreme Court. A son of two lawyers, sired in Washington and, just like the most recent nomination, attended the elite, all boys Georgetown Preparatory School (class of ’83). Yale University followed and backed up by Yale Law School, where he wrote for the Yale Law Review. Kavanaugh then clerked for an appeals judge of the Third Circuit, then the Ninth Circuit before clerking with Justice Kennedy on the Supreme Court, whose shoes it is sought for him to fill.

If one could write the near perfect resume to this point, it could not read better, but it needed a sprinkling of drama. That came on Kenneth Starr’s staff, investigating the death of White House Counsel Vincent Foster, the Clintons in Whitewater, and President Bill Clinton on Monica Lewinsky. In the latter scandal, Kavanaugh was the lead author of the Starr Report, which laid out firm grounds for presidential impeachment (he might have changed his mind since then). Showing a glimpse of an interesting streak, Kavanaugh pushed for a much more racy and direct cross-examination of Clinton on the salacious details made public by Lewinsky but the eventual questioning was very tame.

Dipping briefly into private practice with Kirkland and Ellis in D.C., Kavanaugh assisted George W. Bush in the 2000 presidential Florida recount and then was his White House Counsel before being nominated to the D.C. Circuit Court of Appeals. Curiously, Kavanaugh had genuine roles in some of the most influential Republican events of the past 30 years.

When it comes to pure legal credentials, it does not come much better than Kavanaugh. Where I am concerned, however, is that he does not seem to bring to the Supreme Court anything exciting or different such that his nomination will better the law. He openly stated “My judicial philosophy is straightforward. A judge must be independent and must interpret the law, not make the law…” This smacks of a lack of judicial bravery, an essential quality for a Supreme Court Justice, in my view. Maybe this is because Kavanaugh’s resume is incredibly insular, the fact that was never really a trial lawyer, or the steady diet of administrative cases in the District of Columbia. In any event, President Trump may have missed an opportunity to appoint something other than an Ivy-League educated, Washington born, white male who has only lived and worked in rarified environments.

Democratic, knee-jerk denouncements are unfounded. Kavanaugh is a proper legal brain and, according to some Republicans is not conservative enough. They cite his failure to rule that Obamacare was unconstitutional and critics from the right have been disconcerted by Kavanaugh’s more mild approach to intimating that he is judicially pro-life. One trusts that his time with Justice Kennedy rubbed off a little, who demonstrated that being openly Republican does not demand maintenance of 18th century social values in adhering to the Constitution.

However, while it is likely the Supreme Court will drift starboard, the current will not be as strong as it might have been with the nomination of others. I might send, Justice Kavanaugh some Kavanagh QC DVDs just to be cheeky but with the hope that it might inspire him to fight for the individual.

The rest of us should just keep calm and carry on. 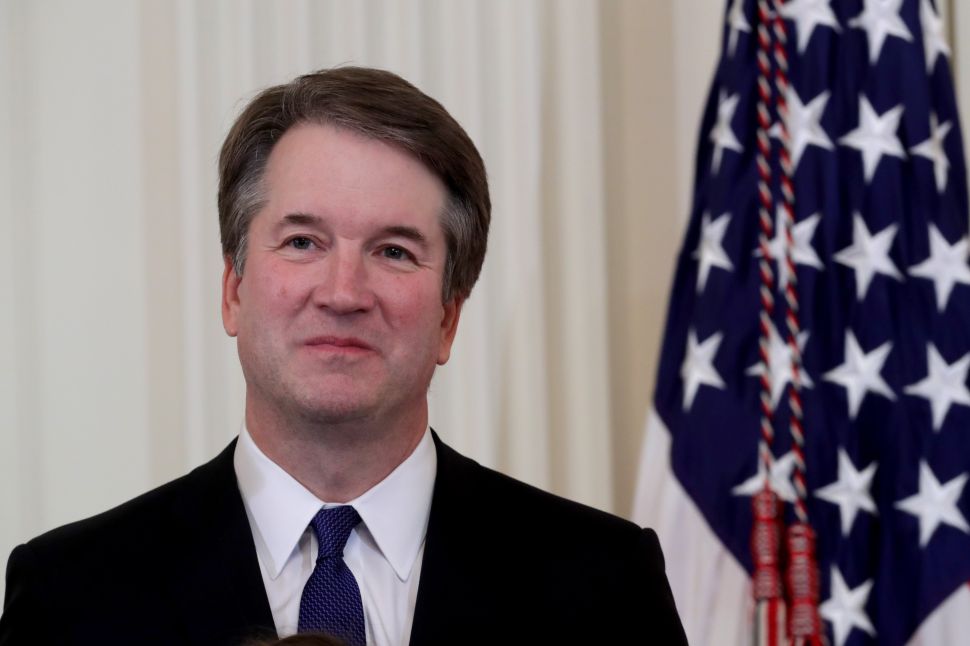