I’ve been a hardliner regarding Iran my whole professional life. During my time in the Intelligence Community, I favored aggressive approaches to countering Tehran’s misdeeds abroad. What I witnessed in the Balkans in the 1990s convinced me that revolutionary Iran is a bad actor on the international stage which needs containment, not an olive branch or any good-faith deal which the clerico-fascist mullah regime in Tehran will inevitably breach.

The ugly foreign operations of Iranian intelligence and the Revolutionary Guards Corps, the notorious Pasdaran, including espionage, terrorism, assassinations, and subversion in Europe, formed the basis of the detailed exposé I published after I left the spy business. That book remains the definitive work on Iran’s secret war, including alliances with jihadist terrorists, waged against the West.

Nevertheless, what the Trump administration is doing now is more dangerous than anything Tehran has done in recent decades to destabilize the Middle East. Although the Trump White House’s aggressive posture toward Iran has been prominent from its first day in office, 18 months ago, the president has recently upped the ante, with results that may prove catastrophic.

It wasn’t enough to trash his predecessor’s Iran Deal (an agreement which I opposed), pulling the United States out of that multilateral agreement. Shredding Barack Obama’s grand bargain with Tehran now is worse than the deal itself, and it means that diplomacy with Iran is off the table, since Tehran has no reason to trust any “deal” Trump proffers.

That leaves Washington with only hard means to shape Iranian behavior: more sanctions and military options. Rhetoric between President Donald Trump and the mullahs reached fever pitch late Sunday night, when—in apparent response to a statement hours before by Iran’s president that “war with Iran is the mother of all wars”—our president belched out an all-caps tweet which was hysterical and unhinged even for Donald J. Trump: “To Iranian President Rouhani: NEVER, EVER THREATEN THE UNITED STATES AGAIN OR YOU WILL SUFFER CONSEQUENCES THE LIKES OF WHICH FEW THROUGHOUT HISTORY HAVE EVER SUFFERED BEFORE. WE ARE NO LONGER A COUNTRY THAT WILL STAND FOR YOUR DEMENTED WORDS OF VIOLENCE & DEATH. BE CAUTIOUS!”

This was an unambiguous threat of war, yet the next morning, rather than walking it back, John Bolton, the president’s national security adviser, a notorious fire-breather when it comes to the Iranian regime, added fuel to the fire with this statement: “I spoke to the President over the last several days, and President Trump told me that if Iran does anything at all to the negative, they will pay a price like few countries have ever paid before.”

In response, Tehran mocked Washington’s aggressive puffery, and last night Mohammad Javad Sharif, the foreign minister, tweeted: “COLOR US UNIMPRESSED,” noting that Iran is an ancient civilization which has seen a lot worse over the last several millennia than anything any trash-talking American can threaten via social media.

What to make of this war-by-tweet? Trump seems to think that he can replay his North Korean game, where a series of angry tweets led to his strange summit in Singapore with Kim Jong-un. Trump continues to hail his parley with Pyongyang as an epic victory, notwithstanding that our Intelligence Community assesses that our president gained no concessions of substance from the wily North Koreans. Pyongyang simply has no intention of giving up its nuclear weapons, no matter what President Trump may tweet.

Moreover, the White House is deeply misguided if it thinks tweet-threats can cow Tehran into submission. The regime knows that key members of Team Trump, John Bolton preeminently, have publicly called for regime-change in Iran. Therefore, standing up to Trump is good politics for Rouhani and Zarif, who know that Iranians, even those opposed to the regime, don’t like to be bullied by foreigners who think they have the right to overthrow Iran’s government and crush its economy.

There’s no reason for either side to back down now. In fact, things promise to get worse, soon. Our economic sanctions on Tehran, hiked back as part of Obama’s Iran Deal, will be reinstated in mid-August, while the White House’s efforts to cut Iran’s trade ties with Europe by November—above all, to get countries to stop buying Iranian oil—threaten the mullahs with economic collapse.

That’s the point of Team Trump’s Iran policy, with Mike Pompeo, America’s top diplomat, sounding just as aggressive as Bolton. A few days ago, Pompeo, in very undiplomatic language, urged Iranians to overthrow the regime, which he described as “something that resembles the Mafia more than a government.”

Putting your enemy on “death ground” was considered a strategy guaranteeing strong pushback by Sun Tzu a half-millennium before Christ, but Trumpers missed that memo. Unsurprisingly, Tehran isn’t taking the American threat to strangle its economy lying down. Earlier this month, Qassem Solemani, the Middle East’s master spy, a shadowy figure who heads the Pasdaran’s secret operations abroad, tweeted that President Rouhani’s “valuable statement that said there will be no guarantees for oil exports from this region unless the Islamic Republic of Iran (can) also export its oil was a source of pride.”

In other words, American moves to shut off Iranian oil exports will be met with retaliation, presumably that Tehran will shut down the Strait of Hormuz, between Iran and Oman, which handles one-third of the world’s oil tanker movements. That would throw global markets into chaos and worse. The U.S. Navy would clear the strait in a few days, taking out Iran’s small but tenacious naval forces, but not without losses on our side. The United States and Iran would then be an open, shooting war.

What happens next? Our Central Command has planned these operations for years and the script is well understood in outline. Waves of U.S. airstrikes would follow, over days, led by stealth bombers, to take out Iranian command and control nodes, disable the regime’s outmoded air force, and inflict damage on Tehran’s nuclear-related infrastructure.

Then what? Optimists in Washington—frequently the same people who 15 years ago promised that Iraqis would greet American invaders with flowers—anticipate that angry Iranians will cast out the mullah regime. But what if they do not? What if, instead, American attacks lead to greater support for the regime, which gains in popularity for standing up to U.S. aggression? I’ve participated in Pentagon war games for Iran and though I can’t say much, because such exercises are classified, let me state that anyone who thinks the mullah regime can be toppled with a few days of airstrikes is pitifully naïve.

Does the Trump White House want an invasion of Iran, in other words, Operation PERSIAN FREEDOM? That would require total mobilization of our military. Iran has more than twice the population and almost four times the area of Iraq, plus much of Iran is mountainous. Subduing that country would require the entire strength of the U.S. Army and Marine Corps, active and reserve, and there are no guarantees that Operation PERSIAN FREEDOM would not result in a protracted counterinsurgency campaign. Indeed, it most likely would. Here the Pentagon’s inability to subdue smaller and more primitive Afghanistan after 17 years of trying does not provide confidence.

To say nothing of the regional and global effects of America engaging in yet another war of choice in the Middle East. War with Iran will collapse the tired U.S. military, which is weary from a generation of failed wars in that region, while shredding what remains of American prestige and power on the world stage. To sum up, there are no military options vis-à-vis Iran which any sane, reality-based strategist wants to contemplate.

Why, then, is the Trump administration egging Tehran into war? It may not be coincidental that Bolton (like the president’s consigliere Rudy Giuliani) are affiliated with an Iranian anti-regime terrorist group which dispenses cash to friendly Westerners. Neither may it be pure chance that Bolton, and the president too, are chummy with Sheldon Adelson, the famously aggressive Republican mega-donor who advocates not just regime change in Tehran, but actually nuking that country.

Plus, war with Iran would surely distract Americans from the Special Counsel inquiry into Trump’s Russian connections, at least for a while. It’s foolish to think Operation PERSIAN FREEDOM can halt Robert Mueller and his investigators, but judging from his increasingly panicked tweets, the president may just be buying time before the prosecutorial boom falls on him and his family.

Right now, the only cabinet member clearly blocking the war with Iran that’s desired by the Trump-Bolton-Pompeo triumvirate is James Mattis, our defense secretary. Mattis understands strategic realities and, like our top military leadership, wants nothing to do with a shooting war with Iran. There’s palpable irony here, since back in 2013, when Mattis was a serving Marine four-star general, he was cashiered by President Obama in the rudest manner possible because, as CENTCOM commander, Mattis wanted a tougher line towards Tehran, which was an obstacle to Obama’s desperately sought Iran Deal.

Mattis, an avid reader of history, knows what happened in the summer of 1941, when President Franklin Roosevelt, seeking to curb Japanese aggression in China, froze Tokyo’s foreign assets and cut Japan off from world oil markets. Tokyo didn’t stop its invasion of China, instead deciding that economic war required a military pushback. Japan’s attack on Pearl Harbor and the Great Pacific War followed. Perhaps Secretary Mattis can tell President Trump about this before the White House goads Iran into a war that the United States cannot win. 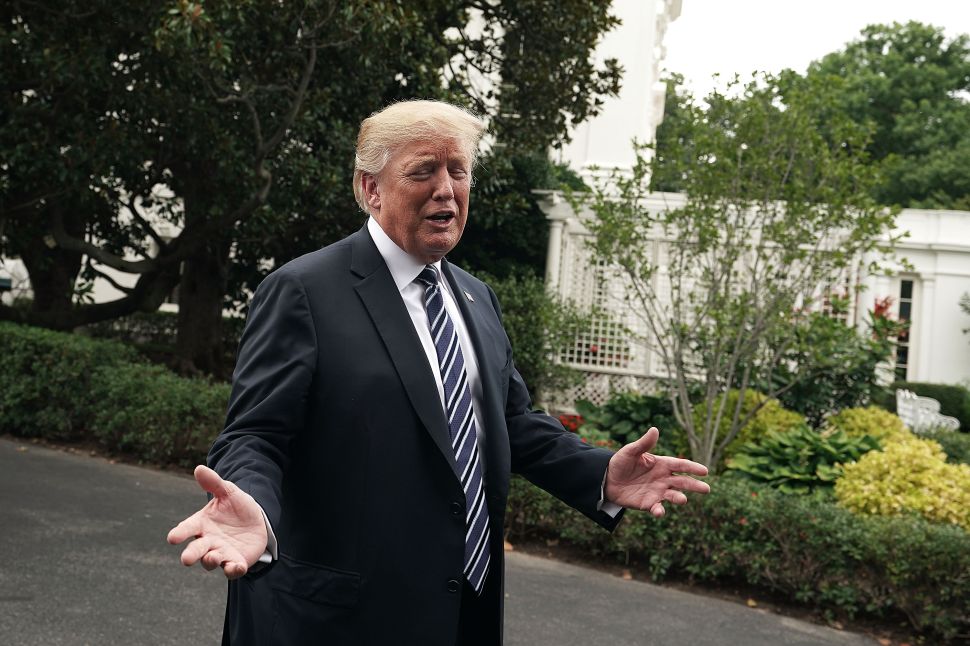