The Trump administration’s “possible war of the week,” it seems, is with Iran. Late on Sunday night, the president exploded on Twitter, breaking out the all-caps button to give Iranian president Hassan Rouhani a piece of his mind.

Earlier on that day, July 22, Rouhani issued a relatively boilerplate (by Iranian rhetoric standards, at least) threat toward the U.S., urging Trump to “stop playing with the lion’s tail” and make peace with Iran, or be prepared to fight the “mother of all wars.” Trump responded in kind (but with more capital letters and fewer cool lion’s tail analogies):

To Iranian President Rouhani: NEVER, EVER THREATEN THE UNITED STATES AGAIN OR YOU WILL SUFFER CONSEQUENCES THE LIKES OF WHICH FEW THROUGHOUT HISTORY HAVE EVER SUFFERED BEFORE. WE ARE NO LONGER A COUNTRY THAT WILL STAND FOR YOUR DEMENTED WORDS OF VIOLENCE & DEATH. BE CAUTIOUS!

For healthy men of a certain age, presidential saber-rattling carries a very distinct fear: that maybe this will be the big one, and the military will start up the draft again.

Fortunately, there’s good news: experts say that the chances of Trump reinstating the draft are very, very low—even if we were to invade Iran. But Amy Rutenberg, an assistant professor at Iowa State University whose work focuses on the draft of American citizens, says that why the U.S. wouldn’t restart the draft is a little bit more complicated.

“What it really has required in the past is a feeling of mortal danger, in a conflict that must be fought,” Rutenberg told Observer. For decades of modern history, the Soviet Union and global communism represented this mortal danger, which allowed the U.S. to effectively run an active draft from the end of World War II straight through to Vietnam.

Politicians and military recruiters sought, successfully, to recreate a similar feeling of mortal danger after 9/11. But Rutenberg pointed out that even the largest attack on U.S. soil since Pearl Harbor wasn’t enough to trigger Congress into reinstate a draft.

“The bar for starting a new draft would be incredibly high,” Rutenberg said. “I’m not even sure what it would be. I think the Vietnam generation would have to have passed, or the threat of attack would have to be catastrophic.”

Rutenberg said that as the continuous Cold War-draft marched on, the country saw a demographic shift in who, exactly, was fighting its wars. Deferments from the draft—circumstances like medical conditions or college enrollment—became easier to get after the mass mobilization of World War II, shifting the brunt of conscription onto populations that were less likely to find a reason not to go.

President Trump, for example, received five separate draft deferments for Vietnam—four in college, and one for the infamous “bone spurs” in his feet. More than a million other Americans weren’t so lucky, especially people who couldn’t afford to attend college or claim their job was an “essential civilian operation.” And in Vietnam, draftees disproportionately found themselves on the front line, as they rarely had any choice over their military occupation and were subsequently placed in the infantry.

After Vietnam, with public support for war and opinion of the military at an all-time low, the U.S. transitioned into a volunteer military, moving away from conscripted troops on the front line. But funnily enough, modern recruitment still targets the same populations the draft did.

Without conscription, Rutenberg says the military has turned to a strategy of enticement—offering benefits, higher pay, job stability and promises of future advancement like the G.I. bill. Just like an upper-middle-class kid from Queens could skip the draft with college and a cushy diagnosis of bad feet, a middle-class kid whose parents have a great health insurance plan and money for his tuition isn’t going to be very enticed by the promise of Veterans Administration healthcare and a hard job that pays less than $40,000 a year. But to someone from a poor family, with little prospects for college or a steady job, that may sound like a pretty good deal.

“One of the flip sides of not having conscription,” Rutenberg said, is that “the majority of our military are people who don’t necessarily have a lot of political power. If you have the middle-class and the upper-class children fighting, then you have the powerful people, their parents, who will be advocating not to have those wars in the first place.”

This dynamic is so pronounced that the last serious call to reinstate a draft came not from the typically war-friendly right, but from the left. In 2003, Democratic Congressman Charlie Rangel, a veteran of the Korean War, introduced a bill to reinstate the draft, arguing that Congress would be less likely to vote to send people off to war if they actually had some skin in the game.

“I believe that if those calling for war knew their children were more likely to be required to serve—and to be placed in harm’s way—there would be more caution and a greater willingness to work with the international community in dealing with Iraq,” Rangel wrote.

And if Trump does invade Iran, there’s another simple problem impeding the draft: the government doesn’t even have enough people to organize it. In 2012, the Government Accountability Office found that Selective Services, the branch of government that administers a draft, was so understaffed it would take them nine full months to call anyone up.

That being said, if the president’s tweets are any indication, our wars in the Middle East aren’t going to end anytime soon either. 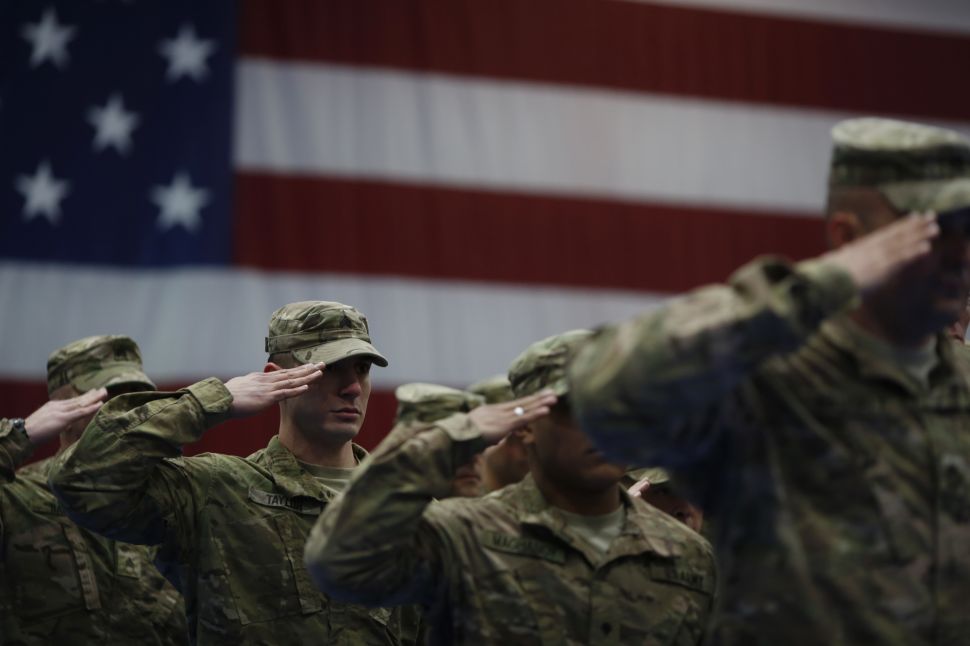