Bachelor in Paradise participants are almost psychopathically willing to humiliate themselves on camera, and almost nowhere is that more true than during the show’s beloved opening credits, which act as a brilliantly cheesy sendup of corny soap operas while also reminding viewers what the cast members are known for within the Bachelor universe.

Die-hard BiP devotees go absolutely nuts for the debut of the credits every year, which is fitting because they perfectly set the show’s tone. Bachelor in Paradise never takes itself too seriously.

As a truly awful song called “Almost Paradise” plays, every person gets a brief introduction lasting no more than a few seconds, during which they use props or goofy scenarios to give the audience a sense of their personality. The Season 5 opening credits are just as incredible as in previous seasons—perhaps even more so given the size of the cast.

However, the question remains: Who got the best intro? And on the other side of the coin, whose intro was so bafflingly dumb it rang in your head for days afterward like an annoyingly close-by fire truck siren? Wonder no more, because Observer has ranked the Season 5 Bachelor in Paradise intros in ascending order, from worst to best. (Note: We’ll update this post as the season progresses and eliminations pile up). 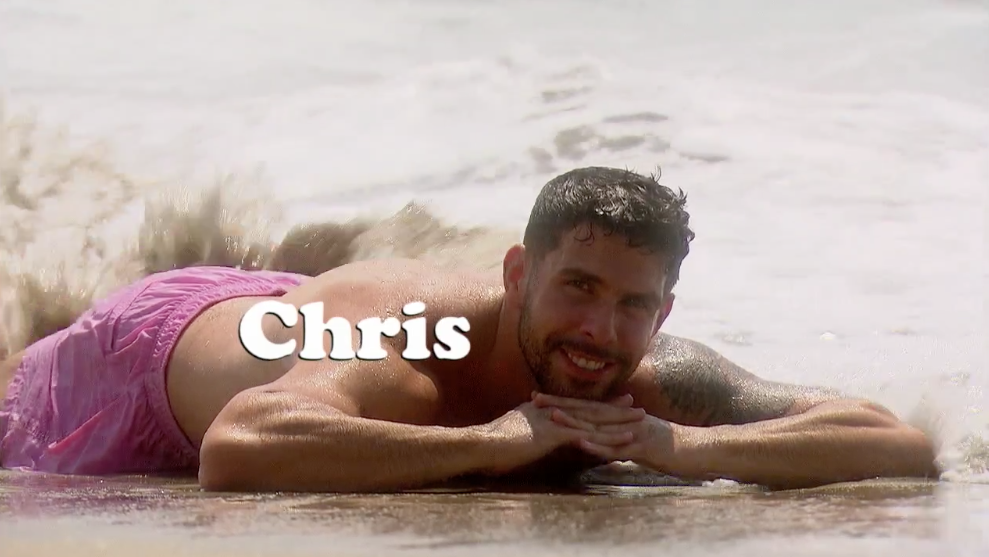 Chris has quickly established himself as the most annoying person on Bachelor in Paradise, so it makes sense that his intro is the dumbest one of the bunch. Chris is reasonably handsome and has a nice body, but you’d never be able to tell because he’s lying on his stomach on the beach and his face is hidden in shadow! At one point he’s deluged by a wave, which is pretty funny, but not funny enough. Big swing and a miss. 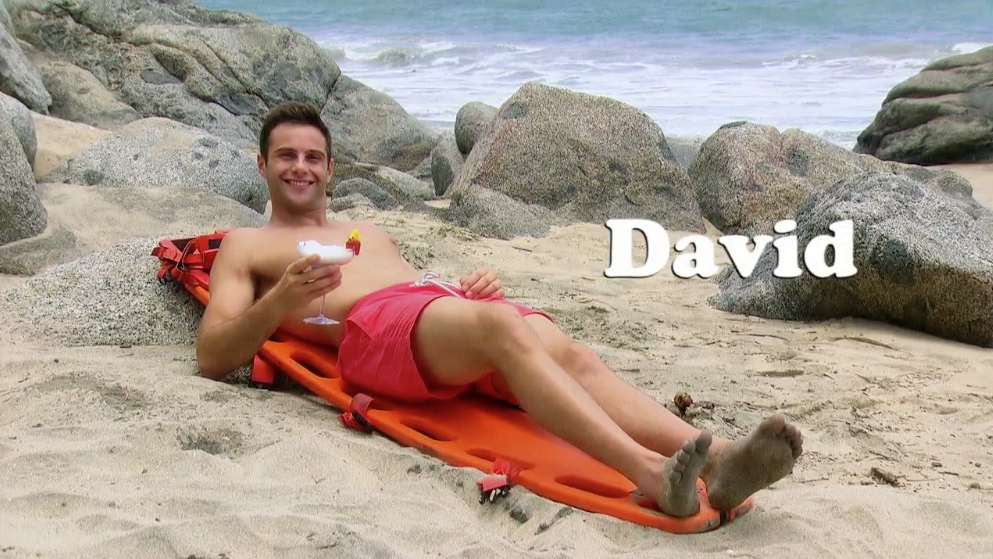 Another lying-down one! Maybe we’re just biased against this pose, but David’s clip really isn’t doing anything for him or us. He’s reclining on a lifeguard’s rescue board and holding a frozen cocktail, so he gets props for sticking with the Paradise theme, but overall this intro is just too static and not at all creative. Sorry, David. 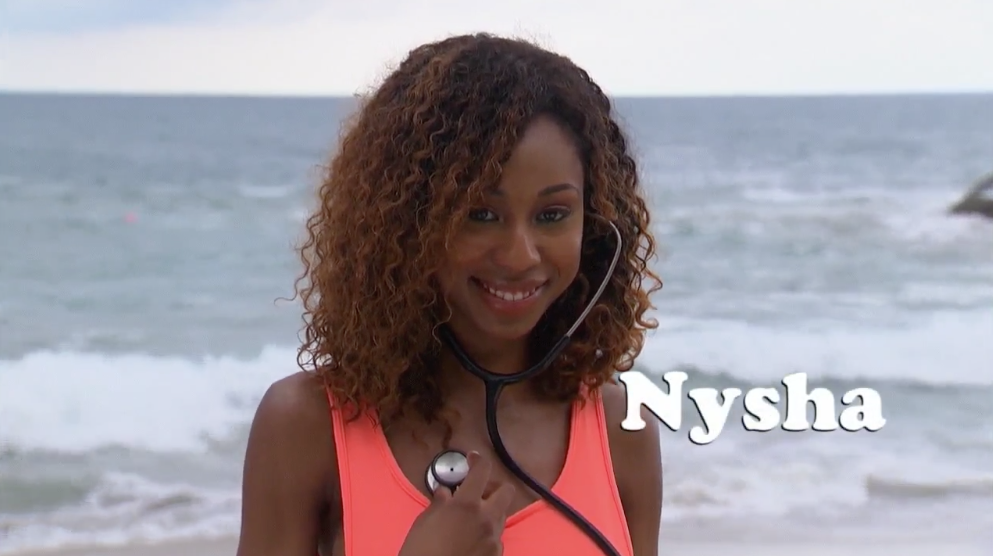 We feel bad, because we really want to love Nysha. She’s gorgeous, seems nice, and is a registered nurse, which immediately puts her leagues above her fellow cast members intellectually. Several episodes in, though, it’s clear that Nysha is boring, and, fittingly, so is her intro. All she does is smile wanly while wearing a stethoscope. Because she’s a nurse, get it? 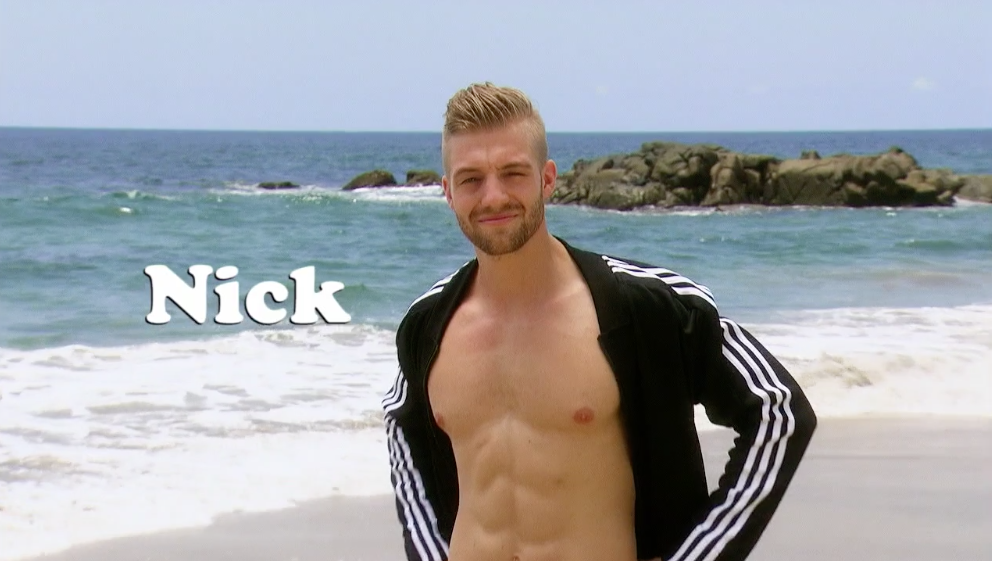 We hate Nick’s stupid face, his flesh-colored beard and his outdated haircut, but his intro’s douchebag energy at least hinted at something resembling a personality. Nick was eliminated the first week, though, so clearly there’s as little to him as this clip implies. Next! 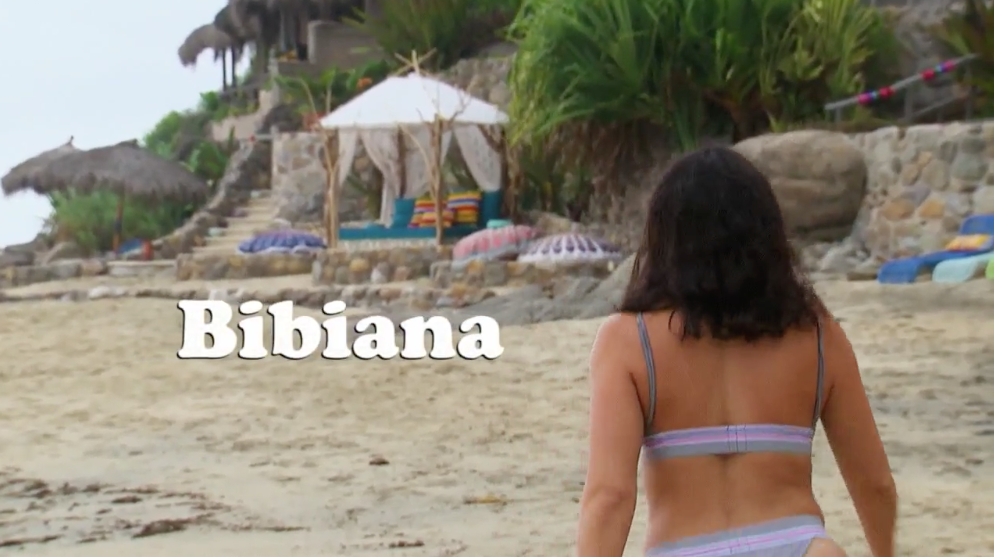 Bibiana’s intro is baffling, especially considering how fantastic she is as a semi-villainous shit-stirrer this season. She’s opinionated and sexy, and the producers were clearly aiming to play up her propensity for saying whatever thought pops into her mind when they shot this clip, which shows Bibiana dropping a microphone in the sand and then huffily storming away. But the whole thing just looks bad; the mic is visible for maybe a fraction of a second, and then we’re treated to a boring shot of Bib’s back. Good concept, dreadful execution. 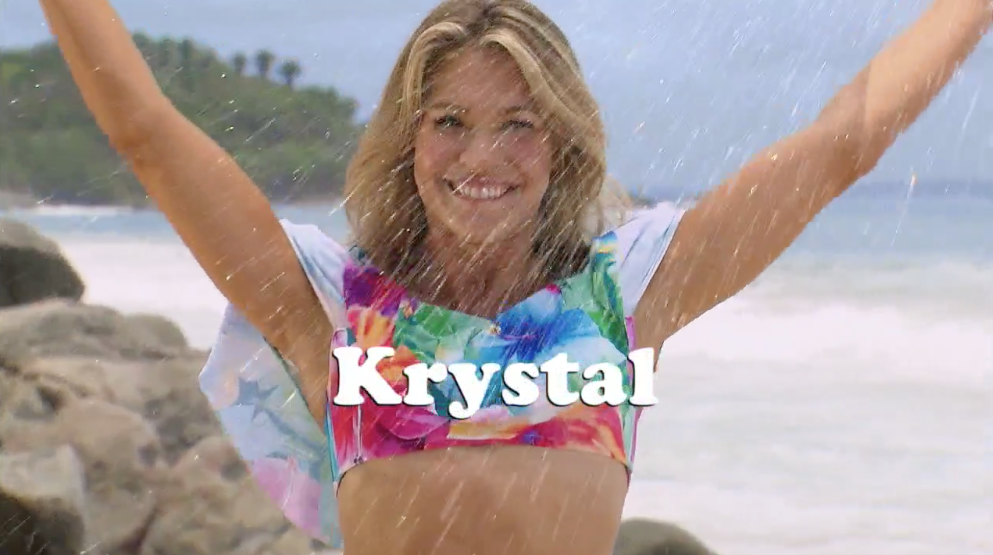 Krystal’s intro is a reference to a moment during Arie’s season when she pantomimed throwing glitter at the camera after refusing to attend a cocktail party with other women on the show. So, Krystal’s clip gets points for inside baseball Bachelor lore (the message is “Krystal is crazy”). But overall, this intro is silly and looks a bit weird on camera. 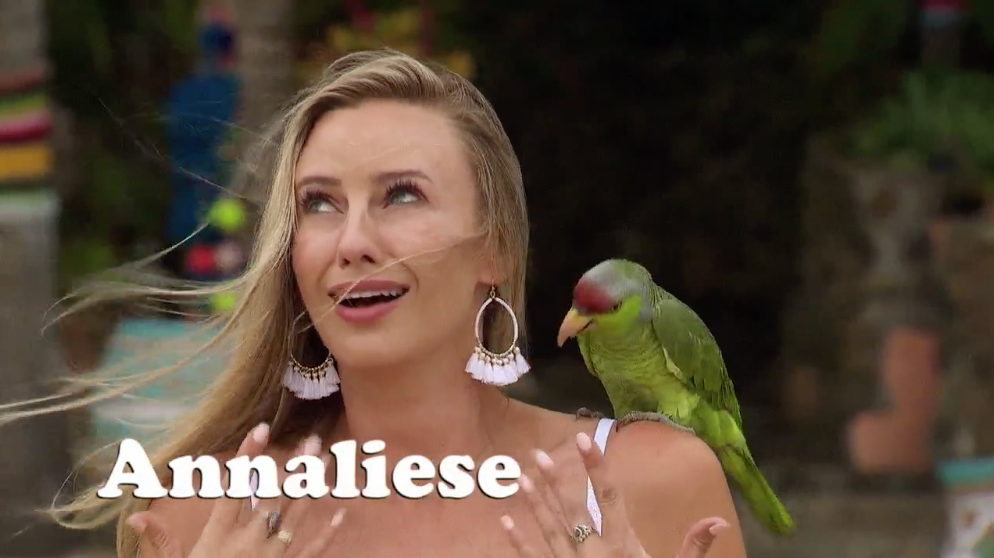 This clip is also a Bachelor canon callback: Apparently “Bumper car trauma” Annaliese is scared of everything, which predictably includes birds. Is there a word for people who have a phobia of people with phobias? If so, we have this phobia. Annaliese’s anxiety gives us anxiety. 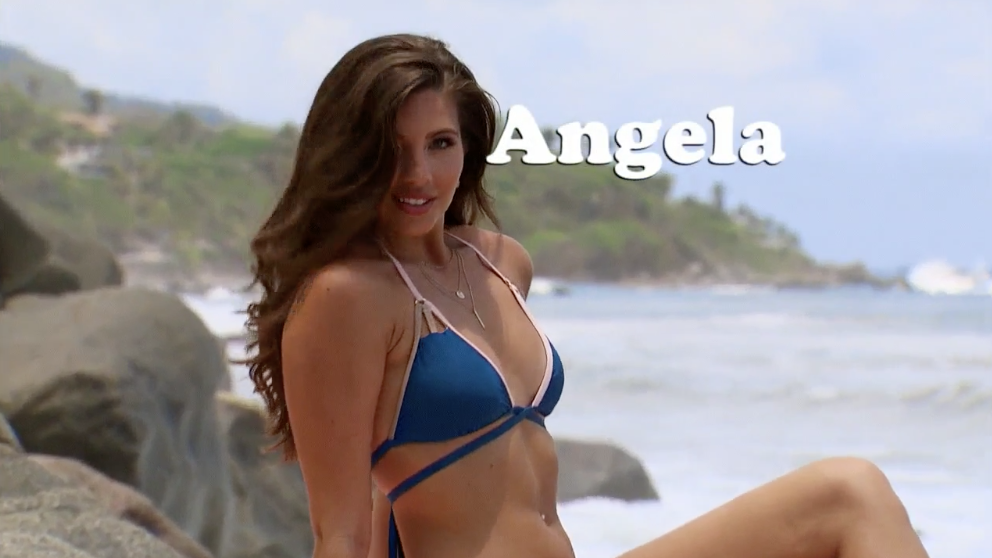 We actually like Angela’s intro, but seeing as how it’s not funny, it doesn’t crack the top 10. Nevertheless, she looks amazing, despite the fact that as a hot brunette she looks like half the other girls on this season. The way her hair cascades over her face is really nice. 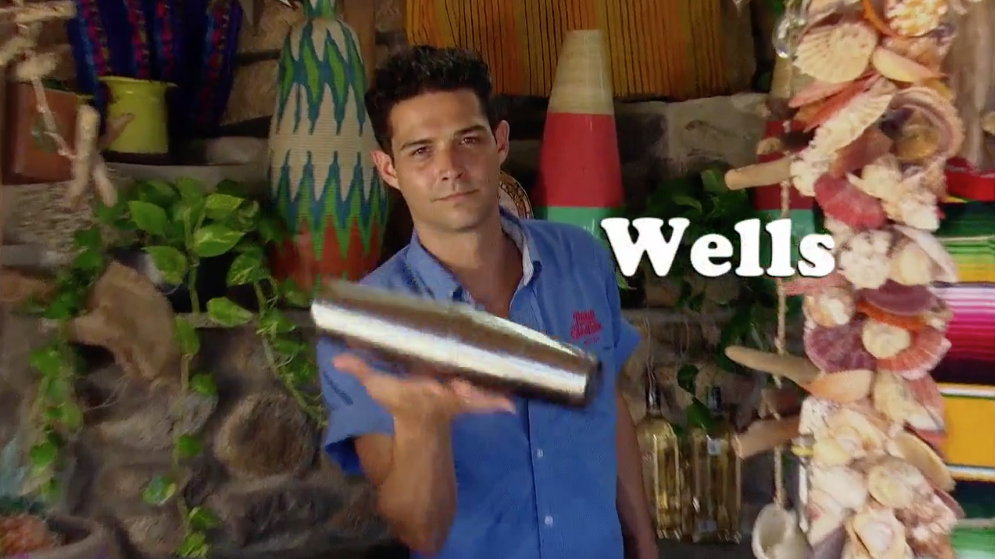 Wells is the Bachelor in Paradise bartender this season, and he’s not happy about it. After romancing incurably weepy virgin Ashley I. as a cast member in Season 3, Wells has been demoted to slinging cocktails and looks hilariously dead behind the eyes, despite the fact that he’s currently dating Modern Family actress Sarah Hyland. Cheer up, Wells! 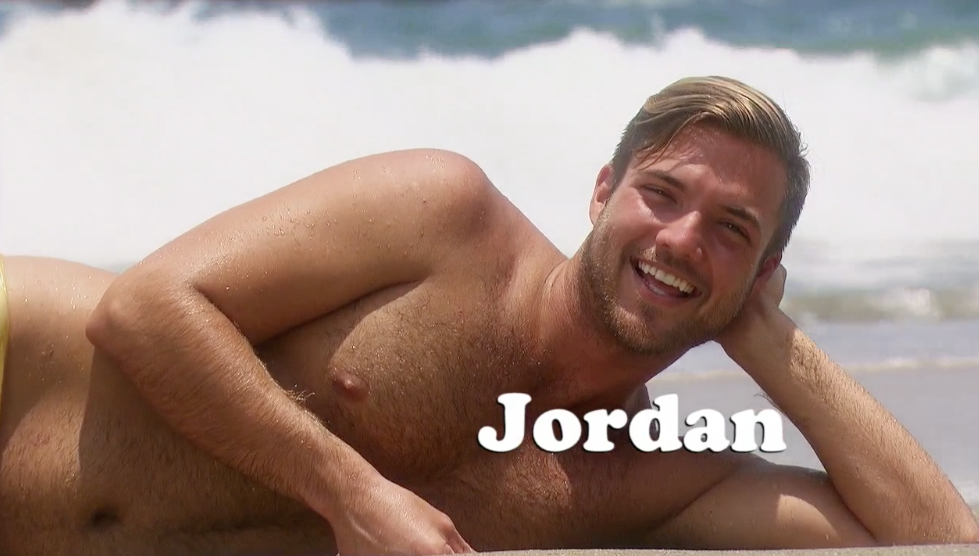 Jordan’s intro is…fine. He’s smiling like a lunatic and appears to be almost nude, so even though there’s not a lot going on here plot-wise, we still find the clip to be reasonably charming. 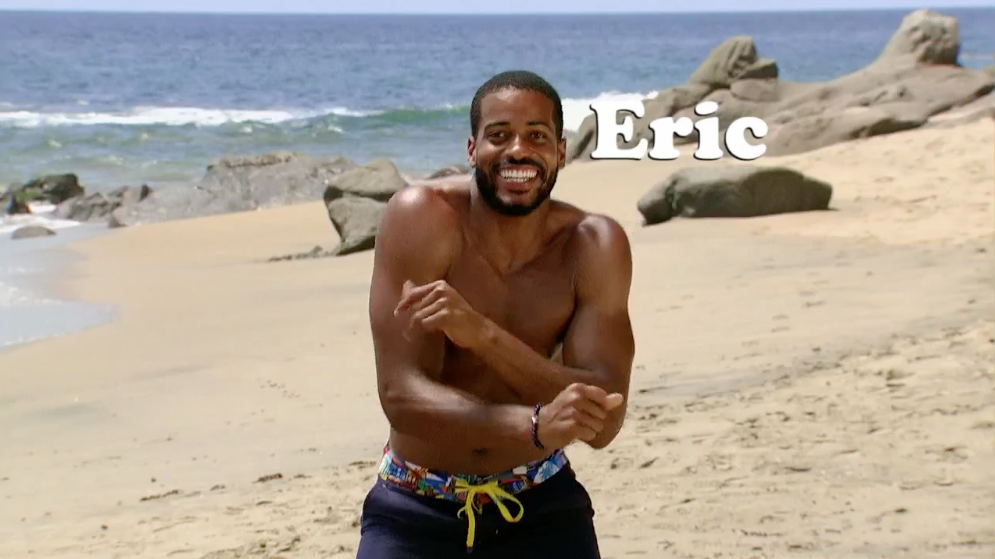 Eric and Kenny are essentially doing the exact same thing in their intros, but Eric ranks just shy of Kenny because he doesn’t do a backflip in his clip. That said, Eric’s smile is infectious and his dance moves are killer, and we have a crush on him (which is the whole point of the show). 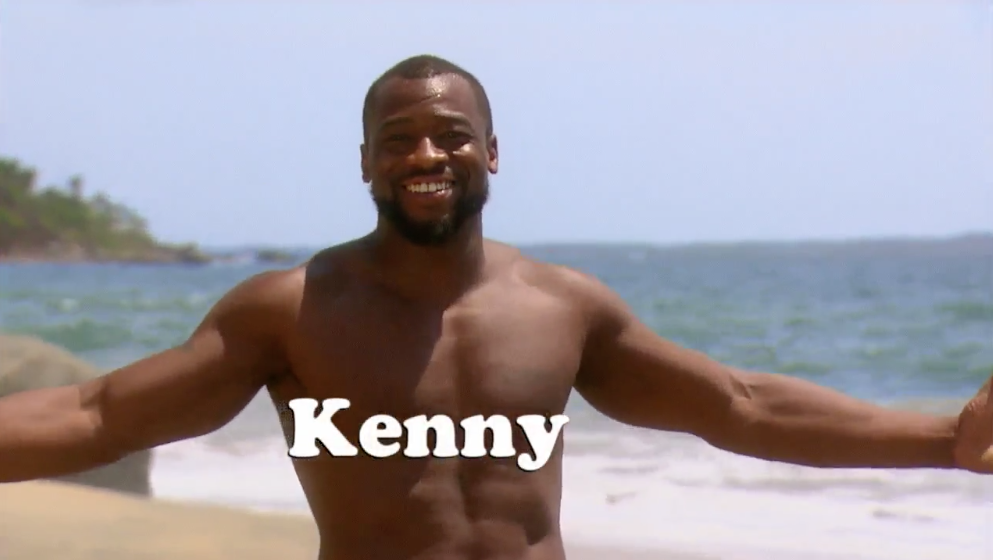 Kenny is RIPPED! This is the only thing his intro wants us to know about him, and honestly we’re fine with it. Kenny is serving you a full back handspring, a huge grin and wide open arms just waiting for a hug. LOVE IT. 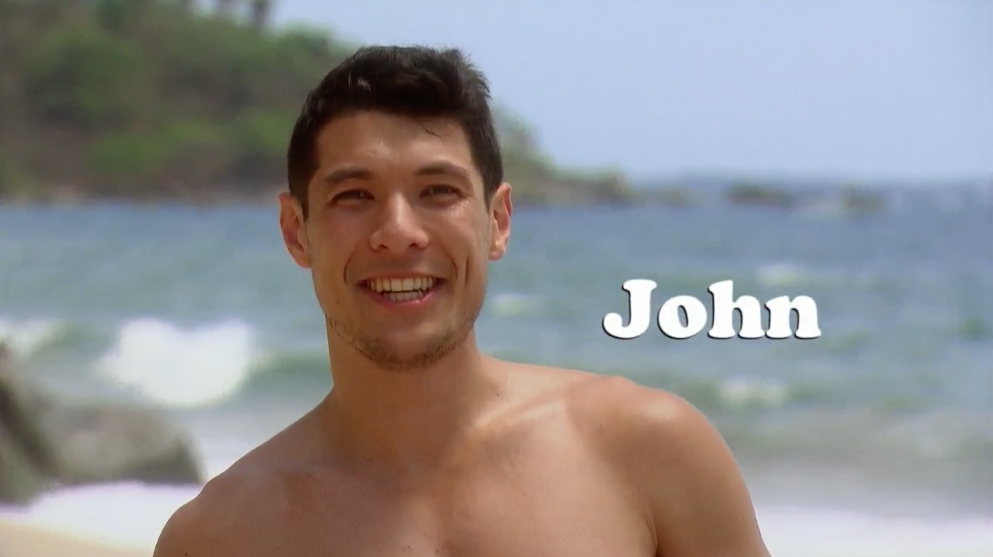 We meet John, the Silicon Valley programmer who helped build the Venmo app, in a clip where he literally sits on the beach and sorts through a pile of cash with a deranged, self-satisfied smirk on his face. This intro is insanely rude, but John is so charming we can’t be mad at him. 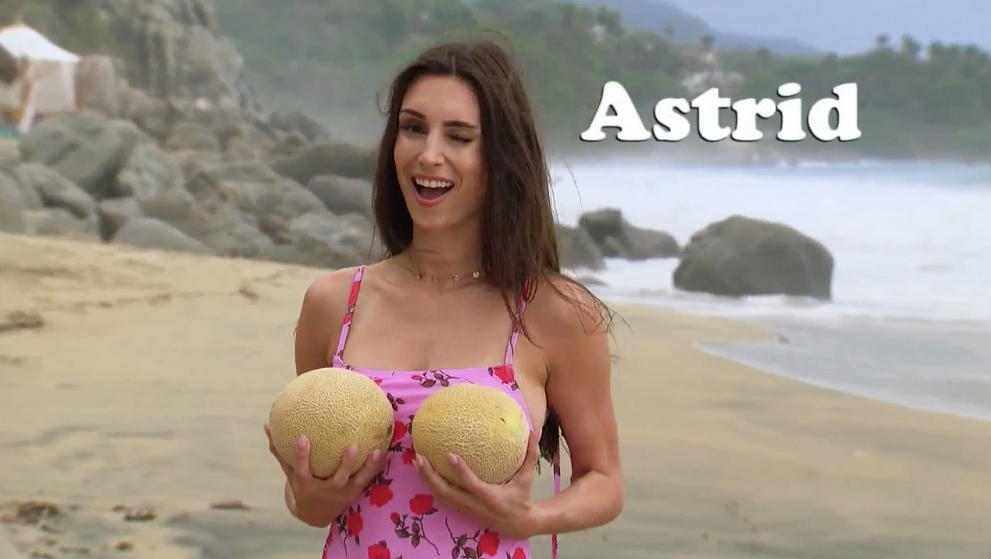 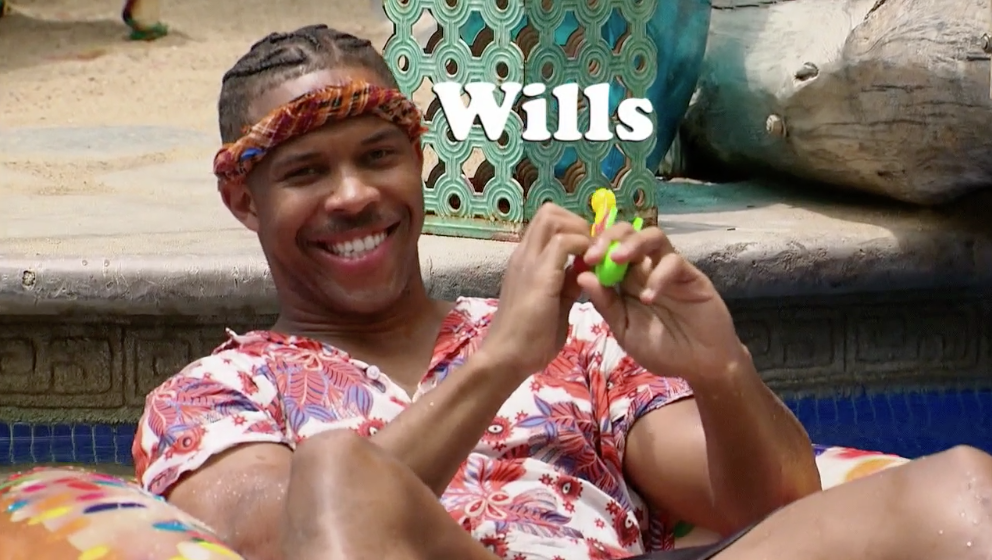 WILLS! Say it ain’t so! Why no one wanted to make out with Wills and his incredible outfits is a mystery we will never understand, but we’ll always have this adorable intro to remind us what could have been. 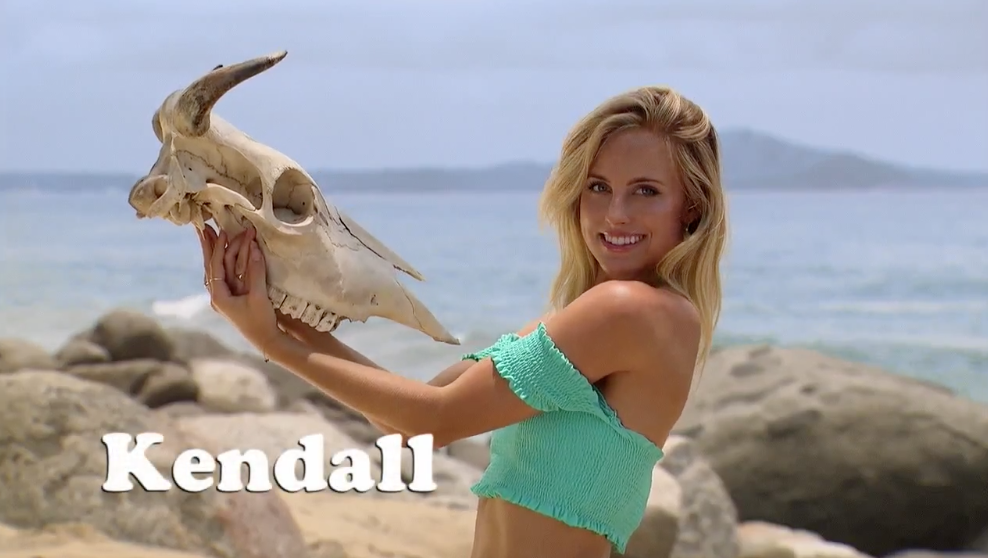 The cinematography on Kendall’s intro is, like, shockingly good. Her top and jewelry play beautifully against the blue ocean backdrop, and the skull she’s holding is giving us Georgia O’Keeffe vibes, which also jibes well with her “edgy,” low-key personality (she once sang a song to a taxidermy seal). 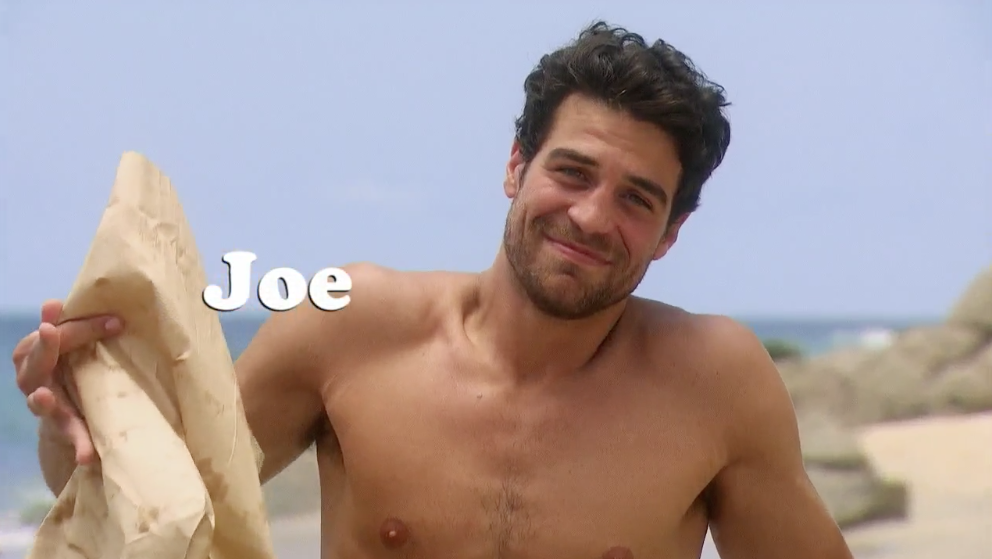 There’s no way Joe wasn’t going to be in the top 5 just based on his looks alone, but his intro also highlights his bashful personality: In it, Joe (a grocery store owner) drops a bag full of produce and shrugs ruefully at the camera as if to say “Who, me?” Yes, you! 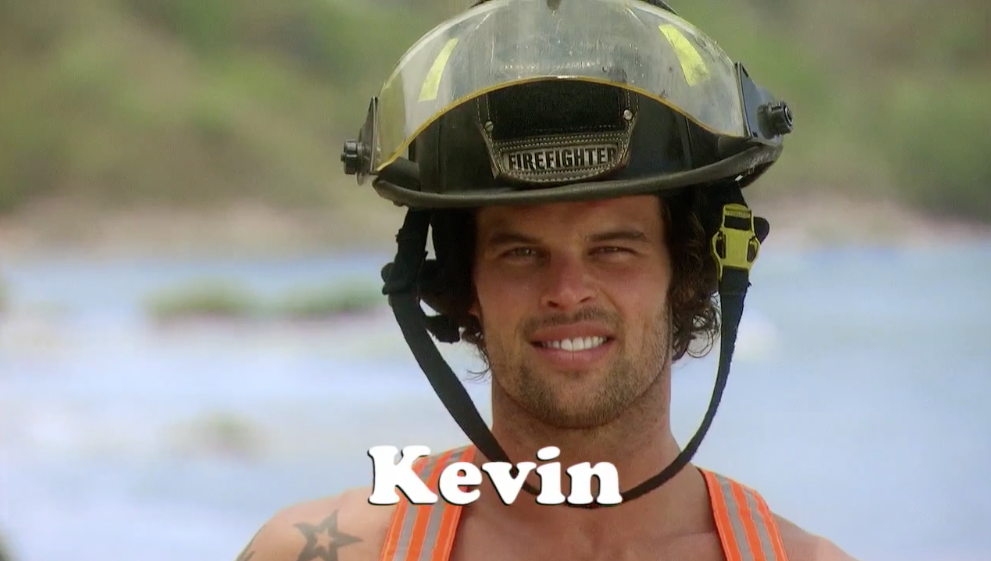 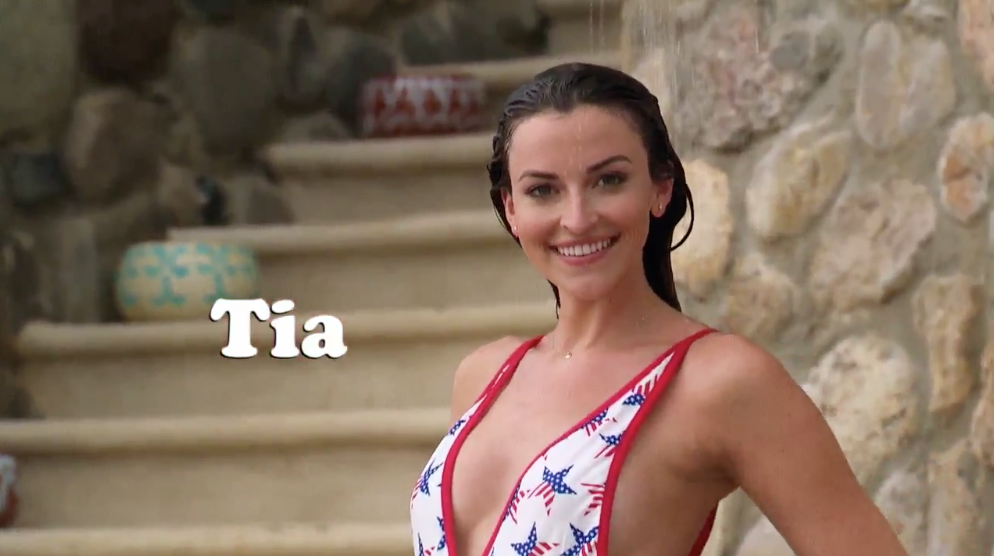 The platonic ideal Bachelor in Paradise intro, Tia’s clip is bizarre, funny and somehow sexy—it sticks in your mind like the hook of a pop song. The camera pans slowly upwards from a pair of cowboy boots (Tia’s from the South!) to a star-spangled bathing suit (huh?), and we realize Tia is taking an outdoor shower when she turns towards us and flashes a big smile. Tia’s taking a shower…while wearing cowboy boots. It’s basically perfect. 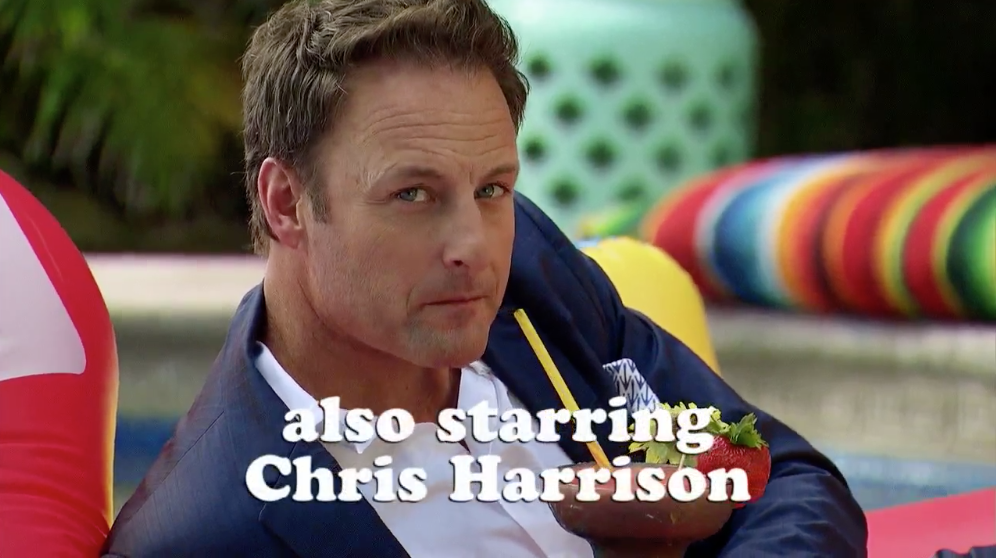 Notice, right off the bat, that Harrison is the only BiP cast member whose last name is featured in the credits—he’s the only person on the show to have earned the privilege of lasting identity. As the legendary franchise host, this entire universe is subject to Harrison’s whims because he is the Bachelor‘s sometimes vengeful, sometimes benevolent god. Just look at the way he stares right into the camera, feigning surprise as he sips a cocktail and lounges by the pool. Harrison’s power is limitless, and he knows it. 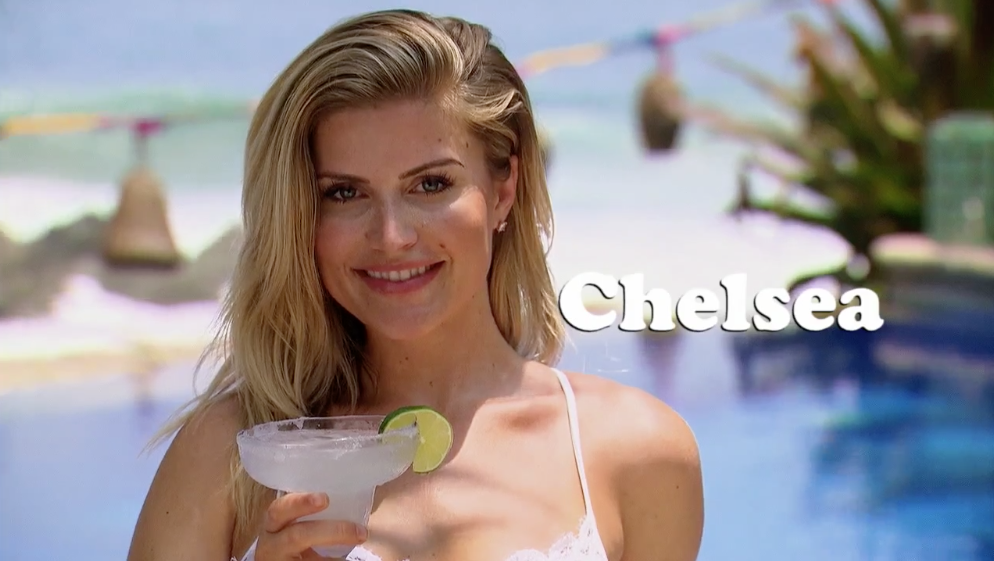 The undisputed Season 5 champion. Chelsea is reserved and may be a bit of a dark horse as a franchise “star,” but that doesn’t stop this intro from being one of the funniest things ever. Her clearly surgically enhanced smile is taut, revealing nothing. The bright white of her bikini plays well off the frozen margarita in her hand. But her eyes!

Never have we seen such a blank expression. This isn’t Wells moping because he has to mix drinks—this is the face of a shark who smells blood in the . Chelsea’s face here resembles Nicole Kidman’s frostiest movie roles. Like Kidman, she appears to be hiding thoughts of murderous rage behind a smooth, unreadable mask. We wish her all the best. 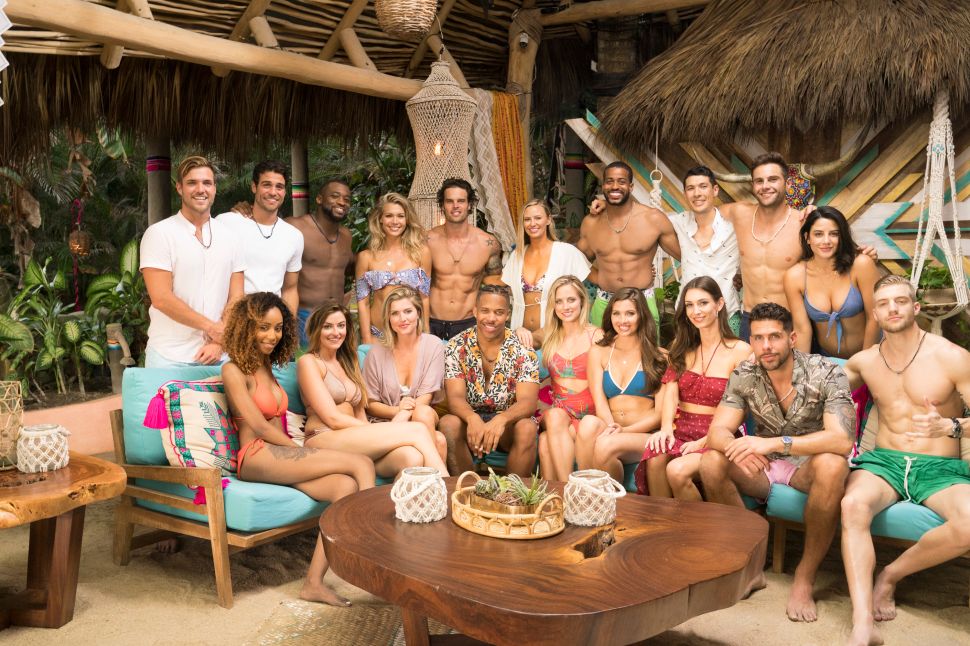