Shortly after we first meet Keda, the protagonist of Ice Age adventure film Alpha, he is being flung slow motion over a cliff, Wile E. Coyote style, by a buffalo.

This makes sense: Keda (Kodi Smit-McPhee) is more sensitive than your typical Cro-Magnon, less kill-ready. A flashback that a title card says took place “one week earlier” (it’s funny to imagine weeks existing 20,000 years ago) sets the scene. “He leads with his heart, not his spear,” his mother observes as the 17-year-old is about to set out for this, his first fateful bison hunt.

Sure enough, after he flips off a cliff (made all the more vertiginous by IMAX 3-D), and lands hard on an outcropping of rock a third of the way down, Tau, his father, sheds copious tears. By comparison, when another boy was taken in the night by what appeared to be saber-toothed tiger, the tribesman barely blinked an eye.

So what is it about this boy?

It’s hard to tell. Alpha never lands emotionally to the same degree that it does as spectacle and grand idea. The relationships meant to give the story its power—between the boy and his parents and, most crucially, between the boy and the wolf he befriends—never quite resonate. The connections between the characters are supposed to be powerful enough to sustain Keda through his perilous journey home during an Ice Age winter, and also lead to perhaps the first known example of the domestication of dogs. But this is a concept that feels forced onto the story.

Still, it is difficult not to be impressed by much of what does arrive on screen. In telling a simple tale of survival and friendship on the grandest scale, Alpha stands out as one of the more creative uses of big screen spectacle this summer. No one flies; no cities, planets or tall buildings blow up; and it has no numerals dangling at the end of its title. The most exciting set piece is when Keda falls though the ice, with the camera far below him, looking up through the clear blue as the wolf attempts to facilitate his rescue.

In short, in the current film-going environment, a PG-13 movie spectacular this untethered from pre-existing corporate properties is something of a miracle, albeit a flawed one that is missing the feral spark that makes the best man and beast stories so powerful.

Part of the issue is that the immense amount of control it takes to mount such an undertaking precludes the moments of wildness required to really make it live. The filmmakers not only recreated the glacial winter in locations that included Vancouver, Alberta, and Iceland, they invented an entire Cro-Magnon language of roughly 1,500 words. Most of these words are in service of aphorisms spoken by Tau, who is constantly imparting bits of wisdom to his son (“Raise your head and your eyes will follow”) that undoubtedly sound better in Cro-Magnon than in English.

Then there is the matter of the lupine costar, played in part by Chuck, a Czech wolf dog from France. Chuck is ready for his close-up and deserves more of them. The too few moments when he is truly being himself—like when, early on in their relationship, Keda throws a stick at him in an attempt to make him shoo and he picks it up and brings its back—are when Alpha is able to brush off the dust and snow of twenty or so millennia and truly come to life. 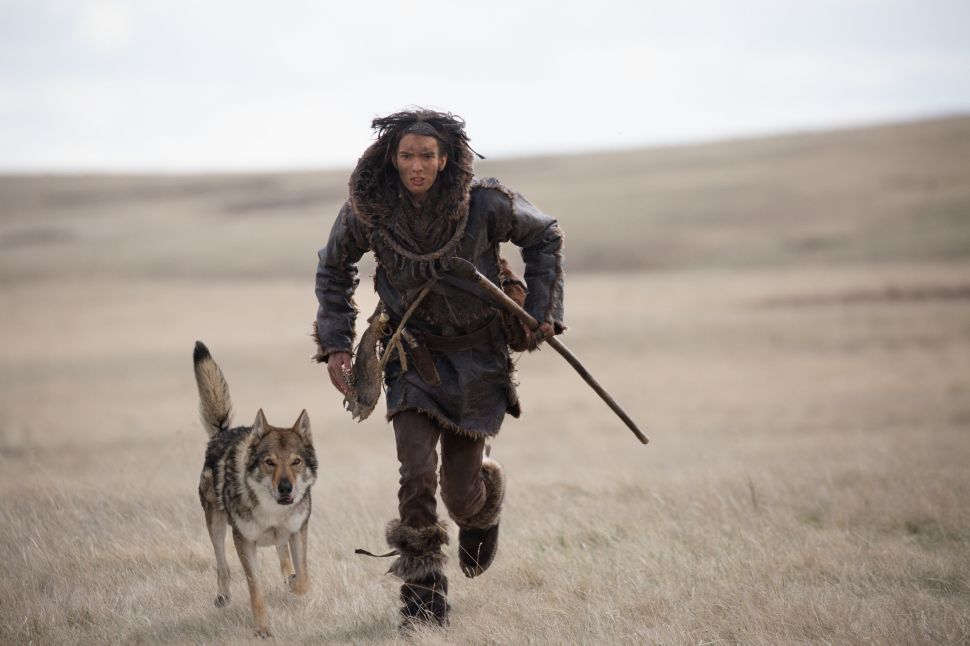