No American should be winning more than Ann Coulter.

The populist candidate she rallied behind in 2016 was elected to the presidency. The White House is pursuing a hawkish immigration platform in line with policies she’s advocated since the Gingrich Revolution. Her last book, In Trump We Trust: E Pluribus Awesome!, like the 11 before it, was a New York Times bestseller.

But like so many others who live and breathe politics, a faint sadness has descended upon Coulterland since President Trump’s election. And the death threats don’t help.

“It really is scary right now,” Coulter told Observer as she chewed her third piece of Nicorette at a French café on the Upper East Side. “Luckily, I am used to it.”

The original plan to meet at Starbucks and “rap with baristas about race in America”—her suggestion, not ours—fell apart after she decided the one on 85th street was too cold. Instead, we found ourselves at Jacques Bistro enjoying Maryland crab cakes on the eve of her latest book release, Resistance is Futile! How the Trump-Hating Left Lost Its Collective Mind, out from Sentinel this week.

“They’re getting crazier and crazier,” said Coulter, citing the incident earlier this month in Sacramento, California, in which the lead singer of Social Distortion was filmed assaulting a Trump supporter. “There are certain places I won’t go, like downtown Manhattan. The fans are ferocious, but the enemies are also ferocious.”

These days, Coulter keeps a tight circle of mostly male friends, which includes a rotating cast of media misfits, retired bodybuilders, a divorce attorney, and the guy who was Kramer’s stunt double on Seinfeld. She has traded in her once-frequent television appearances for writing and watched a once-glittering New York City social life atrophy. She sometimes awakes at noon and spends the rest of her day tweeting and watching cable news. But she feels nostalgic for parties with the titans of the mainstream media.

“One of the things I miss the most now in the Trump era is that I used to have lots of liberal friends,” lamented Coulter as an Upper East Sider glared our way. “We’d have big dinner parties and we’d debate and it was fun and we’d go out. I still have some liberal friends I can talk to, but a lot of them I can’t… I miss some of my friends.”

Rather than plug her book with Bill Maher on premium cable—her last appearance on Real Time was almost two years ago— Coulter is scheduled to tour Australia with the diminished right-wing provocateur Milo Yiannopoulos, who lost funding from the powerful Mercer family after a Buzzfeed feature linked him to white supremacists.

“It was a bullshit story,” said Coulter of the Buzzfeed piece. “Who cares? I didn’t do that.”

In Australia, Coulter will arrive to receptive audiences: In recent months, the continent has become a hotbed for the same nationalist frenzy that swept the United States and Europe. Canadian far-right activists Stefan Molyneux and Lauren Southern recently toured the country, and were reportedly charged AU $67,000 after riots broke out at one of their speeches in Melbourne.

Coulter’s own brand of nationalism, once considered mainstream within the Republican Party as she advocated for the Iraq War alongside leading neoconservatives, has veered toward the fringes in the Trump era. Following Syrian President Bashar al-Assad’s use of chemical weapons against his own people this spring, Coulter retweeted a white nationalist leader alleging the attack was “fake.” In June, she labeled migrant children “child actors” amid fallout from the White House’s controversial immigration hardline, echoing conspiracy theorist Alex Jones’ spurious claims that Sandy Hook shooting survivors were “crisis actors.”

Despite courting white nationalists on Twitter, Coulter told Observer that the movement’s leader Richard Spencer is either “a federal agent” or “an agent force for the Southern Poverty Law Center.”

Which isn’t to say she doesn’t identify with Spencer, at least on one level. “An Ann Coulter speech is a form of violence,” joked Coulter, mocking those on the left who would curb her first amendment rights. “Because supporting the man who won more primary votes than any Republican in history is apparently evidence of a KKker.”

But as fervently as she defends even the most offensive of speech, for Coulter, organizations like the Westboro Baptist Church, whose members protest outside soldiers’ funerals, are a bridge too far. “I was totally on the other side of that,” she explained. “It’s intentional infliction of emotional distress. If they want to go up to Charlottesville or a town square, okay, but they’re doing it to cause parents and family members pain. There are limits to the First Amendment, reasonable limits.”

Perhaps it was the Nicorette, but for a brief second, Coulter seemed willing to admit that she was wrong about supporting the invasion of Iraq—it turns out she was just blaming Obama. “Now I’d say I wouldn’t go in, not because there weren’t weapons of mass destruction, but because I didn’t realize I lived in a country that would elect a man who would steal defeat from the jaws of victory.”

“I don’t think you need to stick to something,” she conceded. “I think especially in politics people get obsessed with consistency. Nobody votes on consistency.”

As the waiter removed her bowl of French onion soup, Coulter noted how Observer did not ask too many questions about Resistance Is Future! Observer demurred. Leaving the restaurant, she bent over to pet a stranger’s dog, laughing and smiling before reentering a labyrinth of angry pedestrians and alarmed double-takes. 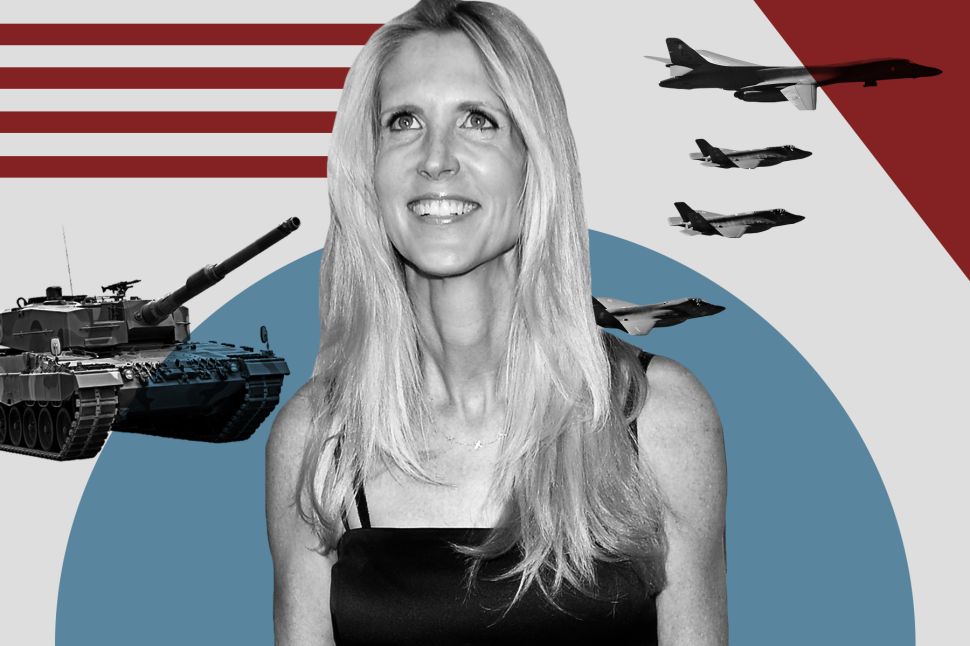