Colton, Tia, Becca, Chris, Krystal, sure, right, whatever. It’s a mess, and it’s all going down on Bachelor in Paradise. But a conversation between San Francisco programmer John Graham and newcomer Jubilee Sharpe was easily the most interesting thing that’s happened in this season so far.

Venmo John and Jubilee, who punctuates her Paradise entrance by saying “I just got out of the military and you know what they say, there’s no love without war,” immediately bond over their similar career paths (Jubilee’s military role was in communications).

Then, John asks Jubilee about her experience on Ben Higgins’ season of The Bachelor. “I had a really rough time,” Jubilee says. “I think it was just because I was, like, very different from all the other girls.” John immediately catches her drift; Jubilee is alluding to the fact that as black woman who’s part of The Bachelor franchise, she’s very much in the minority.

“I had that same thing too,” John says. “I’m half Chinese half white, and I came in kind of intimidated, because looking at the guys I’m like, ‘I’m not this archetype of the homecoming king, something doesn’t compute.’” Jubilee bursts out laughing. “But not everyone wants that! I don’t want that,” she says, still smiling.

This is about as close as the Bachelor universe gets to internally critiquing the overwhelming whiteness of its cast, which the show has been derided for for years. In 2012, the franchise was even slapped with a class action lawsuit alleging systemic racial discrimination, although the suit was later dismissed.

Nonetheless, it’s still refreshing to hear two people speak frankly about the discomfort they feel as non-white people on a primetime broadcast television show with a long history of failing to represent minorities.

The Bachelor’s attempts to reckon with race and representation have always felt insincere. In 2017, ABC finally introduced the first black bachelorette in franchise history, but Rachel Lindsay’s season was ultimately a disappointment to many.

“[Lindsay] was recognizable to white women who related to her class experience and to black women who recognized her cultural cues,” Robin M. Boylorn, an associate professor at the University of Alabama, wrote in Slate. “She seemed like the ideal female viewer surrogate on a show that otherwise erased race, with few consequences—a protagonist who could allow the show to satisfyingly portray black love without alienating white viewers.”

Before Lindsay, a lawyer from Dallas, assumed the role of bachelorette, every season of both the Bachelor and the Bachelorette since 2002 had never featured more than a handful of minority cast members, and before Rachel, throughout the franchise’s history no black contestant had never made it past the fifth week of eliminations.

There has never been a black bachelor, although ABC touted Venezuelan-American Juan Pablo Galavis as the first “non-Caucasian” bachelor, which should give you an idea of just how low the bar is when it comes to representation of minorities in popular media.

Competing on a Bachelor series is also a lot more complicated for non-white contestants. When Jubilee vied for Ben Higgins’ hand in marriage, she received unwanted attention from cast members who accused her of not being “grateful” enough for the opportunity to be on the show. Higgins, who is white, often found himself defending Jubilee during his season, because she frequently and unfairly was the target of derision from other women.

It makes sense, then, that Jubilee would come to Paradise unwilling to pull punches and with a clear objective in mind. This woman has dealt with enough petty and exclusionary bullshit to last a lifetime, much of it as a direct result of appearing on a juggernaut show which is still not doing nearly enough in the name of diversity.

Jubilee asks John out while he still has his arms wrapped around Caroline, the sexy brunette with whom he’d just had a romantic dinner. That’s such a cool move! Jubilee is awesome.

The date is a success: John and Jubilee go zip lining through a lush forest, and while flirting over margaritas they discover that they’re both dorks who play string instruments. They kiss, it’s cute, and I certainly ship it—it’ll be interesting to see how their relationship develops over the next couple of weeks. 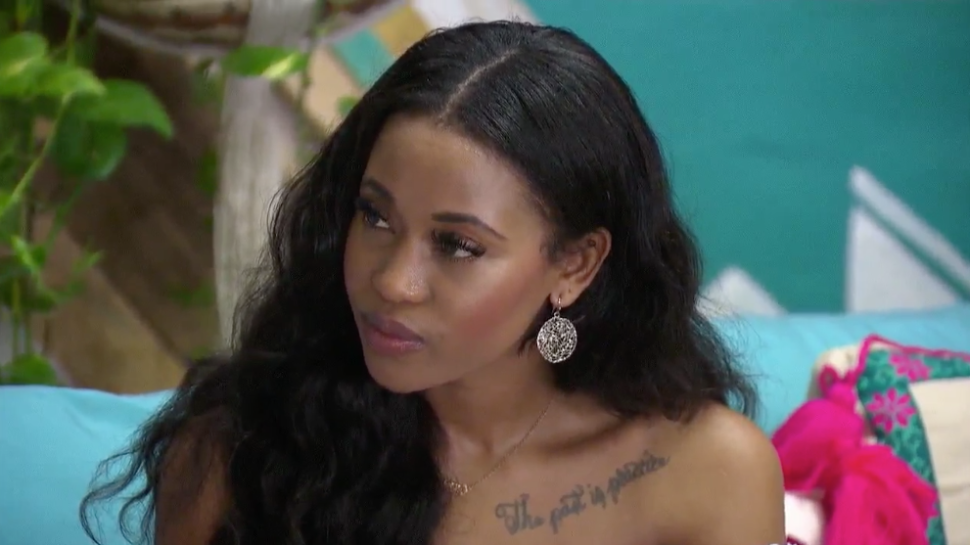