Spike Lee has painstakingly and unapologeticially forged his own Hollywood path since his persuasive debut, the boundary-pushing 1986 rom-com She’s Gotta Have It. From there, his mind as a storyteller both grew and expanded, a rare accomplishment in an industry that seems to view the two attributes as mutually exclusive. A director’s scope often grows over time as bigger projects enter the pipeline, but Lee managed to expand his worldview and sensibilities to match the heightening ambition.

Which is what makes his recent cold streak so interesting. Lee has never been everyone’s cup of tea, but the last 12 years have stood in stark contrast to his meteoric rise. Unfortunately, his recent output in his preferred medium has left audiences unfulfilled. Did the times catch up with the unshirking filmmaker as social consciousness leapt forward? Did his tics as a director grow tiresome? As Hollywood began to embrace black creators, both on the margins and the middle, had Lee quietly become the old guard?

In many ways, Lee threw Hollywood into the deep end as a sink-or-swim challenge in the fight for diverse representation and equal opportunity. Early on, he was one of the few big name mainstream black filmmakers earning prestige and audience appeal. Here was a guy telling stories that the Hollywood machine rarely allowed to make it onto the big screen, and he was doing it in inventive new ways, aesthetically and thematically appealing to both younger audiences and older demographics.

As a storyteller, Lee is best known for his trenchant focus on race relations, urban life, the role of media in today’s society and underlying political issues that divide us. His work is dotted with unique visual and audible languages that have become running motifs in his filmography; dolly shots that convey a sense of floating through one’s surroundings and blaring musical horns from a firm brass section. He’s applied these leanings throughout his career, a 40-year journey that has spanned feature films, documentaries, television, shorts and music videos. But Lee is first and foremost a filmmaker—a big screen storyteller with a socio-political slant aimed at opening our eyes to unseen or ignored struggles.

Yet the broad idea that Lee wasn’t quite as sharp as he used to be seemed to be accepted by the masses over the last decade. Fortunately, BlacKkKlansman is here to shutter that narrative.

There’s a clear progression to Lee’s filmography that illuminates his place in cinema.

His third feature, the magnum opus Do the Right Thing (1989), builds the day-in-the-life structure to a violent crescendo with a deadly race riot in Brooklyn. His fifth film, Jungle Fever (1991), is an unflinching cautionary tale involving an interracial relationship. His sixth picture, Malcolm X (1992), began life as a directorial vehicle for the Oscar-nominated director Norman Jewison before public outcry, spearheaded by Lee, called for a black director to take on the story. He Got Game (1998), 25th Hour (2002)—the first 20 years of Lee’s career were a swarm of stylish deliveries with an undercurrent of rage aimed at society’s institutions. They felt important.

But it’s not a stretch to say that Lee’s last bona fide success was 2006’s Inside Man, the Denzel Washington-led crime thriller about the perfect bank robbery. It has all the trappings of a Spike Lee Joint—the jazz instrumentals and roving camera complimenting and capturing an intricately pieced together mystery delivered slickly. There’s the underlying political jockeying of cogs in a corrupt system and how morality, or at least a sense of honor, holds no place in a modern world. Critics and audiences agreed as Inside Man holds an 86 percent on Rotten Tomatoes and stands as Lee’s top-grossing movie.

After that, it’s been a downhill ride.

2008’s Miracle at St. Anna had the building blocks of Lee’s socially awakened sensibilities but was far too convoluted to deliver the punch he was looking for. It is at once a war story, a love story and a historical race story. Audiences want to get invested in each, but the jarring shifts between them stunt any momentum. 2013’s Oldboy had the unenviable task of remaking the beloved 2003 South Korean classic of the same name. The American version drew warranted criticism for its uneven adaptation that failed to build on the original. It also underwent heavy changes in the editing bay from producers, with Lee distancing himself from the final product. That was a good move as it grossed just $5.2 million worldwide against a $30 million budget, becoming the director’s most egregious financial flop. 2015’s Chi-Raq is uneven yet sharp, but as a modern day adaptation of the ancient Greek play Lysistrata by Aristophanes, it was hardly the mainstream success that could reverse his recent downward career trend.

A narrative was beginning to take shape that Lee, like his beloved New York Knicks teams of the 1990s, had lost a step. But all that was really needed was some patience and faith on our part.

BlacKkKlansman sprinkles some of Lee’s early magic with a renewed sense of history. It tells the incredible true story of Ron Stallworth (John David Washington, son of Denzel Washington), the first African-American detective in the Colorado Springs Police Department. In the 1970s, he infiltrated the Ku Klux Klan and recruited veteran colleague Flip Zimmerman (Adam Driver) in one of the most daring and outrageous undercover operations in history.

Produced by Jordan Peele, BlacKkKlansman is extremely powerful—hilarious at times, heartbreaking at others. It reminds you of the power of hateful rhetoric and uncomfortably parallels the racism of the past to today. It is a deeply serious story told in a highly entertaining way and easily Lee’s best film in years.

It makes you feel ashamed of our history yet uplifted by Ron’s triumph. Most films about race treat the sensitive subject as if it were a bowl of hot soup, delicately balancing it for fear of getting burned. Lee’s approach cooks up the material like a stuffed omelette, tossing in delectable ingredients that don’t seem to go together until the flavor hits your tongue. BlacKkKlansman swings from soul-crushing awfulness to ghoulish giggles without warning, sometimes within the same scene, creating dark humor with a clear perspective.

This move explores racism in a way few stories can.

Civilized people like to think that conversations and education and shared experience can slowly melt away this kind of hatred. More militant minded people believe that anyone who doesn’t think like you should be erased from existence. Neither approach has worked for society throughout the course of human history, so what is left to do? No, I’m really asking, what else can we do? Because BlacKkKlansman makes you wonder if there will ever be a solution to hate.

And if we can’t fix the problem, than aren’t we just left with a never-ending war, fought between the government and the people, between certain police officers and young black men, between employers and prospective employees of color, between neighbors? A fight that spills into the undercurrent of every facet of every day life until, one day, we’re out fighting for real? In Charlottesville? In Baltimore? In America?

Like I said, Lee’s work feels important—and that’s because it is.

BlacKkKlansman marks a return to form on the big screen for the director (his Netflix adaptation of She’s Gotta Have It proved he didn’t really go anywhere) and an update of stylings and approach. It still very much feels like a Spike Lee film, but it also very much feels of the time, despite its ’70s setting. There are clear Trumpian parallels that deliver the story with a blunter impact. It isn’t so much a movie as it is a gut-busting riot of gut-punching truth.

Ladies and gentlemen, Spike Lee is back. 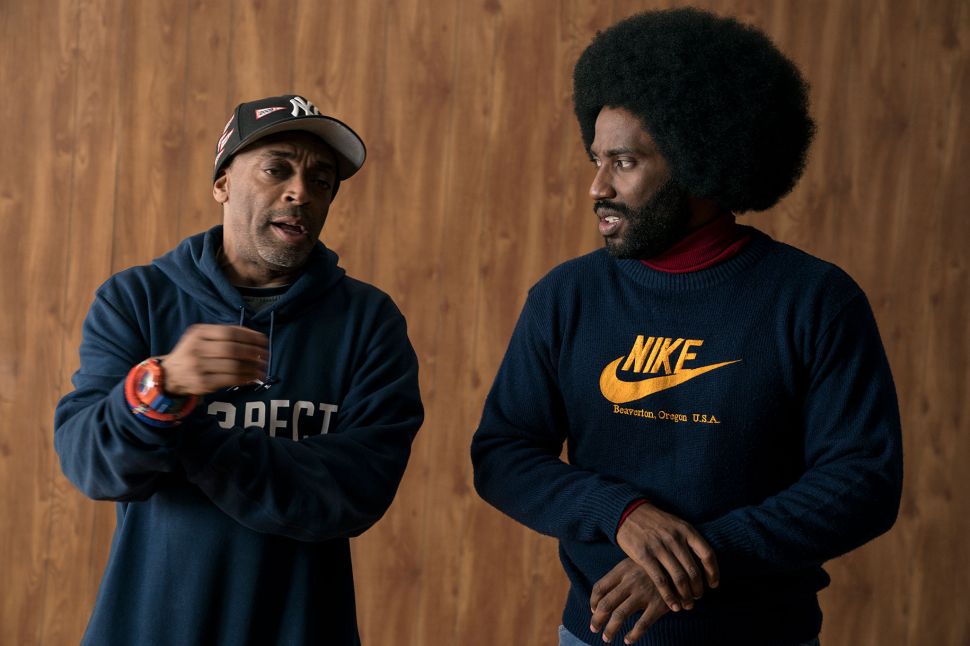