Blue diamonds are a geologist’s best friend. At least according to a new study published today in the journal Nature.

Diamonds—one of the most sought after gemstones in the world—have started wars and symbolized love affairs, but they are more than ornate adornments, diamonds are also a great scientific tool, providing a shimmering snapshot into the Earth’s inner workings.

It all boils down to the elemental wizard behind the curtain: carbon. That’s right, the same ingredient found in pencil lead is responsible for the sparkly existence of these highly coveted stones; only the atoms are arranged differently. But it takes an immense amount of pressure to do the necessary atomic rearranging. The kind of pressure you can only find deep below the Earth surface.

Like the Earth, diamonds are actually billions of years old. Taking millions of years to form, this crystalline form of pure carbon is a bit finicky, requiring a specific set of conditions, which can be only found deep below the surface in the upper mantle. But how do the stones get to the surface? (Mining efforts do not go anywhere near that deep.)

Kimberlites are like the Uber of diamond transportation services. This type of magmatic rock—also formed deep in Earth’s interior—is sent racing to the surface during volcanic eruptions. After they form, diamonds travel up special lava tubes where they’re mixed with the kimberlite, before hitching a ride to the surface. Along the way, that perfect crystalline structure can become tainted giving rise to beautifully imperfect colored diamonds.

But how do blue diamonds get their color? Wayward boron.

In their purest form, diamonds develop as perfect colorless stones. Jewelers typically say the more colorless a stone is, the more valuable it tends to be. But that’s not always the case. Diamonds actually come in an array of colors, which are caused by impurities or defects in the stone’s structure. Blue diamonds are some of the rarest of the rare. In fact, one out of nearly 200,000 diamonds found in the world has any sort of blue tinge to it, and typically it’s a shade of pale blue. The deeper the blue, the more rare the stone is.

This is why audiences were enthralled at the gorgeous cobalt stone that dangled from Kate Winslet’s neck during James Cameron’s Titanic. It was inspired by one of the world’s most famous jewels, the Hope Diamond, which has a storied past, bouncing between monarchs and thieves before taking up residence at Washington’s National Museum of Natural History.

According to research published on Wednesday, the geological history of blue diamonds is even more complex. Scientists already knew the blue hue came from the element boron, which is typically not found in the upper mantle.

“Because boron is a quintessential crustal element with a low concentration in Earth’s mantle,” the researchers explained in Nature, “blue diamonds and their formation have long been a geochemical enigma.”

According to the new report, researchers were surprised to find that these gemstones form 410 miles below the Earth’s surface—four times deeper in the Earth than their colorless counterparts which are found at much shallower depths (between 90 to 125 miles underground).

So, the million-dollar question is how did the necessary boron get to the depths needed to form diamonds? The answer: recycling.

Material on the Earth is continuously recycled through plate tectonics and subduction, in which crustal material from one plate shifts underneath another one. Gauging the extent of this recycling is incredibly difficult; however, the existence of blue diamonds confirms that boron (a crustal element) is somehow being pushed to greater depths.

As if placed on a continental conveyor belt, the oceanic crust is pushed deep underground during tectonic collisions, to the mantle below. This provides a perfect pathway for boron and other minerals to be incorporated into diamonds growing deep inside the Earth.

To better understand their origin story, scientists analyzed 46 blue diamonds, including one from South Africa that sold for $25 million in 2016, and determined that they can form at depths of at least 410 miles. Reaching into a part of the Earth’s interior called the lower mantle, the researchers also found tiny mineral fragments trapped inside the diamonds that provided clues needed to help pinpoint their origins.

According to Evan Smith, lead author on the paper and research scientist at the Gemological Institute of America, this study is the first to produce a detailed model showing how and where blue diamonds form, and where they get their boron supply.

Virtually all diamonds have birthmarks. Just like the iconic scene in Jurassic Park shows a perfectly preserved mosquito in amber, carbon crystals trap other minerals that form imperfections in the stone called inclusions. To gem cutters they are flaws to be removed; to geologists, these tiny messages from the depths of our planet tell a bigger story. Within the inclusions, researchers identified the remnants of minerals (including calcium silicates) that only form at extremely high pressures. As the diamonds travel toward the surface, those minerals become unstable and change, leaving behind shattered pieces of mineral fragments.

The researchers analyzed the resulting patterns left behind, combining the data with the list of minerals found in the inclusions and came to the ultimate conclusion: The Earth is the ultimate recycler, continuously pulling material into its rocky depths to be used and shot to the surface again. 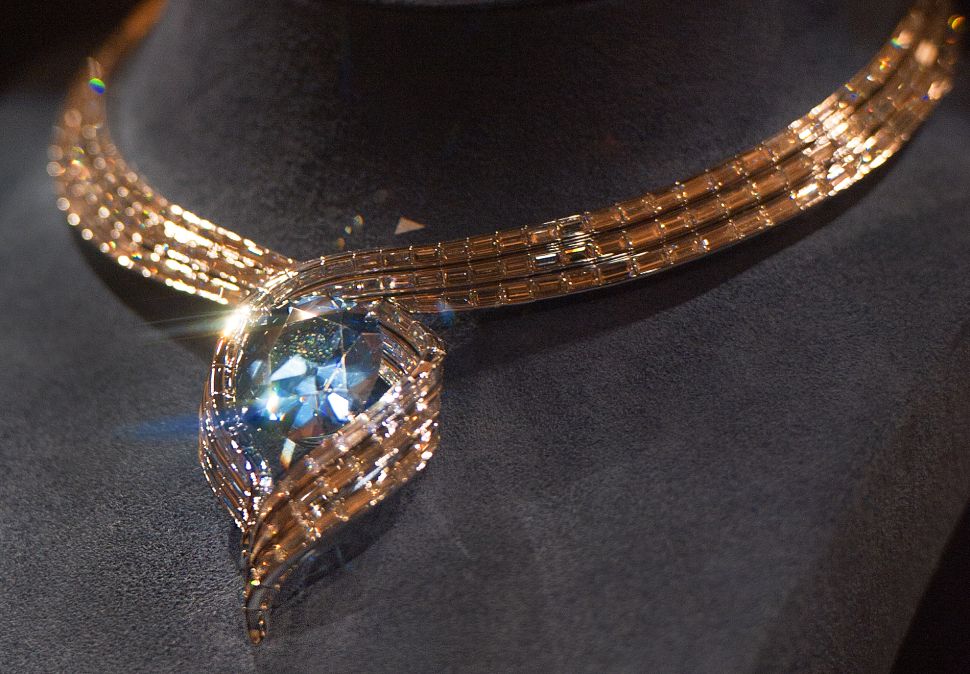