It’s been more than 50 years since Disney released the first featurette based on the characters created by A.A. Milne, and seven since they last appeared in theaters in the slim, enchanting and largely overlooked Winnie the Pooh. Over the years, the Hundred Acre Wood gang has appeared in five TV series, nine direct-to-video movies, and 19 video games—and we’re just scratching the surface.

While I have not seen the entire opus (though anyone who has ever lived with a toddler will feel like they have) it is safe to say that there has never been a more morose or less lively a rendering than Christopher Robin. A better title for this entry, the first of the Disney Poohs to be live action (although neither word in that phrase is an apt descriptor), would be Winnie the Pooh and the Unfilled Zoloft Prescription.

Cut from the same conceptual cloth as 1991’s epic Steven Spielberg misfire Hook and filtered through the kind of period piece signifiers rampant in American Girl Doll movies, the film is meant to tell the story of the titular character’s midlife crisis. The ennui suffered by Christopher (Ewan McGregor)—an efficiency manager at a luggage company (huh?) who ignores his wife and daughter in favor of his work—permeates every frame of the film and infects the other characters as well.

Pooh (voiced by Jim Cummings, who also plays Tigger) seems the most susceptible. Indeed, where his past scrapes typically involved getting his head stuck in a honey pot, in this film, his troubles seem far more existential.

At one point we encounter Pooh stumbling around a misty Hundred Acre Wood wondering where his friends are and saying aloud to no one in particular, “I have reached the end of my thoughts.” You half expect him to wander into Tony Soprano’s backyard and start feeding the ducks in the pool. It says everything you need to know about the mood of these proceedings that, when Christopher discovers the donkey Eeyore (voiced by Brad Garrett), the Hundred Acre Wood’s resident pope of mope floating down a stream towards certain doom, things actually liven up.

The film never figures out its internal logic, like why the tree that was always connected to a country cottage in Sussex suddenly allows the gang to be transported to downtown London, or for that matter, what animates the stuffed animals in the first place. In the past, it always seemed to be the power of friendship and imagination, but both are in short supply here.

When Pooh first approaches his old friend, Christopher treats the intrusion like an unwanted Facebook friend request. They spend much of their time back on their old stomping ground sniping at each other like reality show contestants. (At one point, Christopher berates Pooh for not knowing how to properly use a compass.)

As for originality, the denouement features the same type of chaotic chase scene you see near the end of 90 percent of modern kids’ movies. I cringed when Piglet slammed into a car window, which to my mind would be one of the greatest fears of a character I have known all of my life. The film relies on this kind of destructive humor (when Pooh enters the Robins’ kitchen, he accidentally smashes all their china) and it runs directly counter to the spirit of these characters, whether you are a devotee of the Milne or past Disney versions.

McGregor endures this all in the same “good soldier” mode we recognize from the Star Wars prequels. (The voice performances are more fun, including Cummings, who has been voicing Pooh since the late ’90s.) McGregor can’t seem to find the center of a character that is more concept than person. Try as he might, the actor is never able to muster enough of his trademark sense of wonder to lift up what amounts to a profoundly joyless exercise in brand extension. 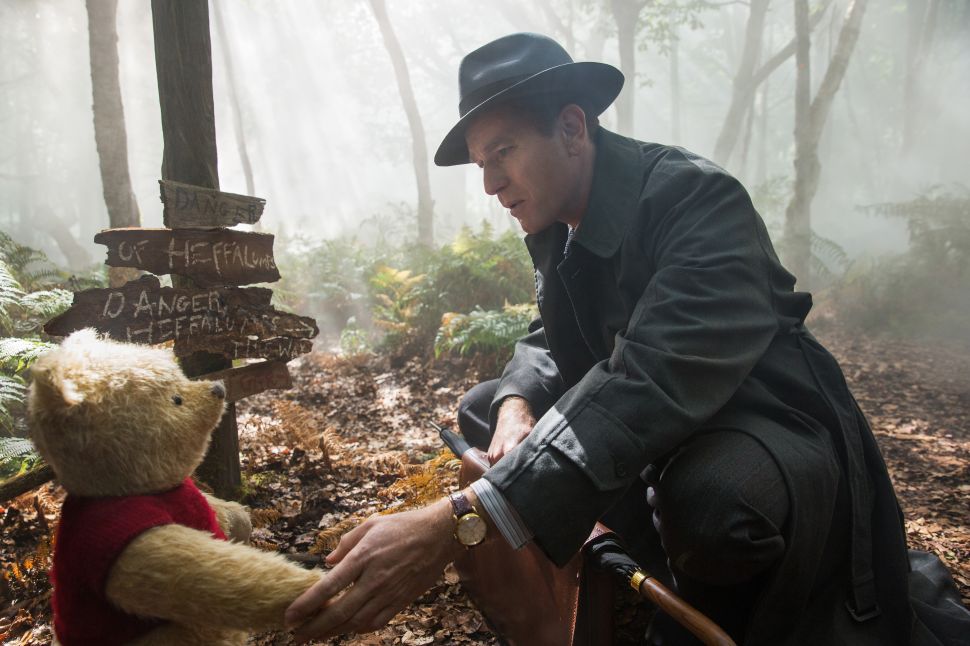