Peter Quill was a scumbag.

He was a smuggler, a thief, a cocky momma’s boy—with no respect for authority.

And then he changed. In hindsight, his transformation seemed inevitable; Quill had a good heart, despite his problems. So when a theft gone wrong set him on a course to redemption, Quill gathered up a ragtag group of misfits and criminals who each needed saving too, and became a better man.

And we, the moviegoing public, spent $773 million to watch him do it, in Guardians of the Galaxy.

This week, Peter Quill’s redemption story took on new significance. The cast of the Guardians of the Galaxy franchise wrote an open letter to Disney, asking for their writer and director James Gunn to be un-fired from movie #3. The Disney bosses had removed him after opponents of Gunn’s personal political views unearthed some awful jokes he told on Twitter nearly a decade ago—and applied abundant pressure.

Buried in both the space saga Gunn wrote and the terrestrial drama that’s unfolding around his job is an irony about today’s culture. But I think there’s a lesson in it that can help us get better together in our polarized society—if we choose to take it to heart.

The plot of almost every Marvel story roughly follows the same pattern as Guardians. One or more protagonists obtain a special weapon or ability, head into the unknown, fight off bad guys, and return home having changed.

This is the Hero’s Journey, the story arc that the influential literature professor Joseph Campbell taught in the 1940s and ’50s to describe the quintessential human story. It describes the plots of every adventure from The Odyssey to The Hunger Games. And it resonates with us so thoroughly because it’s also the basic plot of our own lives. Our journeys inevitably require us to leave home, battle demons, and, hopefully, return transformed and ready to mentor the next generation.

As with any story, we generally celebrate the happy ending of the Hero’s Journey—the transformation where the Hero becomes More. But there’s a necessary part of the transformation that we tend to focus on less than the rest: At some point in the journey, the Hero has to visit a dark place called The Abyss.

To truly transform, the Hero needs to go through some shit.

Often this is shit of the Hero’s own making. Thor loses his temper and gets stripped of his powers. Skywalker exiles himself on an island after failing his student, Ben. Captain America grows that awful beard. But in each of these stories, the Hero climbs out of the Abyss.

We love that person who’s been to the dark side and back—because in many ways we know that’s going to be our journey as well.

Before he became Iron Man, Marvel’s moneymaker Robert Downey Jr. swam through The Abyss of a raging drug addiction. Before he became responsible for half of the books of The New Testament, Paul the Christian apostle was Saul the Christian persecutor. Before he became a devoted family man and a star journalist, my own dear friend and mentor David Carr was a crack addict and an absentee dad. Before I became an advocate for gender equality and started writing books on the power of our differences, I was a casually sexist college student in Idaho.

Disney, of course, knew who they were getting when they hired Gunn for the Guardians movies. This was the guy who wrote the screenplay for the remake of Dawn of The Dead, a movie which among other things featured a woman giving birth to a zombie baby. He launched his filmmaking career with Troma, an indie production company whose express aim was to make people uncomfortable through disgusting, insane exploitation films. In interviews, Gunn has spoken about how he spent his early 20s “screwed up,” dropping out of school and escaping into dark comedy and horror stories.

With that backstory in mind, Gunn’s response to the backlash over the ten-year-old tweets in question checks out: “Many people who have followed my career know when I started, I viewed myself as a provocateur, making movies and telling jokes that were outrageous and taboo.”

He apologized for the jokes over the years. “I’ve developed as a person, so has my work and my humor,” he recently reiterated, saying he “truly felt sorry and meant every word of my apologies.”

To be clear, the old tweets Gunn apologized for are much more skin-crawling—and disturbingly contextless—than the grimy stuff in his early movies. He was obviously deep in some sort of Abyss when he wrote, “The best thing about being raped is when you’re done being raped and it’s like ‘whew this feels great, not being raped!’”

These kinds of jokes are beyond offensive—especially to anyone who has been a victim of sexual assault, or who’s supported someone who has. There’s no getting around that.

But Gunn claims he’s changed. And the Guardians of the Galaxy cast insist that the Gunn of 2018 is a different man from the Gunn of 2008:

“We are not here to defend his jokes of many years ago but rather to share our experience having spent many years together on set making Guardians of the Galaxy 1 and 2,” they wrote in their open letter this week. “The character he has shown in the wake of his firing is consistent with the man he was every day on set, and his apology, now and from years ago when first addressing these remarks, we believe is from the heart, a heart we all know, trust, and love. In casting each of us to help him tell the story of misfits who find redemption, he changed our lives forever. We believe the theme of redemption has never been more relevant than now.”

In blockbuster films, the Hero’s Journey tends to have a big, grand arc back up from The Abyss. But in real life, it’s often less extreme—and certainly less visible to the rest of the world. We’re in a bad place, we realize it, we work at getting better bit by bit—and eventually we’re just…better people.

The Hero’s Journey of our own lives is still the same journey. It’s just harder to see.

The cast of Guardians of the Galaxy believe their director has come up from the Abyss. They’re certainly in a better position to see it than we are. So if they are being sincere, then as a society that celebrates those who go into the Abyss and come back, we ought to ask ourselves: Do we really believe a person who says or does awful things in the past can change?

If the sales figures for films about flawed people who change are any indication, society has voted “Yes” to the tune of hundreds of billions of dollars:

You might not guess we’d voted “yes” based on the way we behave publicly toward people who’ve make mistakes—especially toward those with different political viewpoints than ours. The weaponized state of social media has rendered more and more people irredeemable for mistakes, big and small.

The James Gunn of the late ‘00s fixated on a lot of dark stuff—in his interviews, in his tweets, and in his films. (When he posted the foulest of his Twitter jokes, Gunn was going through a divorce and working on the dark and disturbing movie Super, about a man whose wife had left him, and which included a scene of The Office’s Rainn Wilson being essentially raped by Ellen Paige.) But as Gunn shifted from making dark and disturbing films to working on Marvel franchises like Guardians, Dr. Strange, and The Avengers, the way he talked about his work and life has appeared to shift as well—from an outsider’s point of view, at least. Frankly, it’s more uplifting and less dark.

“I set out to make people feel like those movies made me feel when I was a kid,” he said in a 2014 interview about Guardians of the Galaxy, “that would tune into that magical wonder of the universe that we all feel is there but usually don’t experience—that will make us love the person sitting in the seat next to us more when we walk out of the theater more than when we walked into it.”

I have no personal affection for James Gunn. I hope he proves that he’s no longer the sick joker he was in 2008—but if he proves otherwise, I won’t lose sleep. The truth, however, is if we were all judged so harshly for the worst words that ever came out of our mouths, few of us would have jobs today. Even Peter denied Jesus a few times.

So why don’t we use Guardians of the Galaxy as an excuse to return to a culture of giving our fellow humans a chance to show what they’re really made of? And even if we decide that losing one’s job should indeed be the price of telling foul jokes in years past—perhaps this is the Atonement stage of Gunn’s own Journey—we owe it to ourselves and our culture to give people the chance to show that who they are today can be different than yesterday.

Change doesn’t happen overnight. But if we no longer think people can change, then why do we keep making movies about heroes who do just that? 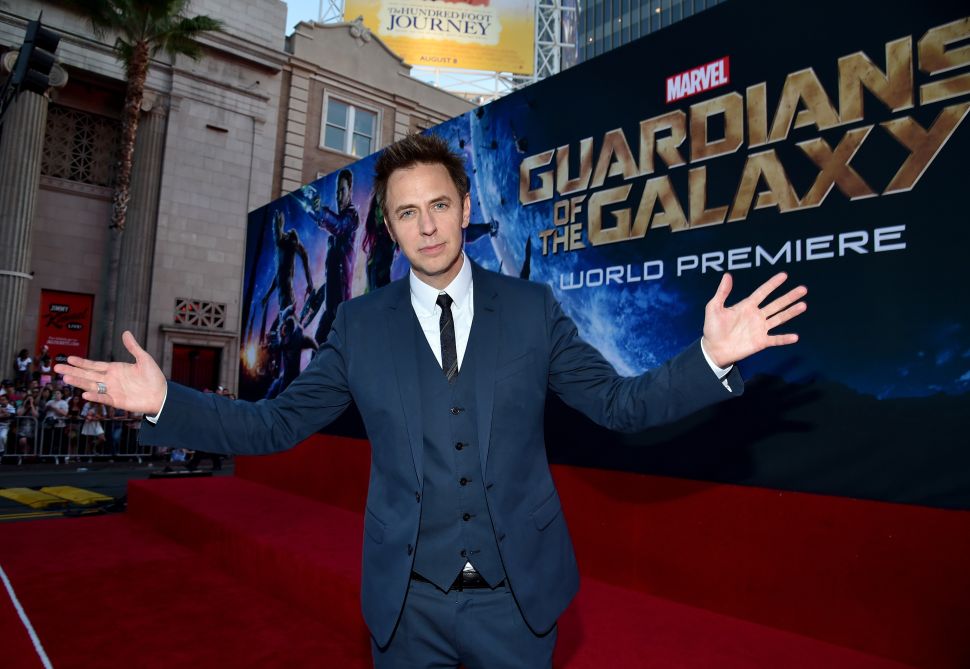