Supporters of the First Amendment learned an important lesson this weekend: when looking to buy journalism merchandise, turn to the Capital Gazette instead of the Newseum.

The Washington, D.C. attraction got in trouble this weekend after Poynter revealed that it was selling T-shirts bearing the phrase “You Are Very Fake News” in the museum store and online.

Many journalists were baffled and horrified that an institution which pays tribute to reporters who died defending the First Amendment would carry merchandise featuring President Donald Trump’s rallying cry against the press.

The museum added that it was a “champion” of free speech.

By Saturday, however, the online hate had taken its toll. The Newseum announced that even though it would continue selling campaign merchandise, the “Fake News” shirts would be removed.

“We made a mistake and we apologize,” the museum said in a statement. “A free press is an essential part of our democracy and journalists are not the enemy of the people.”

As CNN’s Brian Stelter pointed out, the Newseum’s motives may not have been malicious. The museum is $300 million in debt and has explored a sale of its building or a move to another location.

The Newseum hasn’t been able to make up this loss despite a $25 admission fee (by contrast, the Smithsonian museums in Washington are all free). So the “fake news” shirts may have seemed like just another touristy trinket.

Obviously they weren’t. But luckily, consumers looking to wear their support for the media on their sleeves do have a non-Newseum option.

In the aftermath of the Capital Gazette shooting in Maryland (which took place less than an hour from the Newseum), many people wondered whether the paper would survive.

But reporter Chase Cook removed all doubt on Twitter, declaring that “We are putting out a damn paper tomorrow.”

Now Cook’s iconic tweet has been immortalized on a T-shirt. The apparel also includes an inscription that reads “Capital Gazette, 6/28/2018.”

The other items in the paper’s “Free Speech Collection” are a mug and T-shirt that read “Journalism matters today more than ever.”

Prices range from $14.99 to $21.99. And through October 31, 100 percent of the net proceeds from these items go to the Capital Gazette Families Fund, which will provide immediate relief and long-term support to families of the fallen.

This reporter’s “Damn Paper” tee is in the mail.

So take a lesson, Newseum. It’s easy to support the press without using divisive rhetoric. 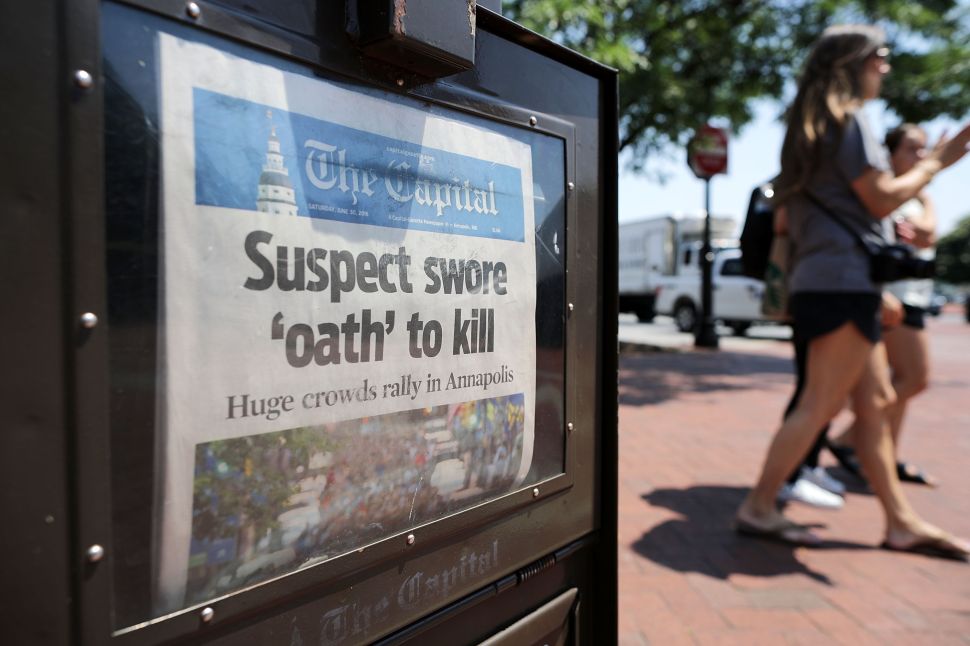