Jamie Dornan just listed his own Hollywood Hills home for sale, but now his cinematic counterpart’s penthouse is also up for grabs.

The three-bedroom, three-and-a half-bathroom Seattle perch that inspired Christian Grey’s apartment in the Fifty Shades of Grey films is on the market for $11.5 million, but its current aesthetic doesn’t necessarily match the decor that the maybe-psycho fictional billionaire favored.

The 5,170-square-foot aerie is located in the Seattle building Escala, just like in the books and films. And it does offer the surplus of glassy walls, marble surfaces, sharp angles and sleek detailing prominent in the movie penthouse. But it also boasts a surplus of aggressively opulent upholstered velvet seating and plenty of mirrored furniture, as well as at least one gold statue.

A private elevator opens into the home, which sold for $8 million in 2016. It contains a media room and a separate dining room, per the listing held by Realogics Sotheby’s International Realty broker Scott Wasner, as well as various sitting areas with metallic accents and a very impressive wraparound deck.

No signs of Christian Grey’s extravagant wine cellar just yet, but the house is equipped with a full bar. And though we’re not seeing many red rooms, numerous rouge silk throw pillows have been strewn about.

The kitchen features shiny wood cabinetry and a marble-topped breakfast island, and you’ll find white-painted wood flooring throughout the pad.

The master suite is as glitzy as the rest of the unit, with a separate sitting area that looks partially inspired by Versailles or a Venetian villa, while the walk-in closet is filled with some very sparkly gowns.

The building amenities include a full-time concierge, a lap pool, a gym, a yoga studio, a catering kitchen, a private dining area and a theater (for that next time you want to watch Dakota Johnson and Jamie Dornan looking really uncomfortable as they attempt to flirt in Fifty Shades).

If this glossy dwelling isn’t your cuppa, there’s another movie home for sale in Oregon that might be. You may recall that Fifty Shades started out as Twilight fan fiction, and Bella Swan’s house is also currently listed for sale—it’s going for a mere $349,900. 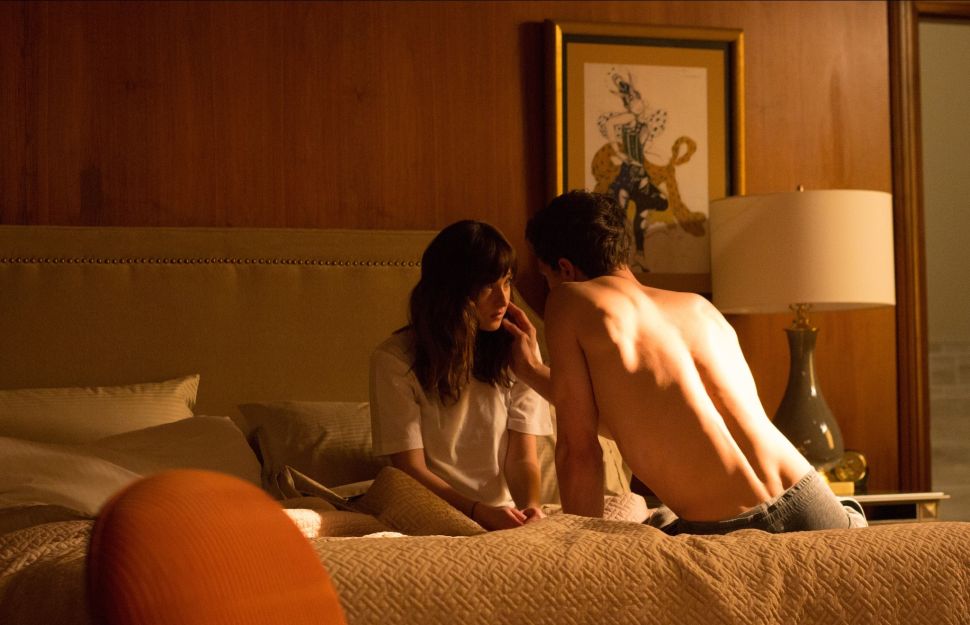