Why is a raven like a writing desk? Lewis Carrol’s Mad Hatter didn’t know, and it turned out the journey was perhaps more important than the answer. Such is the case in Hey Riddle Riddle, a new podcast by Headgum that combines riddles and problem solving with improvisation. Sure it’ll get you thinking, but the point isn’t necessarily about finding the answer to the riddle, it’s about enjoying the hijinks along the way. Hosted by Adal Rifai (of comedy podcast Magic Tavern), John Patrick Coan (known as JPC) and Erin Keif—three veterans of the Chicago improv scene—consider this the best new show for testing your strength in stifling laughter, should you choose to listen to it on any form of public transit.

Each week one of the improvisers picks out the riddles for the show, including some submitted by listeners. Posing them as questions to the other two comedians, all three will occasionally detour for some on-the-spot sketches based on the jokes that crop up along the way.

Longtime puzzlers will recognize ancient brain teasers such as the famous riddle of the Sphinx from Greek Mythology (What creature walks on four legs in the morning, two legs at noon, and three in the evening?), and be tested along with the show’s cast.

Observer caught up with the talented trio over Skype and talked about why riddles make for perfect podcasting material and how humor helps the brain with problem solving.

The answer is a coffin! I heard this one as a kid and remember being like, “whoah, this is dark, but also I can’t wait to pose it to everyone I know and delight in it.”

So how long have you guys been thinking about this new podcast?

AR: We’ve been discussing it since last fall. I was thinking of [creating] something I would want to listen to, and I’ve been following the adage of “don’t ask people what they want, show ‘em what you like.” I love escape rooms, riddles and puzzles. Out of that came making a podcast that filled that gap.

How long have you known each other?

John Patrick Coan: I’ve known Adal for several years. He was a coach on one of my first improv teams in the city, and now we do a show called Whirled News Tonight, which has been running for 15 years as one of the premiere shows at the iO Theater. I’ve been doing it for the last 3 years.

Erin Keif: And I started subbing on it about 18 months ago, and that’s how I got to work them.

You constantly one-up each other with jokes, and also agree with each other on the silliest things—I love how you build in themes as well as one-offs within each response to a riddle.

JPC: I think the intriguing part of this show is how with improv you take premises that you riff off of and that’s what we’re doing with this show. We’re building improv scenes based off these sometimes antiquated or convoluted riddle premises. I think the best part is how rarely we answer riddles that we consider to be well crafted or very good. They’re often pulled out of the past or ones that have open interpretations to them.

AR: We don’t read the answers in advance because we want to try to solve them together and a lot of times we get some terrible riddles. Sometimes if I’d read the answer first, I never would have read it on the show, but then it’s too late.

EK: I think part of the reason why it’s fun to perform with JPC and Adal is how quick they are to pull something apart word for word, which is why riddles are perfect for podcasting. They make fun of the wording, or they make fun of my answer because they’re listening so hard.

JPC: We tend to not let each other get away with anything, and in a situation where the riddles are things we don’t know the answers to, we’re going to take some wild stabs. Putting ourselves out there is part of our dynamic; we latch onto bad ideas as much as we latch onto good ideas.

It feels like a game show without any prizes.

AR: I feel like the energy we bring to the show is the joyous energy that we all have after an improv show, hanging out in the green room doing bits and picking on each other. Magic Tavern feels like the onstage portion of an improv show where we’re building a world. Backstage feels like a Jenga tower we’re starting to tear it down until it collapses.

JPC: We all wanted to do something that we would enjoy doing, and you can tell listening to it that we’re all laughing a lot during the show. Some people will probably hate that and leave us bad reviews about us laughing at our own jokes. I just hope that people who listen feel that same sense of joy and engagement.

Can I call you guys the premiere riddle comedy podcast?

JPC: We insist. That’s aspirational, and we hope to one day be the premiere but right now we know we have stiff competition.

Adal: I was talking to a friend of mine named Sandy Weisz who does escape rooms and he said he was thinking of doing a podcast about riddles but it seemed too hard to do. Once he heard us, he told me that humor was the missing element, that’s what it needed. It was nice to hear that it needed some amount of play and humor in it versus tackling it from a cerebral element.

Do you think that when you approach riddles from a humorous perspective it allows your mind to relax and you can figure them out subconsciously?

Erin: I agree. I came into this not being a huge riddle person but I feel like I’m slowly being convinced to love riddles. It’s a great podcast to listen to while on the train when you want your brain to move but also be entertained.

Adal: Unlike Magic Tavern, each episode stands on its own. You can listen to any of them and be fine, but If you are a regular listener, you’ll get jokes and call-backs that you would miss otherwise, like a Katamari ball of fun collecting everything along the way.

JPC: A big part of every podcast is providing an entry point for people who want to start listening. Some of my favorite podcasts are long-form and you can’t just pick up the latest episode, you need some context to really enjoy it. We tried to make it rewarding for every new listener or for people who only listen for certain guests.

Do you want people to send in riddles?

AR: We encourage people to send us riddles to hrrpodcast@gmail.com and we’ll try to work those submissions in at least once per episode. In the future, we might do an episode that’s only a mailbag.

New episodes  of Hey Riddle Riddle come out every Wednesday wherever you get your podcasts. 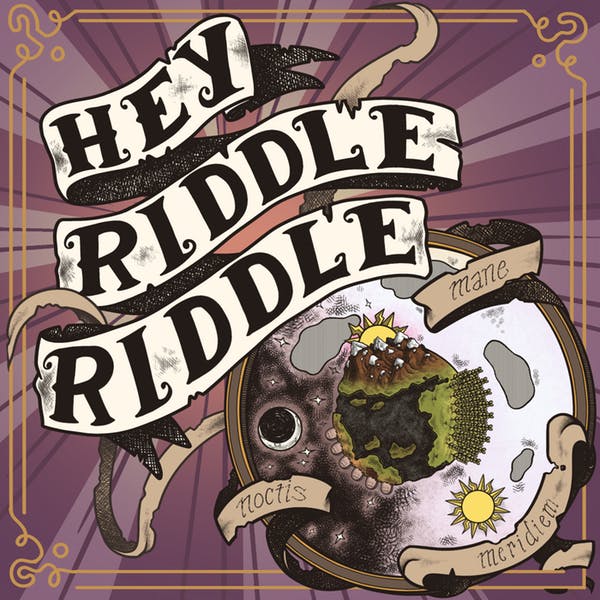