In winter 2007, John McCain’s presidential bid was bleeding for money. The campaign had fired senior staff. And the candidate had only 54% of support from Republicans in his home state of Arizona ahead of the primaries. But it was a speech Vladimir Putin gave at the Munich Security Conference—where the Russian president lambasted the United States for cultivating a world of “instability and danger”—that set the senator’s teeth on edge.

“I remember John McCain becoming furiously angry with this speech and wanting to do an immediate press conference to respond to it,” McCain’s former foreign policy advisor Niall Ferguson, a British historian, told Observer. “That’s when I saw the impulse McCain, ‘Fighting John,’ who had to be talked out of this vehement rejoinder of Putin.”

“Fighting John” was a side of McCain that commanded the respect of his fellow soldiers, and later defined his career as a politician. Former CIA Director R. James Woolsey, who also advised the senator’s 2008 bid for the presidency, recalled his interviews with half a dozen Naval officers who had been detained with McCain at Hao Lo Prison—the infamous Vietnamese torture site nicknamed ‘Hanoi Hilton’ by American soldiers.

“They all said, pretty much this: ‘John and I have always gotten along most of the time, but we have on occasion gotten in fights…Last time we played poker, we nearly brained each other, but I love him like a brother and would follow him anywhere,'” Woolsey told Observer. “And that’s John McCain.”

Woolsey recounted the famous story of the North Vietnamese offering McCain an early release because his father was a Commander of the Pacific fleet. McCain refused, and endured torture to send a message to his captors.

“They kept trying to get him to sign something asking him to be released, and he wouldn’t do it,” said the former CIA director. “And they started shoving him down the hall and torturing him. About the second day they did that, John started fighting the guards. He wasn’t formally struggling, he was chopping at their Adam’s apples and gouging at their eyes, kicking them in the testicles. Each day they had to use more guards.”

“He wanted everybody to know he was not giving in on being released early,” continued Woolsey. “Instead of trying to say something persuasive or whatever, he at the top of his lungs, shouted all the way down, every day, an incredibly hilarious and absolutely gross and really nasty and really dirty chain of cuss words.”

Stories of McCain’s resilience spread throughout the prison and became folklore among prisoners of war. Mike Cronin, who later worked on both of McCain’s presidential campaigns giving speeches to veterans groups, was one military pilot inspired by the legend of Hanoi Hilton.

“We were both prisoners in Hanoi. I was actually there before John McCain, but even though I never met him personally while we were prisoners, I knew he was shot down and I heard all about his story and how badly he was injured,” Cronin told Observer. “His entire life was service to the country.”

“It was his stubbornness, his strong stance that I loved when arguing with him,” reflected Duyet.

In Washington, McCain developed a reputation for his hawkishness—later advocating for the Iraq War and deterrents against Russia as an Arizona senator during the Bush years. While many anti-war critics are quick to associate McCain with the neoconservative movement, Ferguson argued his values were more nuanced, having been forged during his time at Hanoi Hilton.

“McCain had actually seen war and suffered its consequences,” explained the historian. “It gave his attitude toward military conflict a very different quality and a good example was the debate on torture which was one of those litmus tests, if you’d like, of the Bush era. McCain was so clear and unequivocal on that issue at a time when some neoconservatives were distinctly cavalier on what could be accomplished with enhanced interrogation.”

Ferguson added that McCain’s worldview was “closer in spirit to the generation of World War II.”

“McCain represents a last connection to the so-called greatest generation even though he belonged to the generation after,” said Ferguson. “The other way I’d think of McCain, in Roman terms, was the last personification of Republican senatorial virtue.”

“He called it straight,” said Woolsey. “And what he thought and what he believed, he said and sometimes he said it rather stridently. Sometimes he took positions even I don’t agree with, but he was a man of great honor and a great sense of purpose for the country.” 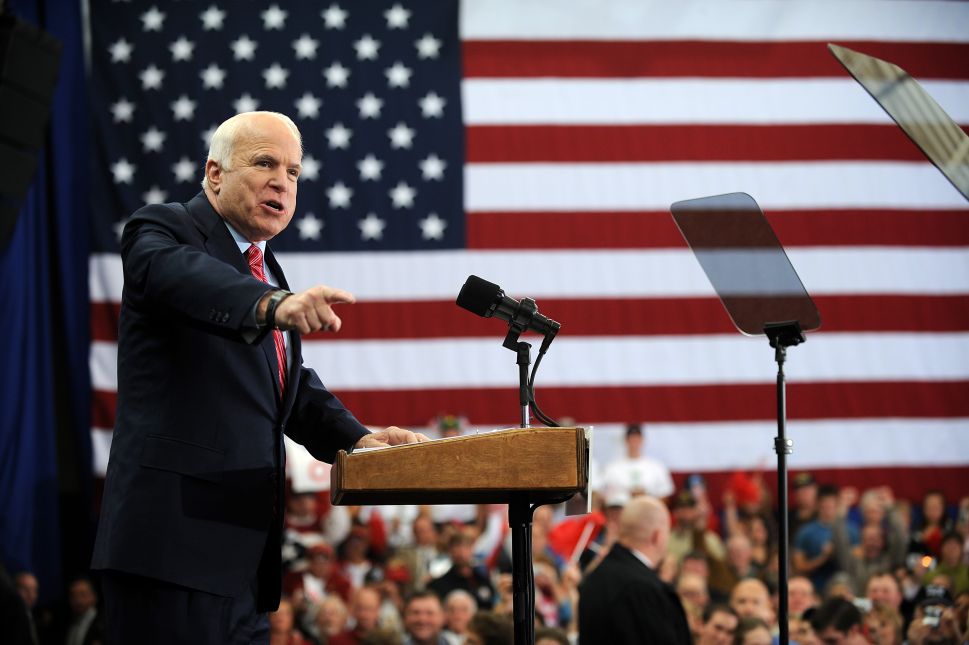