Two years ago, I did something bold and reckless: I turned off AutoCorrect. After years of fighting against its incorrect fixes, I snapped. I decided that I didn’t want to be inconvenienced for a few cumulative seconds each day. I’d much rather appear drunk all the time.

It’s a low-stakes risk, for sure, but I’d been using AutoCorrect for about a decade straight, ever since I got my first smartphone. I had become used to the safety net, and couldn’t really imagine texting without it. Allegedly it saved me from embarrassing spelling errors, caused by my clumsy thumbs.

It felt empowering to drop it, but I wondered: would my messages turn into incomprehensible garbage? Would I lose friends? Jobs? The respect of former spelling-bee champs, especially those who might want to give me my next job?

But before we go forward, let’s step back, to the beginning of this mess.

According to Wired, Microsoft employee Dean Hachamovitch invented AutoCorrect in the ‘90s, while working on the Word team, in an effort to make typing easier. It launched with Word 6.0 in 1993.

The feature really gained traction with smartphones. When the first iPhone was introduced in 2007, for example, Apple’s website advertised an “intelligent keyboard” that “prevents and corrects mistakes” as a feature. It made sense at the time; tiny smartphone keyboards made users prone to errors. And since we were all still figuring out what life with smartphones meant in many ways, people were expected to write with the formality expected from desktop computers.

Apple also included in its mail app the now-infamous default promo signature—Sent from my iPhone. While mostly a marketing device, it also conveyed to potential readers that they should perhaps lower their expectations w/r/t mistakes. Basically: hey, i’m typing on a tiny touch screen here, give me a goddamn break. Naturally this eventually resulted in a number of ostensibly clever but actually painfully irritating parody iterations that traffic in novelty bumper sticker humor, mostly big among the tech/biz/Quora crowd, i.e. Sent from my iPhone by evil ninja monkeys. Sent from my iPhone 5G – 2G = 3G. Those jokesters!

It was an imperfect feature, and depending on who you ask, a pretty egregious example of over-engineering, seeming to cause as many problems as it purported to solve. It couldn’t handle curse words (“i wish autocorrect would just go to he’ll”), and popular slang was mostly excluded. AutoCorrect errors became an early meme.

By 2010, the website Damn You Auto Correct began chronicling them, eventually releasing a popular book comprising of stuff like: “he’ll eat you out on New Year’s Eve (“rat out”); “Rihanna for my bald spot” (“rogaine”); “going to watch dad’s balls drop then go to bed” (“Dick’s Ball”). You get the idea!

The premise of these type of jokes have become pretty stale, but it’s still worth appreciating this brief moment of mass-scale miscommunication, most of it apparently sexual. Suddenly a feature that was supposed to work seamlessly was best known for its duck-ups.

But also, interestingly, in the subsequent decade since it gained prominence on smartphones, our expectations for formality in our digital spaces have changed. The way we communicate online is now mostly freeform, looser. We’re all totally comfortable blasting out garbled messages in most emails, texts, Hangouts, and Slack chats. Grammatical rules are fluid. Errors are insignificant, and often written with stylistic intent. Using an all-lowercase style is the norm. Punctuation is considered rude. A postmodern, descriptivist world has won out.

In this context, AutoCorrect actively works against how most of us actually communicate. It’s an annoying grammar Nazi, who is almost always wrong. It works against our intentions. It does what all the worst tech inventions do: it gets in the way.

Living without AutoCorrect at first required some adjustment. I warned friends that I had turned it off, in an attempt to stave off judgement of spelling errors, and questions about whether I was having a stroke.

At first, it was mildly frustrating. You quickly begin to realize how much work it actually does. Most of us learned to type on mobile phones with it, so we’ve become accustomed to pounding out approximations of words with the expectation that the software will do the hard work of actually spelling stuff. I felt like I had to relearn how to type on a glass screen. More precision was required.

My text messages became riddled with small errors, many too annoying to get in there and fix. Some recent ones, completely out of context:

– gonma have to start sneaking booze in

On some level, turning off AutoCorrect merely substitutes one set of annoyances (constantly fixing incorrect words that are forced upon you via automation) for another set of somewhat different annoyances (backspacing incomprehensible spelling errors caused by clumsy thumbs). But I stuck with it, partially because I liked having some level of control and personal responsibility over my errors, and also because it allowed for typing slang and neologisms without annoying “proper” auto corrections. Now I could write something expressive, like coooooool, without hassle.

After some time without AutoCorrect on, I stopped missing it. On some level, it was supplanted by QuickType, which helps out only when you want it to. It allows for some of the assistance and functionality of AutoCorrect, with much less intrusive auto-.

Mostly, though, I’ve stopped correcting most of my own spelling errors, and started accepting them. Unless it’s something official or important, like a legal document or a cover letter, who cares? Even with my most egregious mistakes, my sentences were still legible. Now, without the constant need to fix minor mistakes, I feel free, and can just barrel forward, focusing only on whatever I’m trying to say, even if I don’t say it completely as intended. Mistakes exist, but they’re MY mistakes, not the machine’s. It’s liberating.

I can now confirm, with grizzled world-weary experience, that we no longer need AutoCorrect. So I implore you: Go to your phone’s keyboard settings and turn it off. Free yourself from its tyranny. Together, e cn enf autortct onazce and fot alk. 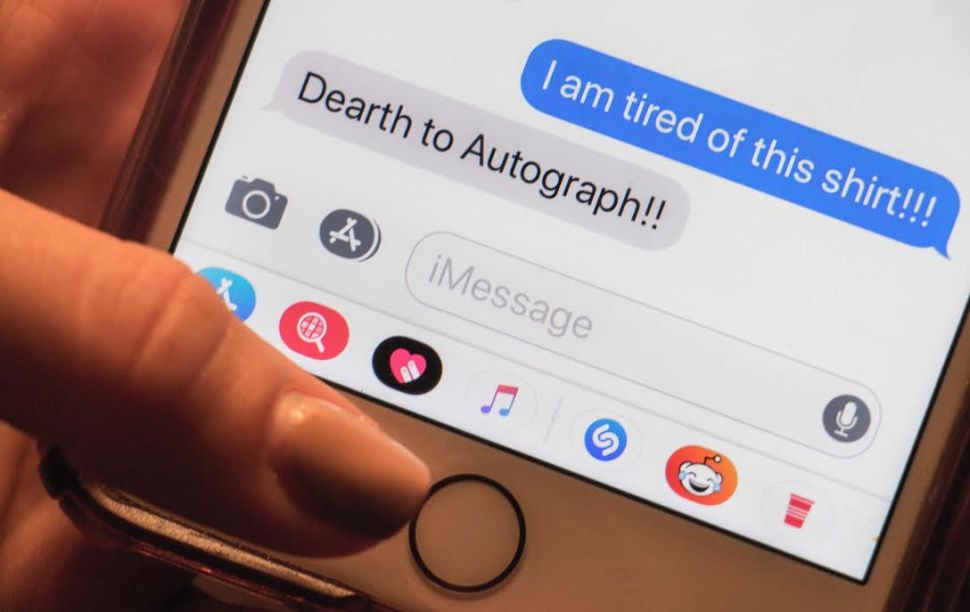