Even though Pippa Middleton isn’t technically a royal, she’s still living her most princess-worthy life this summer. Aside from watching Wimbledon from a perch in the Royal Box, Kate Middleton‘s younger sister and her husband, James Matthews, reportedly jetted over to Porto Ercole in Tuscany for a pre-baby getaway, where they opted for a stay at the über-glamorous Il Pellicano.

The Italian hotel is located atop a cliff that overlooks the Argentario Bay, and after a glimpse at Il Pellicano’s Instagram, it’s easy to see why photographer Slim Aarons was so inspired by the Mediterranean landscape surrounding it during his frequent visits—sadly, Middleton didn’t go crazy on social media during her own visit there.

When your #TBT archive is @slimaarons

Il Pellicano is a longtime fixture in the area. A retired British soldier and an American socialite opened it in 1965. They lived there in the early 1960s when it was a private villa, but they later expanded it into a bigger hotel.

The current owner, Roberto Sciò, purchased the hotel in 1979, and his daughter, Marie-Louise, is now the creative director. It underwent a major renovation in 2006, and she curated the interiors, adding  touches like vintage armchairs, Fornasetti drawings and plush fabrics. The lavish resort’s guests have included Emilio Pucci, Sophia Loren, Jacqueline Kennedy Onassis and Kate Moss.

Il Pellicano contains 34 rooms and 16 suites, and rates during the high season start at approximately $780. It features two restaurants, including the Michelin-starred Pellicano, and a spa with Santa Maria Novella products. If a match on the tennis court isn’t your thing, you can rent a private boat instead.

The private waterfront terrace, with lounge chairs and parasols, offers a picture-perfect view that will be instantly recognizable to fans of Slim Aarons. A full staff will accommodate all requests at the beach, where Middleton apparently spent a bit of her time, according to Page Six.

Middleton recently announced her pregnancy in her Waitrose Weekend fitness column, detailing her rather intense workout routine (it wasn’t exactly a royal announcement, but hey, not everyone has Kensington Palace representatives). Middleton wrote in a more recent column that she’s now very into swimming, so it’s a good thing the hotel has a saltwater pool.

Perhaps in the future Middleton and Matthews will bring along Prince William and Kate Middleton for a double-date vacation. They could all go back to Mustique or head to St. Barts, where Matthews’ family owns the Eden Rock resort. 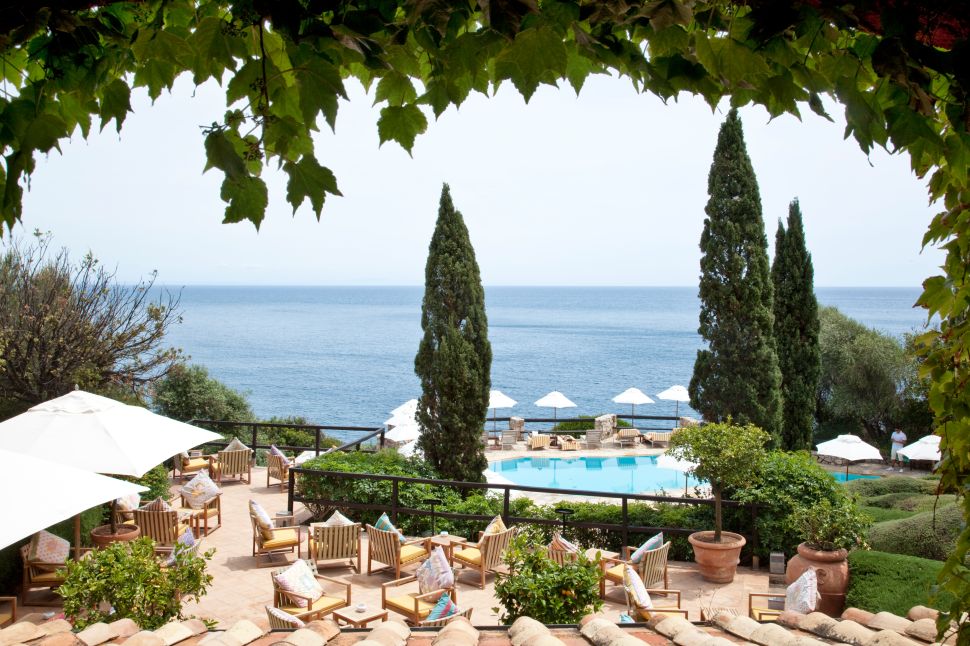