Late Sunday night, Facebook banned four of the main pages associated with InfoWars, the conspiracy theory- and brain medicine-peddling media outlet run by Alex Jones. The ban comes after weeks of equivocating and half-measures from the platform, like suspending Jones himself for 30 days last month and confusing and contradictory explanations, including a tortured Holocaust denier analogy from Mark Zuckerberg. Joining Facebook in the purge were Apple and Spotify, who, like the podcast network Stitcher last week, removed Jones’ podcast from their listings. Spotify too had previously attempted to split the difference by removing a select number of InfoWars related podcasts, but course corrected with a full ban.

The reasons for the removal from each platform vary in specifics, but by and large are centered on InfoWars’ offensive content, and not their habit of lying and spreading misinformation.

“We take reports of hate content seriously and review any podcast episode or song that is flagged by our community,” a Spotify spokesperson told Observer. “Due to repeated violations of Spotify’s prohibited content policies, The Alex Jones Show has lost access to the Spotify platform.”

Characteristically, Facebook was more convoluted in an 850 word explanation that bordered on the metaphysical. The pages were removed, they said, for  “glorifying violence, which violates our graphic violence policy, and using dehumanizing language to describe people who are transgender, Muslims and immigrants, which violates our hate speech policies.” None of the removals were related to “fake news” the company added.

All of this is happening as Jones has found himself in court yet again, facing a defamation claim filed by parents of two children killed in the 2012 Sandy Hook shooting. Jones has infamously repeatedly claimed the shooting was a hoax, and that no one actually died that day.

All in all it’s a big win for InfoWars.

While a crackdown of this scale may seem like a significant setback, it’s exactly the type of thing they thrive on. There’s nothing the far right in America loves so much as playing the victim. What better outcome could there be for a group that’s been warning of impending censorship by the mainstream media and internet platforms—all controlled by a cabal of Democrats and, well, (((other people)))—than to have the prophesy fulfilled?

It’s the type of thing that will be and already has been used as a rallying cry for their supporters, and, because this is the real motivation behind their work anyway, as a potent fundraising tool. They’re gonna sell an absolute shit load of Alpha Power Dog Dick Serum off of this to be sure.

Today the site quickly took to framing the bans as part of a campaign led by “the likes of CNN and Buzzfeed” and Democratic Congressman Ted Deutch of Florida, who questioned Facebook last month in a congressional hearing about what, if anything, it would take to get them to ban InfoWars.

“What we are witnessing is an ideological purge intended to re-define the very concept of free speech,” InfoWars’ Paul Joseph Watson wrote today. “If free speech does not include controversial/unpopular/offensive speech, it doesn’t exist. A society in which free speech doesn’t exist is doomed to collapse into authoritarianism.”

“What conservative news outlet will be next?” Jones asked in a tweet today.

And therein lies the reason why Facebook and others were so wishy-washy about the entire process all along. They know very well that any action taken against a popular right-wing site like InfoWars can and will be used to stoke the fires of their anti-conservative narrative.

In fairness, it isn’t a problem with as clearcut a solution as those of us who rightfully despise InfoWars and would like to see it vanish might want. The question of what role platforms can and should actually play as the gatekeepers of the dissemination of information is a fair one. No, a private business enforcing its terms of service when they’ve been violated isn’t a First Amendment issue, but when services become as large as Facebook and Apple, effectively becoming the only games in town, it is fair to pause and think about whether or not we’re comfortable leaving such choices to the opaque and unaccountable tech companies.

That is, of course, if you buy into the premise of the slippery slope that Jones and company are eager to sell. You’d have to be a pretty gullible mark to buy it, which, as it happens, is their entire audience.

The rest of us shouldn’t concern ourselves with the hypothetical slippery slope. What if, some day, the platforms decide to ban a page that the left favors? OK, does that page also traffic in a nonstop deluge of conspiracy-mongering and lies? Then so be it, let it be removed.

To buy into the whataboutism at play here is to assume that either side, the right and the left, are playing by a set of agreed upon rules and that action from one against the other will invariably be met by an equal and opposite reaction.

There’s simply no reason to believe this. For one, the right will lie about the mainstream and left-leaning media no matter what. They are not waiting for an official discourse rules violation from the left to feel like they can do this. If they were given the opportunity to have a left-leaning page removed, they would already do so anyway. To accept the right’s framing of this is to already have conceded.

Do not spend a minute of your time defending InfoWars. They wouldn’t extend the same courtesy to you. To do so is to accept the code-addled moral cowardice of the tech neutral brain that suggests there’s no such thing as truth and that verifiable facts are some unattainable ideal. Who’s to say whether or not those children were massacred at Sandy Hook. You have to hear both sides.

No, you do not. We cannot, and should not, be able to stop anyone from saying the stupidest and vilest shit imaginable. What we don’t have to do is boost their signal. There is such a thing as the truth, goddammit, and every step we take to reassert that premise is crucial. Anything else is an dereliction of duty. 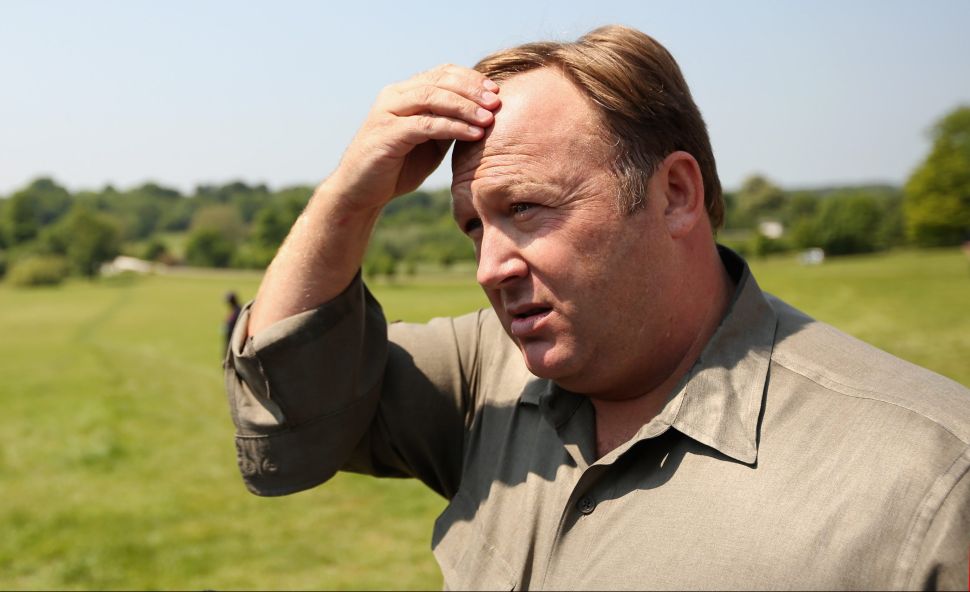