As the fifth chapter of the never-ending Bachelor in Paradise story progresses, a sandy-haired ladies’ man with the soul of a Dartmouth-legacy frat bro has turned out to be so much more interesting than all those caterwauling couples: That would be male model Jordan Kimball.

When we first met Jordan, an insufferable narcissist vying for Becca Kufrin’s heart, on The Bachelorette, he spent most of his screen time thoughtfully teaching the guys about different modeling poses and criticizing everyone’s outfits, handily establishing himself as a villain.

“Jordan has regularly been at the very bottom of our weekly Bachelorette Power Rankings, below even the riffraff that has been evicted from the mansion by Becca so far,” Nick Schwartz of USA Today wrote at the time. “He’s stripped down to his underwear to impress Becca twice, he’s bragged about his 4,000 matches on Tinder and he’s been awkwardly rejected after going in for a kiss.”

Jordan is still a narcissist, but somehow he’s evolved into an infinitely more sufferable one. Turns out the chaotic Paradise environment is perfectly suited for him. Unbound by the constraints of the main franchise, Jordan is now free to strut around in Hawaiian-print sleeveless rompers, throw teddy bears into the ocean and pitch drunken hissy fits.

In other words, without the pressure of pursuing one woman, his guilty-puppy-dog charm is both acceptable and an asset to the series’ chaotic narrative.

Jordan’s aggressive manner is reminiscent of another notorious ego within the Bachelor canon: Chad Johnson, the meat-chomping, insult-spitting looming terror who spent his tenure on JoJo’s season wondering aloud why every other guy on the show was so desperate to rain praise on someone they barely knew.

Chad often seemed to be on the cusp of inflicting physical harm, and his eventual dismissal came as a relief, but his comments about the insane nature of the show resonate to this day. Jordan, while petulant, is thankfully not at all violent, and his well-chosen bon mots ring just as true.

In addition to instantly falling prey to a vicious crush on pink-haired Jenna, Jordan has taken it upon himself to keep up a running commentary on his fellow cast members that’s frequently hysterical. My extensive notes on this week’s four hours of programming are peppered with things like “omg JORDAN” and “did Jordan actually just freaking do that” and “Jordan has that rare ability to be a genuine player; he believes his own bullshit. He’s not being vulnerable, he’s being a genius.”

Jordan isn’t charmed by Leo’s lustrous locks and buff physique either. “All I’m seeing is hair,” he sniffs. Later, he refers to a French arrival named Benoit as “the millennial Napoleon.”

Jordan also doles out “advice” to the guys on the show that’s almost certainly intentionally terrible. Last week, fans were scandalized when Jordan told Chris, who was trying to figure out how to make out with as many women as possible within a single night, to conceptualize every potential girlfriend as a type of dinner item. “Dinner is Krystal for you—a fantastic main course,” Jordan said. “Then Bibiana for just straight drinks and carrot cake. Dessert obviously is Bibiana.”

Jordan was being an asshole, to be sure, but he’s also smarter than his detractors give him credit for. Encouraging Chris to act like a player would almost certainly make Chris look bad, and work to Jordan’s advantage.

This week, Jordan could have used a bit of salient advice himself. It was definitely a bad idea to write “I’M SORRY” in the sand rather than say the words to Jenna out loud when he did something wrong (namely, he threw a tantrum and yelled at some female castmates after his rival, David, put the moves on Jenna).

As is typical with Jordan, what was almost a grand romantic gesture ended up being all about him, like when he told Jenna she’s “the most stacked girl in Paradise” rather than just calling her beautiful, thus turning a genuine compliment into a showcase of his flair for colorful language.

Jordan appears to be generally harmless apart from his incessant habit of navel-gazing and tossing things into the ocean. In fact, as each episode airs, I grow fonder and fonder of his “the Kennedy cousin no one talks about” vibe, begging the question of whether Jenna is capable of loving him as well.

If Jordan continues to drop uproarious one-liners and oracle-like wisdom over the course of the next few episodes, he could very well cement himself as a standout in the Bachelor canon. If this beautiful disaster ends up proposing marriage to someone on the season finale, though, I’ll audition for the next season in protest. 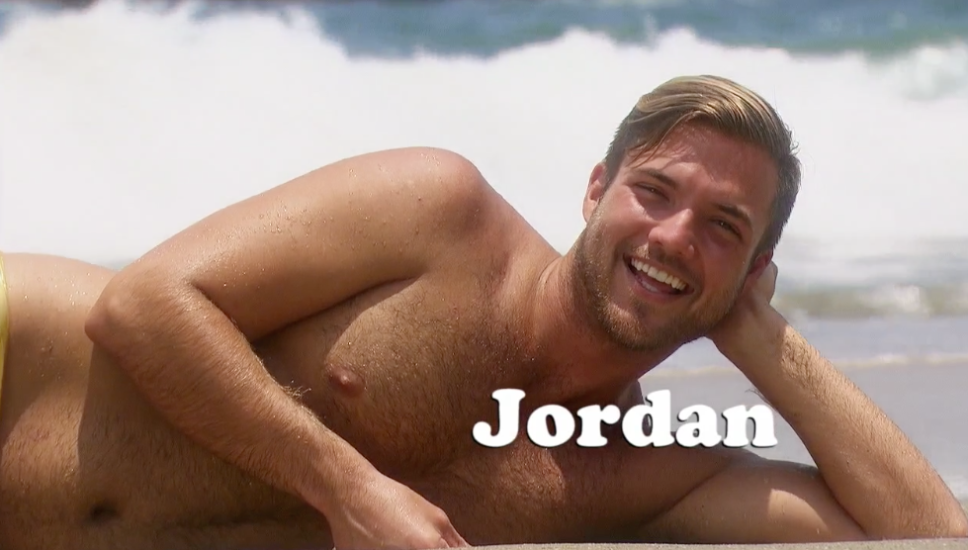