When I met Judy Chicago in Los Angeles this spring, she was a paradoxical mix of careworn and kinetic. The former because she had just arrived off a roughly 17-hour flight following the installation of her new show, “Los Angeles: The Cool Years,” at Villa Arson in Nice, the latter because continuously moving seems like the default setting for her. Chicago has been on a constant mission to hew space for herself, and for women collectively, in an assiduously sexist art world since her arrival on the scene in the mid-1960s.

Kinetic, too, because Chicago is having a moment. The Villa Arson exhibit, a mini-retrospective on view through November 4, features her paintings, sculptures and installations, including Feather Room, recreated there for the first time since 1965. It runs concurrent with her Birth Project, a 1980s needlework series at Pasadena Museum of California Art through October 7. Her first major career retrospective, Judy Chicago: A Reckoning, arrives at ICA Miami in December, timed to coincide with Miami Basel. And early next year, La Scala will publish a major monograph, followed in June by the unveiling of The End, a new series of works at Washington, D.C.’s National Museum of Women in the Arts. And finally, in September 2019 comes another museum-sized show of early works at Jeffrey Deitch’s new space in Hollywood.

“My work has apparently become more relevant than less relevant, which is tragic, in a way,” she told Observer at the opening of her Pasadena show. “On the other hand, I deliberately avoided rooting my work in particular political circumstances. I wasn’t interested in political problems. I was interested in universal subject matter like birth, or women’s history, or the construct of masculinity or the holocaust; and now my new project has to do with death and extinction. I’ve always been interested in big subjects.”

Chicago’s landmark 1979 installation, The Dinner Party honors 39 fabled and historical women with place settings (a plate, flat wear, chalice, napkin and table runner for each) at a massive triangular banquet table. The vaginal imagery designed into each setting gave pause to most museums at its debut, with few institutional takers despite the attention it was garnering. Subsequently, a grassroots tour was implemented, often stopping in gymnasiums and other unorthodox settings. It’s a far cry from the recognition she’s receiving now, and even the work itself has had pride of place in a purpose-built space at the Brooklyn Museum since 2007.

“The back of the Mary Wollstonecraft runner is done in stumpwork,” said Chicago, describing a stitching style used to crochet an image of writer and proto-feminist Wollstonecraft giving birth to her daughter of the same name, who would grow up to write Frankenstein. “Mary dying giving birth to Mary Shelley was one of the earliest images of birth I did, and it was so raw and graphic. And then it was transformed with all these needlework techniques.”

From it sprang Birth Project, a collaboration woven by 150 women needle workers and including roughly 84 textile artworks thematically connected to childbearing. With titles like Birth Tear/Tear, The Crowning and Guided by the Goddess, Chicago employs various forms of textile to capture variations on the theme. “That part of contemporary art history had been erased at that point. There was very little art I could look at,” she recalled, noting the proliferation of birth images in the Neolithic Era. “It is really hard for women in the arts to just do what we want to do. Why should it have been so hard for me to be an artist and make a contribution?”

The Chicago-born daughter of a Marxist labor organizer and a medical secretary, Judy Cohen was dubbed Judy Chicago by gallerist Rolf Nelson, who nicknamed her on account of her accent. She studied at UCLA and later rented a 5,000-square-foot space, which she shared with two other artists on the corner of Raymond and Colorado in Old Town, Pasadena, during the 1960s. “The biggest compliment you could get then was, ‘Oh, you paint like a man,’” she laughed.

At the time, Ferus Gallery was the nexus of modern art in Los Angeles, and Walter Hopps was its curator. On a visit to the studio when she was working on “Rainbow Pickett,” a landmark piece in her early career, he stood with his back to her work, looking only at that of her male roommates. “He told me in later years that he couldn’t cope with the fact that I was making art that was stronger than the men and he had to avert his eyes,” Chicago recalled, adding, “and actually said it like I would say, ‘Oh Walter, I totally understand.’”

She credits artist Billy Al Bengston with teaching her what it means to be a professional artist. As a student on a visit to his studio, she looked around and asked, “How do you support this? Do you have a job?’ He said, ‘Being an artist is my full-time job.’ He taught me the ‘something’s-going-to-happen system’ of supporting yourself. This relates to my starting the Fresno Program, because women at that time were not raised to live with that level of risk. I had watched in graduate school…there were a lot of women that came to school with me but as I went along the first stage of my career, more and more of them disappeared.”

“We needed a space of our own. Even I, who was working for 10 years, and having some success, was not comfortable being myself around men. If I wasn’t, how would a 19-year-old student?” she asked. “When I was in art school, it was the landscape you traversed. Male professors, they didn’t take their female students seriously. They were looking at them as potential bedmates. That’s just the way it was.”

Chicago bumped into Bengston at the 2010 opening of “Pacific Standard Time,” the Getty’s massive review of L.A. artists, and told him, “I never thanked you for what I learned from you.’ And he said, ‘Yeah, Judy, I was such a male chauvinist. That’s why you did what you did. I’ll take all the credit and all the blame.’”

Bengston’s words sound like a reckoning of sorts, a subject that seems to be on her mind lately, serving as the title of her Miami retrospective and alluding to her current project, The End. “It’s one of the hardest projects I’ve ever done,” she said of the 37 paintings on black glass and porcelain, along with two bronze reliefs. They include 13 self-portraits of her own demise.

But even in carrying that emotional load, with a renewed interest in her work, the year ahead holds many joys for the 79-year-old. “There are so many things I’m surprised at. I’m surprised I’m still here. I was extremely surprised when I discovered that not only was The Dinner Party being studied in classes, but the misogynist criticism that greeted it was also being studied. I’ve been happily surprised by all those Instagram accounts of all the vagina china, Club Clitoris…I love it! It’s so wonderful to see young people claiming the power of their female bodies. It’s great!” And even with the embrace of her seminial work, perhaps the biggest coup for Chicago this year is that finally that’s not all she’s recognized for. “But I’m very, very happy about the fact that the larger body of my career work is starting to emerge from behind the shadow of The Dinner Party. That’s taken a very long time. It’s keeping me very, very busy.”

Something she’s not surprised about? “The prospect of Roe v. Wade being overturned.” Her frenetic pace is obviously still more than warranted. There’s plenty yet to say about the representation and autonomy of women in our culture at large. 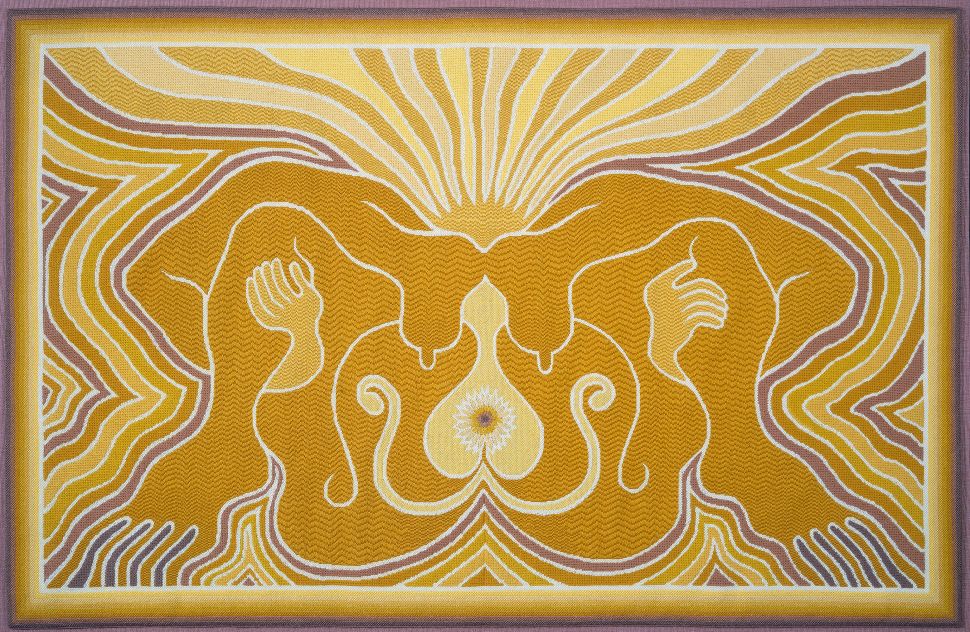