The Daily Caller has never been a fan of traditional media. But the site’s latest attack on The New York Times is desperate even by its own low standards.

Today the site’s Media and Breaking News editor Amber Athey posted a trollish story about the Gray Lady’s use of state abbreviations.

The Times piece that annoyed Athey so much concerned the record amount of women running for governor across the country.

But The Daily Caller didn’t focus on the women themselves. It focused on the states they represented—more specifically, the Times‘ abbreviations for said states.

Athey wrote that the “shoddy graphic” abbreviated Maine as “Me” and Texas as “Tex,” incorrectly shortening the state names.

This story would be asinine media bashing even if The Daily Caller’s contention was correct. The problem is the site was dead wrong.

The U.S. Postal Service has used “Me” (or the uppercase ME) as its official Maine abbreviation since 1963. And while the postal abbreviation for Texas is now TX, the Times style guide still uses “Tex.”

Yes, the Times has its own style guide—another fact The Daily Caller conveniently omitted. The site accused the Times of getting AP style wrong, even though the Times has never used AP style, preferring to trod its own path.

Reporters at other outlets roasted The Daily Caller on Twitter. And even Dictionary.com got in on the fun.

But Athey stuck to her guns, facts be damned.

it is 1:25 PM on a Monday and I now have the internet debating the proper abbreviation for Maine … hell yeah

Bruh "ME" is an acceptable abbreviation. "Me." is not. This isn't hard.

There’s no doubt this is a hilarious self-own. But the Daily Caller has more than enough of its own problems without dragging the Times down with it.

The site was founded in 2010 by Tucker Carlson, who told Observer that most journalists are “conventional, trite and stupid cowards” who “go to Twitter to figure out what they’re supposed to believe.”

Ironically, the Daily Caller has a shoddy grasp of journalistic ethics itself. The Trump campaign sent 25 fundraising emails to the Daily Caller’s subscriber list, paying the site $150,000 along the way.

During the Obama administration, the Daily Caller produced hard-hitting exposes about the First Family’s prejudice against white dogs. One of the site’s reporters also interrupted the president mid-speech in 2012

The Times also has plenty of issues beyond its style guide.

Its newsroom was one of many workplaces rocked by #MeToo. Times reporter Glenn Thrush was suspended from the White House beat over sexual misconduct allegations. When he was reassigned to cover housing and urban development, he promptly started insulting homeless people.

The paper’s stories are also sometimes imbalanced. A recent study found the Gray Lady quotes Republicans twice as much as Democrats.

But the biggest issues are on the Times op-ed page. The paper has made some great hires in that department, including Recode’s Kara Swisher and Uber whistleblower Susan Fowler.

However, just last week, the Times came under fire for hiring Sarah Jeong as a tech op-ed writer. Conservative media pounced on old tweets in which they claimed she was racist against white people (that’s not a thing). The Times said the tweets were inappropriate but stood by Jeong.

But some of the other writers who have gotten a Times platform are truly eyebrow-raising. The section’s current staff includes climate change denier Bret Stephens and Bari Weiss, who’s obsessed with the “intellectual dark web.”

The biggest speed bump came in February, when the Times hired Quinn Norton as a tech op-ed writer. But social media users began surfacing old tweets in which she defended neo-Nazis and used words like “nigger” and “faggot.”

So as quickly as they hired Norton, the Times let her go. Her career at the Gray Lady lasted a total of seven hours.

If they wanted to, the reporters at the Daily Caller could produce a hard-hitting analysis about the real problems at the Times. But that would require actual journalism. 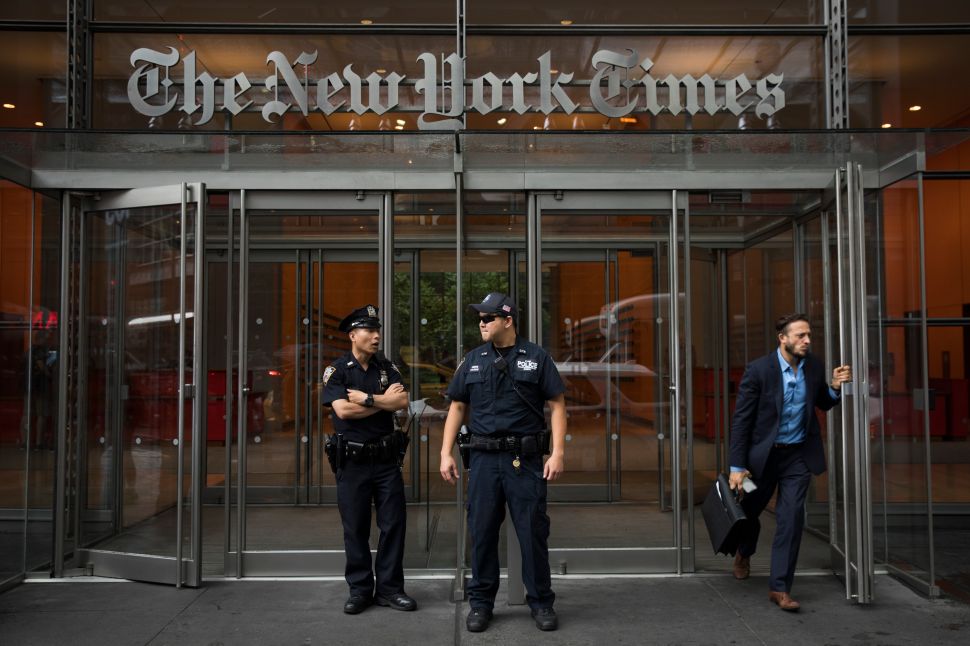