Michael Cohen’s guilty plea in Federal court Tuesday afternoon dealt a powerful blow to the president, and it was followed in one-two-punch fashion by a potentially devastating hook from Cohen’s lawyer, Lanny Davis, who’s been making the rounds explaining that his client will be “more than happy to tell the special counsel all that he knows” about any crimes, collusion and hacking. Yesterday, investigators added yet another slap to the face with a subpoena for Cohen in their investigation into the Trump Foundation.

But the deadlier blow—the one that kills you days or weeks later— may have come from Paul Manafort. The president’s campaign manager in the pivotal mid-2016 period was found guilty on eight felony charges and is now facing decades in prison. (In predictable contrast, the president publicly praised his newly convicted friend as a “brave man” for not “breaking” like Cohen did.) But Manafort’s ordeal—legal and political—has only just begun. Unless the president exercises his pardon power, Manafort will die in prison.

Unlike Cohen, Manafort is deeply enmeshed in Kremlin affairs, stemming from his near-decade as a political fixer in Kyiv for Ukraine’s Russian-linked strongman Viktor Yanukovych, who fled to Moscow after being deposed in early 2014. With so many counts, pleas and convictions—on what Kremlin-friendly Fox News talkers like Sean Hannity and Tucker Carlson will try to convince you are charges that have nothing to do with Russia or collusion—it’s easy to forget that Manafort’s sketchy millions gained in Ukraine as a political consultant were at the very heart of his Virginia trial, and promise to loom large in his next trial too.

While Manafort’s long-term relationship with Oleg Deripaska, one of the top Russian oligarchs and a close associate of President Vladimir Putin, is no secret, what exactly Manafort’s ties to the Kremlin are remains a subject of tantalizing mystery. Here an indispensable role has been played by Konstantin Kilimnik, Manafort’s sidekick, translator, and go-to guy for just about everything in the former Soviet Union. That Kilimnik was once associated with Russian military intelligence or GRU has been known for years, in fact I reported it three months before the 2016 election—noting that, per Putin’s own dictum, Russia has no “former” intelligence officers.

Indeed, the realization that Candidate Trump’s campaign manager’s all-purpose fixer and Mini-Me was a Russian spy caused Manafort’s firing in August 2016, and the Special Counsel has looked closely at who Kilimnik actually is, concluding that he is a GRU operative. Barely masking his identity as “Person A” in court papers, Robert Mueller’s team fingered Kilimnik with the “assess[ment] that Person A has ties to Russian intelligence service and had such ties in 2016.”

To anyone versed in Russian espionage, Kilimnik is a thinly concealed Kremlin operative, a fact that leads unavoidably to grave counterintelligence concerns about Paul Manafort and the Trump campaign. Not least because Manafort included his Mini-Me in important campaign decisions regarding Russian interests, such as changing the GOP party platform on Ukraine in a direction pleasing to Moscow. Manafort’s two in-person meets with Kilimnik during the period he headed the president’s election campaign deserve scrutiny.

This is difficult because Kilimnik avoids the media and fled to Russia as the heat rose. His only interview, with Radio Free Europe in April, was rocky, with Kilimnik exploding when his photo was taken: “Don’t show that picture. If you show that picture I will kill you … GRU will kill you as well.” Nevertheless, yesterday a Russian outlet at last provided important details about Moscow’s mystery man. Proyekt (Project), an independent journalist collective, just exposed a lot about Kilimnik in its bombshell piece, “The Absolute Soviet Man.”

Proyekt finally got a decent photo of Kilimnik, and its portrayal of him is troubling, since it reveals that the “former” GRU man is living in luxury in an elite suburb of Moscow. Describing him as “probably the main clue in the Mueller investigation,” the exposé leaves no doubt that during his years by Manafort’s side, Kilimnik was working for Russia’s interests well ahead of anyone else’s. “He is absolutely a Soviet man, a patriot,” as one of Kilimnik’s friends memorably described him.

Although the Proyekt profile fleshes out what Kilimnik was doing in partnership with Manafort in Ukraine for several years, its real revelation is that the twosome worked in Kyrgyzstan for several years beginning in 2005, explicitly for Moscow and against Washington. Putin and his ruling clique didn’t like that the U.S. military had established a foothold in the former Soviet republic to support our war in Afghanistan. Our airbase at Manas, near the Kyrgyz capital of Bishkek, was considered an affront in Moscow, which views Central Asia as its own playground, and the Kremlin pushed hard for base closure, which eventually happened in 2014 (though local outcry curtailed U.S. operations there beginning in 2009).

Manafort and Kilimnik were lobbying for the closure of Manas too. “They went there,” meaning Kyrgyzstan, “to strengthen Russia’s position,” one of Manafort’s Kyiv colleagues told Proyekt. Running the Americans out of Manas was a fetish for Russia’s special services, and their propaganda for years agitated to evict the Pentagon from that Central Asian country. Paul Manafort was one of Moscow’s helpers in that effort (as was Rinat Akhmetshin, the onetime GRU affiliate turned Washington lobbyist, who was present on the Kremlin’s side at the infamous June 9, 2016 Trump Tower meeting).

This raises more troubling questions about Manafort’s relationship with Russia. To anyone versed in Chekist tradecraft, Manafort’s involvement alongside Kilimnik in a Kremlin-approved propaganda operation against the Pentagon means that Trump’s former campaign manager is unquestionably considered “their” man by Russian spies. In professional terms, the Kremlin considers Manafort to be at least a “trusted person,” that is someone who helps Moscow clandestinely, while the possibility that Putin’s intelligence services consider him to be their full-blown agent cannot be ruled out based on the evidence at hand.

That the political operative-turned-convicted felon who helped Donald Trump win the White House in 2016 is some sort of clandestine fixer for Moscow now seems certain. And he may be even worse than that. The possibility that Paul Manafort wound up at the heart of the Trump campaign not despite his deep Kremlin connections, rather because of them, is a matter that needs explanation urgently, and may hold the key to the entire mystery about the president’s secret relationship with Russia. 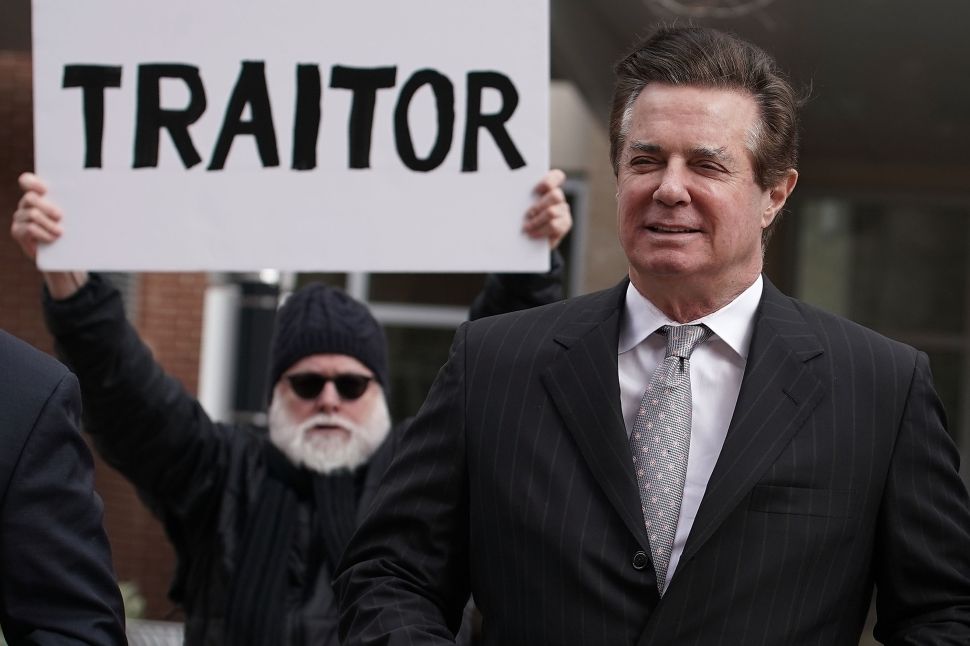