It’s amazing how little it takes these days to make some people happy: another app, a pair of shoes, a two-for-one special at Burger King, or a crappy Broadway musical like Pretty Woman. There isn’t a moment of wit or originality in it, but judging from size of the mobs pouring out of buses from New Jersey and into the Nederlander Theatre, this vulgar, noisy load of arrant nonsense is making a lot of people very happy indeed.

This is the one based on (copied from?) the popular 1990 movie with Richard Gere and Julia Roberts that turned her into a bona fide star. He played a rich, handsome New York businessman named Edward Lewis and she grinned her way through the role of a poor but pretty $100-a-night prostitute on Hollywood Boulevard named Vivian. After meeting cute (a stranger in town, he lost his way and paid her $300 to show him the way back to the Beverly Wilshire Hotel), he parades her in her trashy hooker clothes through the posh hotel lobby and for reasons that made sense only to the film’s writer, the late Garry Marshall, he offers her a business proposition she can’t refuse: spend the next week with him for a head-spinning markup of $3,000 so she can make him look good at formal dinners and business engagements while he buys, sells and disposes of a distressed company for a nasty profit.

The new musical version, which follows the movie to the letter including whole scenes of dialogue lifted intact from the sound track, makes no improvements and settles for cheap imitation. Although nothing ever happens to move the action in the direction of anything resembling an authentic professional Broadway experience, she makes him see the errors of his ways as he sings banal lyrics like “Freedom, freedom, I know it might sound strange; But I believe that I can change.” Nothing like a Hollywood hooker who talks like Holly Golightly to show a lonely, rigid, self-made millionaire his pants are too tight. What begins as a preposterous pickup turns to real fairy-tale affection. She loosens him up. He gives her a sense of value, self-confidence and self-respect. The result is a 2 ½ hour show with a five-minute plot.

Pretty Woman was never very good, but it had some charm. In this bloated musical version, the leads are played by Samantha Barks and Andy Karl. She sings loud and looks fetching in lingerie. He was wonderful in the ill-fated Rocky and the only good thing in the abysmal Groundhog Day. He has a singing voice as pleasant as his demeanor. Unfortunately, the cheesy pop-rock score by Bryan Adams and Jim Vallance gives him nothing important or memorable to sing.

There’s something very wrong with a musical that allows its stars to be easily upstaged by a libidinous hotel bellhop (Tommy Bracco) and a screeching whore (Orfeh) who wants to be a cop. From cardboard palm trees that light up like Christmas sparklers on Santa Monica Boulevard to garish clothes from a shopping spree on Rodeo Drive, David Rockwell’s sets and Gregg Barnes’ costumes look expensive, but everything is so tacky that you can’t see where the money was spent. Dancing and dining in luxury, attending polo matches for charity in Beverly Hills, Vivian becomes the Eliza Doolittle to Edward’s Henry Higgins, singing “I look around me and what do I see? I don’t belong here, this isn’t me” while he sums it up belting “You look beautiful tonight; Can’t remember ever seeing anything so right.”

Later, he is joined in a stupefying duet by a soprano singing an aria from La Traviata. This is the first (and hopefully, last) time you will ever hear a country-tinged pop tune upstaged by Giuseppe Verdi. Director-choreographer Jerry Mitchell, who has done better work elsewhere, has guided the entire enterprise with one pervading concept: There’s no song lyric so bad it can’t be improved by screaming it into cacophonous incoherence.

There is nothing in Pretty Woman that even begins to sound like Gershwin, but I left the theater humming “Who Cares?” 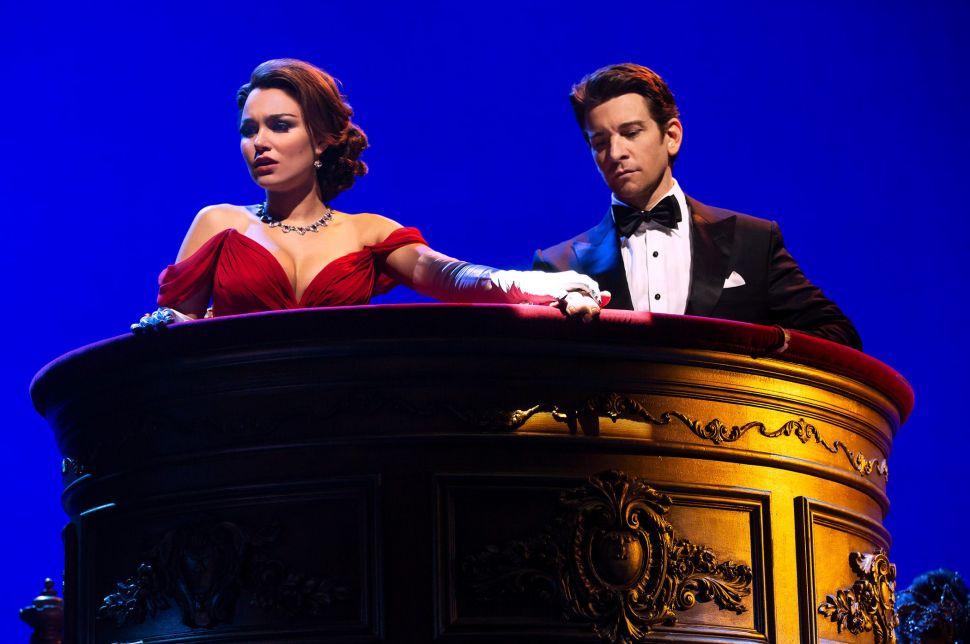