Less than one week prior to the national release of BlacKkKlansman, the President of the United States took to Twitter to call the basketball player and philanthropist LeBron James and Don Lemon, the African-American anchorman who interviewed him, dumb. Earlier that day, a columnist for New York Magazine willfully conflated out of context racial language that made him uncomfortable, with actual racism that kills people. By Sunday, it was reported that the historical marker commemorating the spot in Mississippi where Emmett Till’s body was found after he was lynched in 1955—a consistent target for gunfire since it was erected—was once again pierced by bullets.

These instances, and the many that will undoubtedly follow by week’s end, fit neatly into the ending of Spike Lee’s latest theatrical feature, a kitchen sink and kaleidoscopic study of cultural and institutional racism in America.

Most of the film takes place in 1979, the year Ron Stallworth, the former Colorado Springs police officer whose book forms the basis of this story and who is played in the movie by John David Washington, infiltrated the local chapter of the Ku Klux Klan with the help of a fellow officer (played by Adam Driver). But the story begins well before that—the opening shot is from 1939’s Gone With the Wind—and ends decades after, with the footage of a car slamming into people protesting a racist rally in Charlottesville, Virginia one year ago this coming weekend. Yes, this is a period movie; it’s just that the period is now, then, before and always.

To that end, BlacKkKlansman may be the most ambitious film in Lee’s oeuvre, which is truly saying something. At times the weight of that ambition—to simultaneously address so many root causes and constantly spin everything forward to show relevancy—threatens to overrun the movie. But in the end, the film is overflowing with so much joy and rage, such task and purpose, that it becomes easy to not only forgive its imperfections, but also find pleasure in them.

Indeed, some of the film’s strongest moments are those that don’t advance the plot at all, but rather shine a light on the culture that shapes the story like an invisible guiding hand.

Early on, Lee’s camera thrills to a barroom dance between Ron and Patrice (Spider-Man: Homecoming‘s Laura Harrier), the head of the Colorado College Black Student Union, to “Too Late To Turn Back Now” by Cornelius Brothers & Sister Rose. Later, they take a long stroll to discuss the merits of Ron O’Neal vs. Richard Roundtree, the kind of pop culture meandering we see in Richard Linklater movies but less frequently in films featuring black characters. We also see a group of Klansmen, including David Duke (a terrifically cast Topher Grace) laughing and talking back during a ribald screening of The Birth of a Nation, the 1915 film that repopularized the Klan while giving birth to the Hollywood blockbuster.

These scenes create the layers of the onion that surround and inform the central story, a dryly-comic police procedural about an earnest rookie cop leading an unlikely investigation into the KKK. (Members only ever refer to the Klan as the “Organization”). Not only do Washington and Driver play off each other wonderfully, it’s fascinating to watch the different ways the actors attempt to echo their interlocutors’ racist ideas during their investigation. In one scene, Driver’s character, who is Jewish but “passes”—you will never think of the idea of “passing” the same way after this movie—rebukes a Holocaust denier while undercover, saying it did happen and it was “beautiful.”

Lee bookends his story with speeches by a pair of icons; one lays bare the film’s mission, the other, its groundwork. Ron’s first undercover assignment is to infiltrate a speech promoting Black Power by one of that movement’s founders, Stokely Carmichael (Straight Outta Compton‘s Corey Hawkins), who had changed his name to Kwame Ture a decade earlier. Towards the end of the film, Harry Belafonte plays a visiting lecturer who describes in detail to black students what it was like to watch a friend get lynched some 60 years earlier. In both cases, Lee trains his cameras on the faces of those who are listening, and sometimes their visages float in blackness like guiding constellations.

This is who BlacKkKlansman is about and for: the people who will carry the men’s words forward and do something about it. In other words, it’s meant to be about and for all of us. 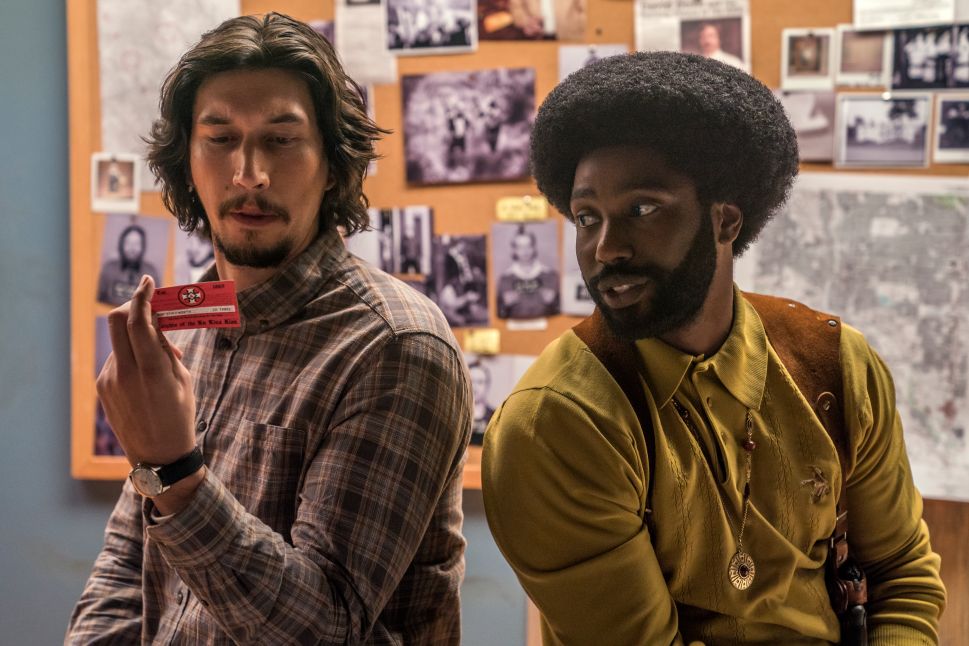