This morning, multiple outlets have reported that record label giant Sony had admitted in a Los Angeles superior court that three songs credited to Michael Jackson on his posthumous album Michael were in fact fakes.

Later today, however, Sony released a statement denying that it had conceded that the songs were frauds. “The hearing Tuesday was about whether the First Amendment protects Sony Music and the Estate, and there has been no ruling on the issue of whose voice is on the recordings,” the statement reads.

Confused? Of course you are! Don’t worry, we’re here to break it all down.

So how’d this mess get started, anyway?

This byzantine saga is the result of a class-action lawsuit filed in 2014 by Vera Serova, a fan of Jackson’s who bought the album Michael and became suspicious that the songs in question—“Monster,” “Keep Your Head Up” and “Breaking News”—weren’t sung by the iconic Smooth Criminal. Whether Serova’s hunch is correct is still up for debate, but this squabble about authenticity casts yet another fascinating shadow over Jackson’s pockmarked legacy.

Wait, which songs are you talking about? I’ve never heard of any of those.

That’s because they’re not that good. The three tracks were featured on a wildly best-selling Michael Jackson album, to be sure, but the reason why they became so instantly controversial is because they sounded suspicious from the jump. It’s not just Serova who smelled a rat: The production is boring and goofy (soooo not Michael!), and the vocals don’t sound that much like Michael either, though some of the tics (falsetto) are present and accounted for. Honestly, listen to just one of them, and you’ll understand where Serova is coming from.

Yeah, that’s the other thing. Who the hell is Vera Serova?

As far as we can tell, a law student at UCLA who really loves Michael Jackson, we guess? According to court documents, Serova hired “independent audio expert” Dr. George Papcun to evaluate the tracks when she realized there wasn’t much evidence that Jackson actually had anything to do with them. Papcun, a forensic audiologist, determined in a 41-page report that the vocals on the songs very likely did not belong to Jackson, and his assessment was peer-reviewed by a counsel and deemed “reasonable.”

Forensic audiology sounds cool! How does that work?

No clue, sorry. You should Google it, though.

O.K., fine. But back to Sony. If the songs are at least suspect, why didn’t someone figure this all out sooner?

Well, that’s the thing. The judges in the case are considering the possibility that Sony did figure out they had some frauds on their hands, and went ahead and lied about it anyway. Sony’s lawyer is claiming that the producers of the songs, Edward Cascio and James Porte, misled the record company by telling them the vocals were Jackson’s, which would mean that Sony did not willingly perpetuate false commercial speech. For years, Sony and its representatives have insisted the songs were genuine, claiming that Jackson recorded them in a basement studio that belonged to the Cascio family.

Sony also claimed that several of Jackson’s former producers and engineers could verify that the vocals were his, although Jackson’s family and many people who worked with him said this wasn’t true. So, Sony was either knowingly peddling faux Jackson songs, or they’d been catastrophically duped into doing so.

Got it. So what’s the deal with the case now?

People who attended Tuesday’s court hearing latched on to a statement by an attorney for Jackson’s estate that went something like “even if the vocals weren’t Jackson’s” and took that as proof that they were indeed phony. But sources insist that the attorney was just putting his two cents in. It’s sheer speculation! As it currently stands, Sony is arguing that they had the right to sell the songs as Jackson’s even if he wasn’t the singer, because this sort of messaging is protected under the First Amendment.

Um, what does freedom of speech have to do with it?

Right??!! Well, Sony’s notes state in part that the songs were presented this way: “This album contains nine previously unreleased vocal tracks performed by Michael Jackson. These tracks were recently completed using music from the original vocal tracks and music created by the credited producers.”

What exactly does “using music from the original vocal tracks” mean?

That’s a little unclear, but there’s nothing that explicitly says the songs use MJ’s own “ee-hees” and “sh’mons.” Maybe the vocals on them were just inspired by those original vocal tracks? At any rate, the judges in the case now have 90 days to decide on a ruling.

So wait, I’m pretty sure I bought that album. Am I part of this class-action suit? And if the songs are fake, when do I get my check? And is it big enough to pay off my mortgage?

Well, the 2014 lawsuit raises the question of whether people who bought the album or songs “are entitled to a refund, in whole or in part, of the purchase price of the album Michael and/or the songs.” So you could maybe get a type of refund. But don’t count on it.

Damn, that’s pretty crazy. What do you think of the songs? Michael or no?

Not Michael. And that’s what’s wild. Sony conveniently skirts the fact that even a casual Michael Jackson fan would have little trouble figuring out that the vocals on the songs in question don’t sound anything like him. The voice is a decent imitation, sure, but it feels obvious that a canny impersonation is at play here. Seems like the idea of a treasure trove of unreleased Jackson hits hitting the market in the wake of his death was too lucrative a prospect to pass up, even if much of the treasure trove didn’t actually exist.

So, then, who do people think sang the songs?

Some dude named Jason Malachi, though his manager denied it in 2011.

Sony is comprised of a real bunch of greaseballs, huh?

Maybe. The truth might not be plain yet, but their haste to capitalize on the tragic demise of one of the world’s most beloved, prolific musicians either blinded them to an obvious fraud or made it impossible for them to care about authenticity one way or the other when such a massive profit was at stake. It’s pretty bleak stuff.

Ugh, totally. By the way, what do you think the best Michael Jackson song is?

“Rock With You,” definitely.

Will you update this post if you find out anything new about this mind-boggling case?

Of course! We got you. 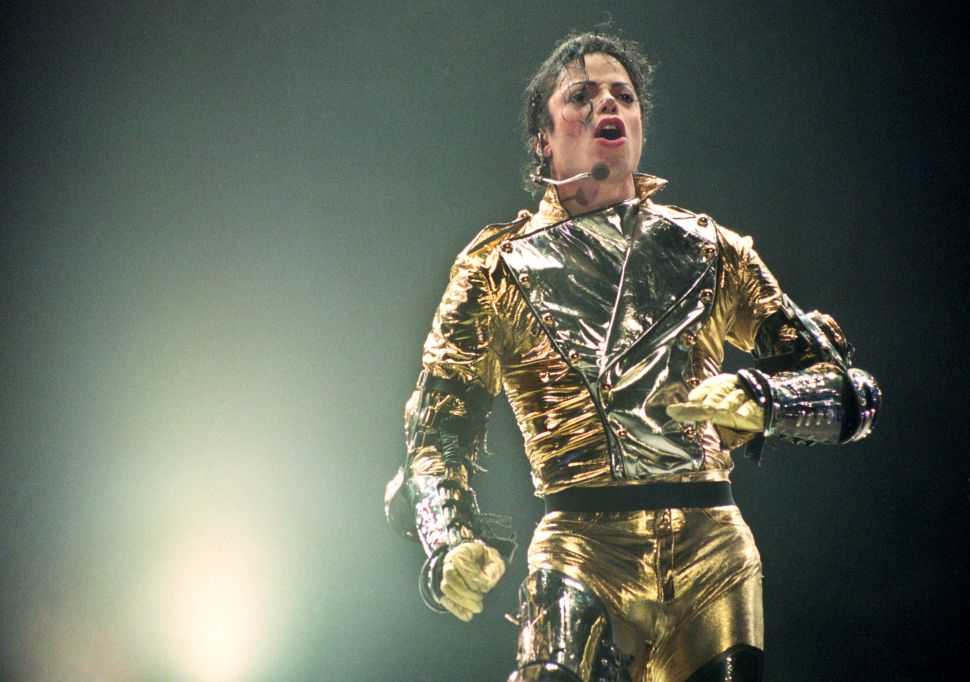