We’ve all heard the rumor. It’s been going around the conspiracy theory circuit for years. It’s a big one, right up there with “who really killed JFK?” and “where do all the other socks go?”

Is Subway blowing the smell of their bread onto the street in order to attract customers? Or even mastermind-ier perhaps, are they creating an entirely different manufactured smell of super-bread, and pumping THAT into the faces of unsuspecting potential customers?

It’s hard to walk past the sandwich chain without catching a whiff. That wonderful chemical aroma purrs into your nostrils the way a cat jumps on your bed early in the morning. You may not be ready for it. You may not want it there. But it’s looking for a little love, and how can you refuse?

The Subway conspiracy is one of those theories that just makes sense. The bread smell is better than the bread itself, so naturally the company would want to get it in front of as many people as possible. And if you believe that this Subway aroma is truly coming from the actual bread being baked, all they would really need to accomplish this is a decent-sized fan, right?

Even more likely than that blessedly simple explanation, however, Subway is building highly complicated vents and ducts that lead from their bread ovens to the door, so they can blast that “Bakery, by Yankee Candle” scent into the world.

At least, that’s what this whistleblower says.

If I’m right about my hunch, this could potentially set off a chain reaction that blows the lid off a number of other food conspiracies: Taco Bell is a major part of the Illuminati; New Coke was just a cover-up to save Coca-Cola’s cocaine empire; and (the one I’ve been pushing for years) the Hamburglar is actually Ronald McDonald’s estranged son.

Corporate bigwigs at Subway have denied allegations revolving around their sadness cologne in the past. But like any good conspiracy theorist, the “truth” (as big government calls it) does not convince me in the slightest, so I set out to ask the real workers, the sandwich artisans, what they think of it all.

I pulled up to the first Subway on my list and did not smell even a hint of yeast. Suspicious. Maybe they knew I was coming.

I walked in and talked to the worker behind the counter, Lema, who simply pointed to the bread oven, then the ceiling, and told me that the air “goes all the way up, through the roof.”

His point made sense, logically, given that there was an air vent that went straight through the ceiling, but I was not convinced. The bread smell was still inside the store, allegedly escaping from the oven when Lema opened the door—likely story.

I looked at my Subway map and went off again. The next person I talked to was named Yalo. He tried to explain to me how the oven works as they’re baking bread and cookies. “When you open, that’s the time the smell, you know, comes around. It’s not intentional.”

Cut the corporate crap, Yalo. I know what you are up to.

I continued trekking to the next restaurant and confronted Isuru—a devilishly handsome and charismatic man—about his baking practices. He laughed in my face and denied any funny business, but did admit: “According to headquarters, we were told to bake breads and cookies first thing in the morning because when the customers walk in, in the morning, you know, that should be the first smell they get. It creates a very good impression.”

I was getting closer. I could feel it. Isuru had almost cracked. Subway wants people to get a good whiff of that sweet siren’s song of a scent, but I still could not get a proper confession.

The next worker I talked to claimed he had never even heard of the theory, but that he would do some research on it. Strangely, all the others had pleaded ignorance too.

I decided to give it one more go and walked into the Subway by my house, asking my hard hitting questions to the worker on his cigarette break out front. Maybe, if he was not in the store, he’d be more comfortable giving a truthful answer. The guy standing next to him, a friend who claimed his name was Kamran, cut in and answered instead.

“Do you smell something coming from here now, standing right in front of Subway? Are you smelling anything?”

I had to admit that I did not—all the Subways had been suspiciously clean in the middle of the day. Maybe there was something to the baking in the morning excuse.

“Great, so, that is a rumor,” Kamran said, laughing in my face.

I went home dejectedly to review my notes. There were two common themes:

I felt like a lost caravan, wandering around in the desert, waiting for death. Until, a brilliant observation miraculously jumped out at me, the way shimmering pools of sometimes form in the heat.

There is only one conclusion, and if you think it’s that I should be doing better things with my time than thinking up and investigating fast food conspiracy theories, then you’re sorely mistaken.

Subway is clearly brainwashing their employees so they have no idea what’s really going on. There is some noxious chemical in the bread that makes it impossible for them to tell that they’re being manipulated and lied to. It’s a canard of epic proportions. 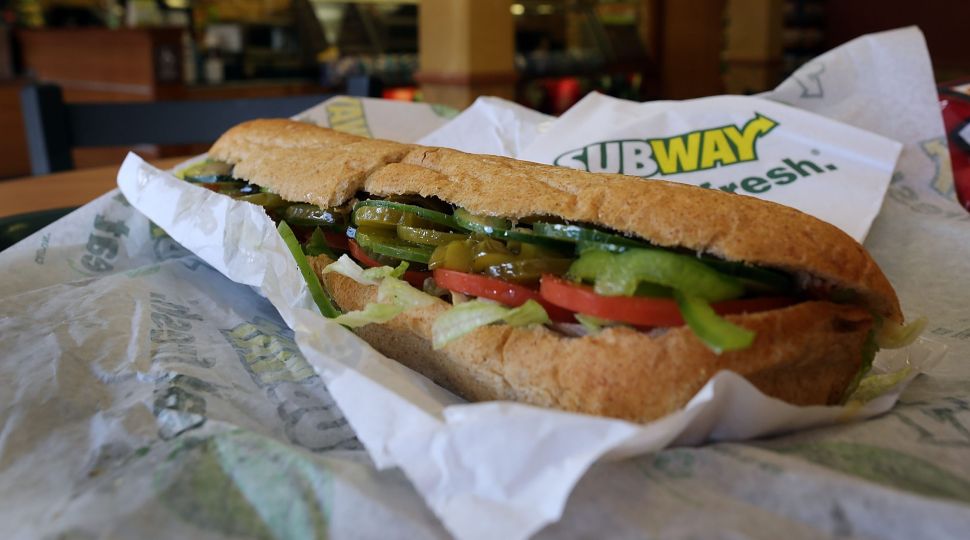