In the first few minutes of The Happytime Murders, a puppet hails a cab in downtown L.A. that is taken out from under him by a human with a slick haircut. They exchange nasty words. “Fuck you,” the puppet yells; the audience titters, this being one of the first times they have ever witnessed a fuzzy furry thing saying a curse word.

That’s about as good as it gets in this movie: every subsequent joke is a variation of that one. Only instead of just cursing, the puppets go to sex shops to engage in S&M, snort sugar like it’s heroin, ejaculate silly string during sex, forget to wear underpants while being interrogated and the list goes on.

The filmmakers seem to think that flouting what is considered traditionally acceptable behavior for a puppet is enough to sustain a feature comedy. It isn’t. This type of humor worked well in 2004’s Team America: World Police, a far superior film, chiefly because it was in service of a point of view and truly subversive ideas. The Happytime Murders, on the other hand, fatally confuses crassness with subversion.

Which brings us to the second part of the joke, that puppets are openly and cruelly discriminated against. We learn over the course of the story that puppets are banned from becoming police officers, considered addle-brained minstrels that can easily be taken advantage of in contract negotiations, and openly called their version of a racial epithet: “sock.”

Is the film making a comment about humanity’s inherent cruelty? Is it making light of the concerns of people who face discrimination? Or does it just think racism, given the right goofy context, is funny? By all appearances, the filmmakers—who include director and Muppet scion Brian Henson, who has been working with puppets since he was in high school—really don’t know either, and so the idea lands with a thud. Nothing seems thought through here beyond, “Let’s do a gross R-rated cop comedy with puppets and Melissa McCarthy and maybe we can siphon off some late summer money.”

That’s a shame: there was real promise in the conceit. Phil Phillips, a hard-boiled puppet P.I. with a past (played with genuine world weariness by longtime Muppets performer Bill Barretta, who currently performs Rowlf the Dog and the Swedish Chef), teams with an unhinged L.A. cop (McCarthy) to catch whomever is murdering the cast of the sitcom The Happytime Gang. (Again, this Raymond Chandler in the world of kiddie entertainment concept was much more adeptly handled in 1998’s Who Framed Roger Rabbit?)

Phil is the only puppet character that registers at all, which is one of the countless ways that the movies falls short of the legacy it is meant to expand and subvert. The female humans in the film, including McCarthy, her frequent collaborator Maya Rudolph and Elizabeth Banks fare much better, though the latter two are chronically underutilized.

As for McCarthy, her ability to turn the blinders on to substandard material and just go for it is legendary. But to what end? As with her other recent films, McCarthy, who along with her husband Ben Falcone, serves as a producer, is simply returning to territory that she already conquered, in this case doing a slight variation of the uncouth cop she played in 2013’s The Heat.

Along with consistently funny jokes and something to say, The Happytime Murders is missing a sense of joy, or really any emotion at all. One would have hoped that Henson would have used the film to at least side-eye the corporatized product into which Disney has morphed his father’s creations, but he doesn’t.

Over the closing credits, the film offers some making-of segments. Not only does this footage illustrate how much puppet technology has changed in recent years, but also it shows the performers and other filmmakers having a good time. Not one iota of that fun makes it up on the big screen.

Perhaps that’s because they were the lucky ones. They just had to make the movie; they didn’t have to watch it. 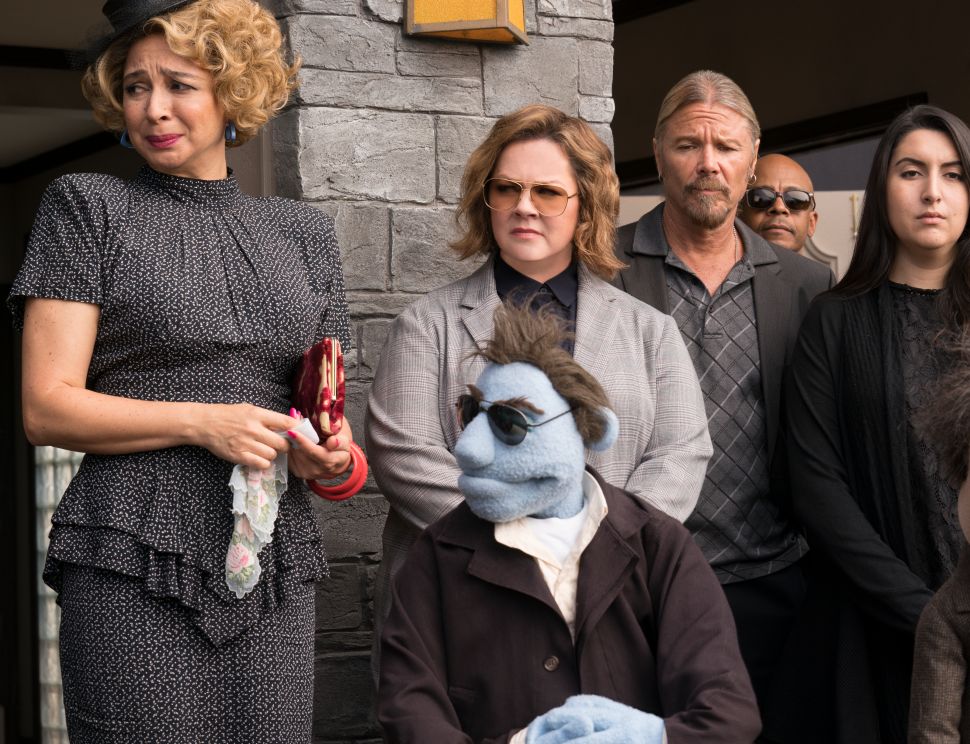