Back at Poughkeepsie Middle School, in September of my eighth grade year, the administration was trying something new. They would play music during our lunch period, and we, the students, often got to pick what we listened to. Needless to say, it was a short-lived experiment once the faculty realized our love for profanity-laden rap. But before they pulled the cord, our woodshop teacher, Mr. Baxter—the whitest man I’d ever seen—brought in The Miseducation of Lauryn Hill and played it in the cafeteria. I think he even made a small speech about how important he thought this album was or something, but as soon as the opening bars of “Lost Ones” hit, we all went crazy.

This was my first time hearing the album all the way through because, as an unemployed 12-year-old with a mother who didn’t believe in an “allowance,” I didn’t have the coins to buy the CD. But any and every time the music video for “Doo Wop (That Thing)” came on MTV, BET or VH1, I watched it with an intense fervor. This is it, I thought at the time. This is what we have been waiting for. Lauryn Hill was the sound and the face of the future.

Twenty years later, as tributes and think pieces roll in commemorating its anniversary, The Miseducation of Lauryn Hill remains a landmark, a touchstone and a memorial to what could have been. It seemed like it was a classic as soon as it came out the gates, breaking records and enrapturing critics and audiences from all walks of life. I remember that most solipsistic of pop divas, Madonna, then enjoying her own critical and commercial triumph with Ray of Light, being asked what she was listening to at the time, and she replied by singing the opening lines to “Doo Wop (That Thing)”: “Girls, you know you better watch out.” Because Lauryn Hill was coming for all our crowns.

So undeniable was L-Boogie’s Miseducation that even the Grammys—not really known for lauding women, let alone black women, or, for that matter, hip-hop—bestowed Hill with five trophies, including Album of the Year. You can still count the number of black women who have won Album of the Year on one hand: Natalie Cole for Unforgettable; Whitney Houston for The Bodyguard soundtrack (another pop-culture juggernaut, but really a collaborative effort on which Houston appeared on only six of its 13 tracks); and The Miseducation of Lauryn Hill. There is barely a “greatest” music list for which it is eligible that The Miseducation does not appear. And over the course of two decades, the legacy of Hill’s one and only solo studio album has only grown.

Nicki Minaj, one of the many artists who cite Hill as an influence, raps on her 2009 mixtape, Beam Me Up Scotty: “But when it rains, it pours for real / Def Jam said I’m no Lauryn Hill / Can’t rap and sing on the same CD / The public won’t get it, they got A.D.D.” Minaj’s old label mate Drake sampled “Doo Wop (That Thing)” for his 2014 track, “Draft Day,” and more famously, “Ex-Factor” for his ubiquitous, chart-toppng 2018 bop “Nice for What.” Cardi B also sampled it for this year’s “Be Careful.” But Hill’s reach extends far beyond hip-hop—in 2015, the Library of Congress added The Miseducation to its National Recording Registry with other recordings it deemed “culturally, historically or aesthetically important” and that “inform or reflect life in the United States.”

It’s Hill’s reflection of life in America that makes the universal acclaim it received so extraordinary, but also what made it possible to begin with. As the treatment of Anita Hill, and the fact that Stacey Abrams is poised to make history as the first female African-American governor in history—in 2018!—prove, this country rarely cares about what black women have to say. But the experience of black women in America is, in many ways, the story of America itself. The African-American race was predicated on their love, and in many cases, their violation. So when Lauryn Hill raps about being “more powerful than two Cleopatras” and bombing “graffiti on the tomb of Nefertiti,” and then taking MCs “to the Serengeti” with rhymes “heavy like the mind of” Betty Shabazz on “Everything Is Everything,” or when she’s denouncing “hair weaves like Europeans” on the number 1 hit “Doo Wop (That Thing),” she is placing her blackness front and center, making it unavoidable—but because of her undeniable talent, and the power of pop music, it’s also incredibly palatable.

Even at its preachiest, the vision of The Miseducation of Lauryn Hill is bigger than any one concept, identity or person. Hill covers love in all its incarnations, delivering one of the most beautiful songs about motherhood with “To Zion.” She sings about being young, being optimistic and being overwhelmed. She sings about wanting a better future for herself and for all of us. Because it spoke so eloquently, so emotionally, so passionately about life itself, The Miseducation of Lauryn Hill was able to transcend the traditional boundaries of its genre and the restrictions placed upon its creator. It was, and still is, everything.

I didn’t end up buying my very own copy of The Miseducation until a year after Mr. Baxter played it that September lunch period in eighth grade. I remember the exact day I got it: November 5, 1999. It was my 14th birthday, though that was overshadowed by the funeral of my mother, who had died just days before after a short and unchecked battle with pneumonia.

Following the funeral, I sat alone in my aunt’s bedroom, quietly wishing myself a happy birthday, when my cousins surprised me with what is still probably my favorite birthday gift: some CDs from the Poughkeepsie Galleria Mall. One of them was The Miseducation of Lauryn Hill. It was a light in all the darkness of the day, and I listened to it endlessly, singing and rapping along to it, memorizing it from beginning to end, internalizing it.

My mother and I had shared the single bedroom in our small apartment on Main Street, and now it was mine alone, though her presence still lingered. In that room, I would sit on my little twin bed, as I couldn’t bear to disturb her larger, more comfortable queen-size bed that had become a monument to her death, and dream to The Miseducation. I was free and happy and no longer a product of my circumstances as I sang along to “To Zion,” an ode from a mother to a child that I adopted as my own. When the song crescendoed I would sing at the top of my lungs, in my head matching Ms. Hill note for note: “MY JOY! MY JOY! MY JOY! MYYYYYYYYYYY JOY!” and the tears would well up in my eyes.

It was pure joy. 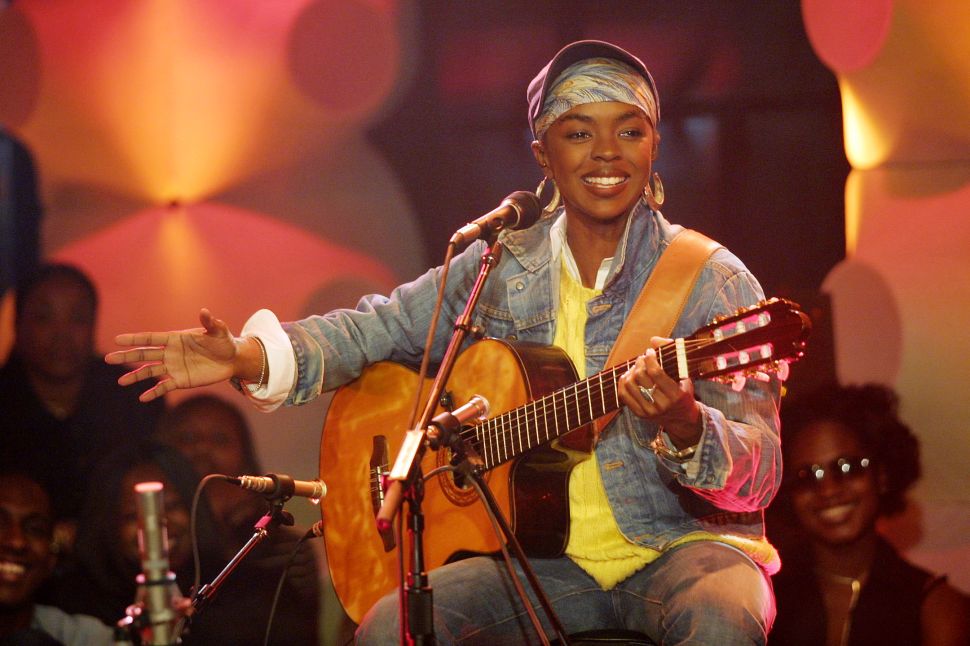