Tucker Carlson loves to bash the media. Some of his rants are relatively harmless, like when he complains about CNN always playing at the airport.

It’s his claims about the media encouraging violence that raise the most hackles, however. But that doesn’t stop him from spewing anti-journalism bile on Fox News.

Carlson’s latest rant was last night, in the aftermath of the failed “Unite the Right” protest in Washington, D.C. over the weekend.

The Fox host made the bold claim that white supremacist hate groups don’t exist in America,

“I’m not familiar with any large group that believes that, and I never run into anyone who thinks that,” he said.

Carlson’s guest Mark Steyn, a British-Canadian conservative who thinks Islam will take over Europe (and was a theater critic earlier in life), agreed.

“There are 17 white supremacists in America living in their parents’ basements,” he said. “They’re dweeby pajama boys.”

Steyn claimed that “white supremacist” had become shorthand for anyone who’s “ever so teensy weensily right of center.”

Both men agreed that the real problem was “antifa.” The people who claim to be against fascism are actually encouraging all the violence, they said.

“They’re incapable of making any argument,” Steyn said. “They only punch you in the face, blow things up and smash stuff.”

Of course, the duo said the media was at fault for this.

“Someone is gonna get killed and the media will play a large part in that,” Steyn said.

The reason for this, he argued, was that the media had glamorized people like Kathy Griffin after she posed with President Donald Trump’s severed head.

“She’s not gonna actually sever the head of the president, that’s a bit too much hard work for her,” Steyn said. “But she’s turned on by it.”

He also made the ludicrous claim that antifa was on the “same continuum” as the Charlie Hebdo killers.

In January 2015, two gunmen attacked the French magazine’s headquarters in Paris and killed 12 people, including the editor-in-chief, two police officers and several cartoonists. The assailants said they wanted to punish Charlie Hebdo for its satirical depictions of Muhammad.

Steyn said the murdered journalists were “witty, amusing, intelligent people killed by guys who don’t know anything except how to kick the door down and kill you.”

“These guys in antifa are the same thing,” Steyn said. “They can’t make an argument. They’re morons. But they are morons who have the scent of blood in their nostrils.”

There are obviously a lot of problems with this line of thought. Equating journalists murdered for doing their jobs with slightly inconvenienced far-right protesters is an equivalence so false it boggles the mind.

By the same token, religious zealots who commit murder in the name of their god are not remotely comparable to anti-racist activists.

Antifa can definitely go overboard with some of its tactics—for example, protesters attacked journalists and cops this weekend. But none of them have committed militant acts of terrorism like mass shootings.

Carlson and Steyn concluded with a ham-fisted callback to Sarah Huckabee Sanders’ Red Hen saga, worrying that antifa would attack an “undersecretary in an Applebees.”

This shouldn’t have to be said, but a slightly uncomfortable meal is not remotely comparable to a terror attack that kills multiple members of the media.

Even by Carlson’s usual low standards, that argument is pretty desperate. 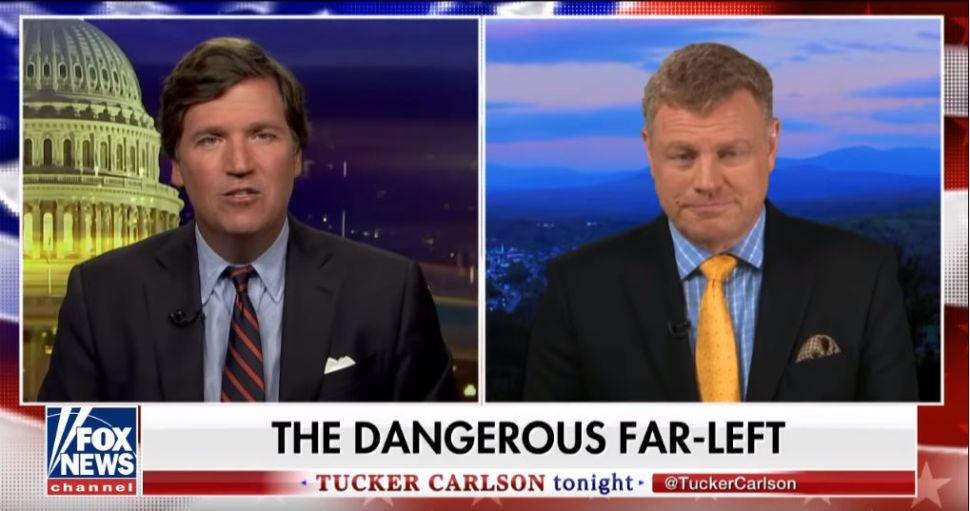