There’s still six months to go until Oscar night, but a handful of favorites have already emerged in the crowded field, from Ryan Gosling’s First Man to Bradley Cooper and Lady Gaga in A Star Is Born. Both films—although I haven’t yet seen them, or any other film released this year—are, I think it’s safe to say, absolute garbage compared to the dramatic arc of a video just posted on Twitter by the Washington, D.C. police.

We have identified the suspect involved in this incident that occurred in the 1800 block of Bladensburg Road, NE on 8/30.

The incident was captured on a cell phone video and can be seen below. This case remains under investigation. #DCPolice #HereToHelp pic.twitter.com/wjti63DycR

The video, according to a report of the incident provided by the D.C. police, picks up after a traffic accident on Thursday evening involving the star of the film—a Woman Who Is Very Much Not Having This Shit Today.

We open on a shot from inside the perspective of a Greyhound bus driver’s seat, which, as we’ll later learn, is an important piece of foreshadowing. Our antagonist, a stylish young woman, can be partially seen stalking below the bus window, her head briefly visible, like an ominous shark’s fin in the distance.

“She’s going to fucking jail, this is a federal crime,” an unseen voice is heard saying as the camera pans toward a clearer shot of the woman approaching a bystander on the median—perhaps the other party to the accident—and exchanges words. The second woman seems distressed and confused, a feeling viewers of the video will soon share.

As they speak, we learn the WWIVMNHTST appears to be wielding a weapon of some sort, and the tension of the scene comes into clearer focus. Without warning, she strikes, leveling successive thuds against the bus window with a tire jack. This comes after she’d already struck the bus with a baseball bat, the police report says.

Honking horns in the background introduce the viewer to the wider setting of the video, as the camera pans around to the woman’s car, where she casually tosses the tire jack into the trunk. Curiously, a man in a blue shirt appears as if out of nowhere standing in front of her car.

“Are you fucking kidding me?” the narrator exclaims, just as things get really weird.

The woman attempts to drive off, striking the man in the blue shirt, who rolls awkwardly, almost performatively, up onto the hood of the car. The voices in the background echo the viewers’ thoughts: “Oh shit.” “Yoooo.”

The video soon transitions into first person POV shaky cam footage, as a man holding the camera runs to the aid of the man on the hood.

“Leave him alone. What are you doing?” he asks the woman. “That’s a[n] old man,” he tells her, trying to intervene between the two.

And then things get downright absurdist. The man in the blue shirt falls into frame onto the hood of the car of his own volition, all the while holding his phone to his ear, seemingly on purpose. He has a powerfully unnerving affect, almost as if he’s drugged, or concussed.

What, you may be asking at this point, is this dude up to? Is he trying to get an insurance payout? Is he mentally unwell? Is he trying to perform history’s most ineffective citizen’s arrest?

Panning back, the camera follows the car as it attempts to drive off again, this time hitting the man solidly. He bounces off the hood and, apparently still unhurt, decides to take a little rest. Police sirens can be heard approaching in the background, and our antagonist comes out of the car again to confront the man.

Bystanders attempt to convince the man—whose shirt we can now see has a Greyhound logo on it, making him the driver of the bus—to chill out but he refuses.

We switch genres here yet again, into an action sequence, where the man, for some insane reason, attempts to drop a flying elbow on the hood of a swiftly approaching vehicle. The CGI here is a bit subpar, as he flops around awkwardly like a poorly rendered non-player character in a video game. Needless to say, it does not go as planned, and his body is hurled aside onto the street where he, naturally, decides to take another rest.

“Why would you jump in front of a car like that?” a shocked bystander asks the bus driver rushing to his aid. He’s now splayed out eerily calm in the middle of the street, an eerie look of satisfaction in his eyes.

“She was gonna get away with it,” he says as the police arrive. 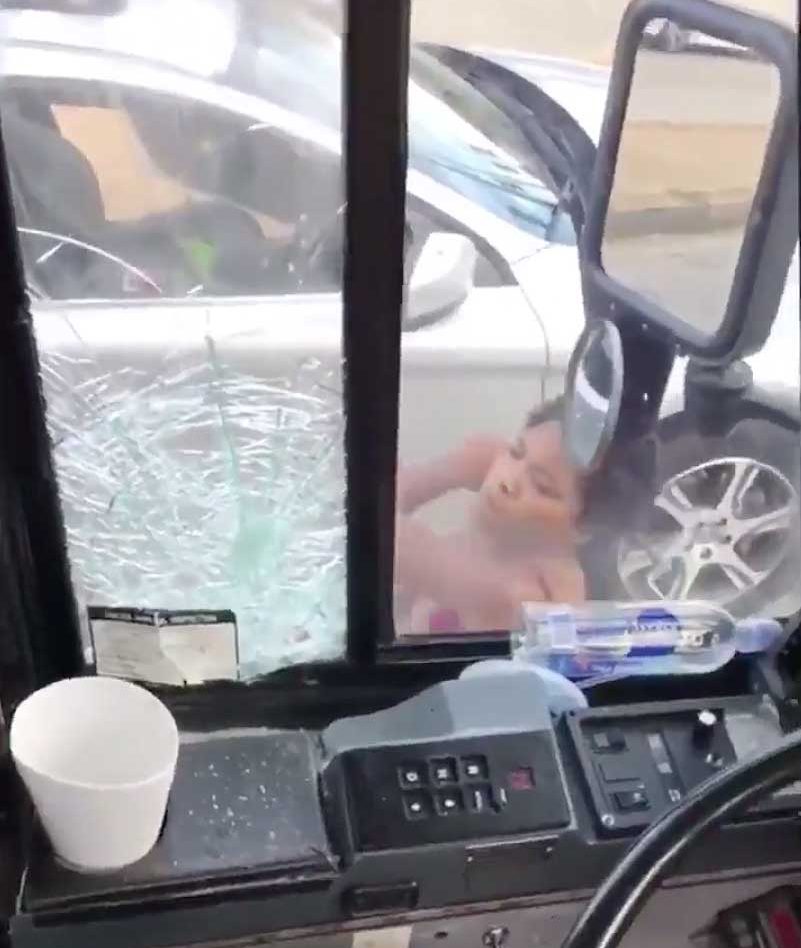