Nothing brings out art-world cynicism like a museum crossing paths with celebrity. It’s understandable. Mounting a show dedicated to a director like Tim Burton or hosting a retrospective of a superstar musician like Björk—as the Museum of Modern Art has in recent years—can offer visceral-yet-lightweight peaks inside their process at best and, at worst, come across as naked ploys to grease admissions. So you’ll be excused if you read with nose upturned the announcement, earlier this year, that Vienna’s Kunsthistorisches Museum gave filmmaker Wes Anderson and his partner, designer and author Juman Malouf, free rein of its collections to curate an exhibition. But in this instance of star power infiltration, snootiness might be unwarranted.

Opening November 6 and running through April 28, 2019, the show’s title, “Spitzmaus Mummy in a Coffin and Other Treasures,” sounds like a book that Malouf would have designed for one of Anderson’s films. It’s the third in a series of exhibitions with name-brand curation at the Kunsthistorisches Museum, with Anderson and Malouf following Ed Ruscha’s 2012 show and Edmund de Waal’s 2016 program. As of mid-August, the museum has not divulged what “Spitzmaus Mummy in a Coffin” will look like, with curator Jasper Sharp saying only that it’s “a very special exhibition, which will be quite unlike anything we’ve ever done before.” We do, however, know the scope—and it’s vast. Anderson and Malouf were allowed to select objects from all 14 of its collections, from old master paintings and Egyptian antiquities to the Imperial Treasury, Coin Cabinet and crown jewels. “We have given Wes and Juman a very special, but somewhat overwhelming invitation,” Sharp added.

In the hands of any curator that sounds like an almost impossible task, and there’s every reason to be skeptical of novices turning their hands to exhibition making. But Anderson brings a unique mindset to the project. His films are so meticulously designed and produced, you could look them as triumphs of curation as much as filmmaking. Every object, every costume, every character is staged and placed just so to create his singular, collage-like cinematic dioramas. To see how that translates into a real-world exhibition—or doesn’t—makes “Spitzmaus Mummy in a Coffin” an event you simply can’t ignore.

Since we don’t know what Anderson and Malouf have selected for their show, we’re left to imagine what might appear in it. Here are 10 items, pulled from the KHM collections, that speak to Anderson’s films, storytelling and cinematic preoccupations and, hopefully, make it into the show.

Anderson brings a theatricality to each of his films—sometimes literally, be it Max Fischer’s gonzo stage adaptations of blockbuster movies in Rushmore (1998) or just the tour of Steve Zissou’s boat in The Life Aquatic (2004). So naturally we’d expect to find some items in Spitzmaus Mummy in a Coffin drawn from KHM’s Theatermuseum. This set from an early 20th century production of German playwright Friedrich Schiller’s 1782 work Die Verschwörung des Fiesco zu Genua, designed by Heinrich Lefler, seems a natural: a courtyard surrounded by an opulent, yet vaguely shaggy two-story manse with enough windows to inspire hijinks and conceal intrigue. It would be so at home in a Wes Anderson film, it almost feels like we’ve seen it before.

While we’re on the subject of mood, this 17th century copper painting from German Baroque artist Wolfgang Heimbach captures a kind of internal vibe present in most of Anderson’s work: the elegant dinner party illuminated by candlelight and tapestries convey an erudite elegance that seems poised to be disrupted by drama, menace or shenanigans. Cineastes might look at this work and be more reminded of Stanley Kubrick’s Barry Lyndon (1975) than The Royal Tenenbaums (2001), but given that Anderson and Kubrick share a similar exactitude and biting sensibility it’s all the more reason this work should be included in the show.

We maybe don’t even have to explain this one past the leopard skin shoulder throw. This uniform, and the very fact the exhibition is taking place in Austria, make you immediately conjure up images from The Grand Budapest Hotel (2014). The film’s script, tone, and structure were inspired by Austrian writer Stefan Zweig, who fled his beloved Vienna after Hitler seized power and ultimately committed suicide in Brazil, haunted by the loss of his city and identity. As you might expect, there’s a mountain of material in the museums’ holdings that call to mind both Anderson’s film and the Zweig’s stolen world, such as the elegantly simple gala uniform from 1910 and the gorgeous platinum, diamond and ruby encrusted homage and reminder from 1908. But perhaps the most Anderosonian of the bunch is this Royal Hungarian Bodyguard uniform from the early 1900s. It’s both militaristic and just ostentatious enough to be a character statement.

Love him or hate him, it’s undeniable that one of Anderson’s strengths as a storyteller is creating memorable, multi-faceted characters. A personal favorite is Bill Murray’s morose, hellbent-on-revenge Jacques Cousteau-esque Steve Zissou. He’s a deep, bristly character overflowing with pathos and individuality, and that manifests in his costumes (sky blue wetsuits, fire-engine red wool caps) and collection of gadgets, doodads and trophies. And on that score, this coral-hilted German saber owned by Archduke Ferdinand II would fit right in on Zissou’s ship, the Belafonte.

Another of Anderson’s indelible characters is Rushmore’s Max Fischer, partly because of his innocent overachievement—he stages plays, leads clubs and petitions to make Latin a required subject not for his college resume but because he loves Rushmore Academy (and, in the case of Latin, the new teacher, Miss Cross). Given his craftiness and penchant for wearing pins (Punctuality and Perfect Attendance), it’s totally reasonable to imagine Max minting special coins to hand out to members of his various societies. And these three silver examples from the museum’s collection—all vaguely academic and strangely whimsical—could serve as ideal points of inspiration.

Embellishments like Max’s pins, Margot Tenenbaum’s wooden finger or Francis’ bandages in The Darjeeling Limited (2007) are an important aspect of Anderson’s characters, serving as symbols of outward anxieties and inner turmoil. In the stop-motion animated Isle of Dogs (2018), those objects take on greater significance in a film with a smothering air of political intrigue and autocratic rule as indicators of a person’s place as pro- or anti-dog. This 16th century pendant of a lively and agile white dog, made by the workshop of Innsbrucker Hofglashütte, would not be out-of-place in Megasaki—especially around the neck of staunch canine ally Tracy Walker (voiced by Greta Gerwig).

For a filmmaker as fastidious about production design as Anderson is, it’s unsurprising that his characters are given an item or object that encapsulates their persona, such as Suzy’s pilfered library books in Moonrise Kingdom (2012)—all of them are sci-fi, and all of them speak to her yearning to ditch her humdrum life for something more adventurous. She gets that when she runs off with Sam (Jared Gilman), a precocious Khaki Scout frustrated by the middlebrow personalities and spirit of his troop. An old soul, Sam has an earthy, utilitarian sensibility mirrored in his no-nonsense toolkit of survival instruments (and practical skills). This late-16th-century Spanish sundial designed by Juan Cocart might be silver and gold, but it’s a tool Sam would love out in the wilds of New England.

Lidded cup of rhinoceros horn (circa 1650)

This exquisite lidded cup, made in Germany out of rhinoceros horn, doesn’t necessarily speak to some broader theme or concern in Anderson’s work as much as it calls to mind the geographical and emotional spirit of one of his least-loved movies, The Darjeeling Limited. Set in India, it follows three brothers—Jason Schwartzman, Owen Wilson, and Adrien Brody—as they try to reconnect in the wake of their father’s death (and other separate, personal tragedies). It’s a quiet, meditative, and somewhat interior film, more concerned with examining what’s under the hood when it comes to relationships between family, cultures, and generations than outward expressions of Andersonian whimsy. That’s conveyed somewhat in this cup, but it’s true value to Anderson’s exhibit would be as an evocation of the mood and place of the film.

The Royal Tenenbaums is the Anderson film many viewers—hardcore fan and casual observer alike—point to as his best. It’s certainly one of his most ambitious, boasting a Robert Altman-esque cast and structure to track the rise, fall and readjustment of a once-titanic New York creative family. It’s also chockablock with the kind of inventiveness, creativity, and quirkiness that would come to define Anderson’s filmography. One of the standouts in that regard is the relationship between Royal Tenenbaum (Gene Hackman) and his confidant Pagoda (Kumar Pallana), who met each other after Royal was knifed in a bazaar in Calcutta—never mind it was Pagoda who did the knifing. It’s a twist that resurfaces later in the film, and when this 16th century work by the Italian painter Titian (a.k.a Tiziano Vecellio) popped up while scrolling through the KHM’s collection it was impossible not to see it as analogous to one of Royal and Pagoda’s many run ins.

Look, a circus bear aiming a shotgun might be the most Wes Anderson image to never appear in one of his movies. It has everything: animals, weapons, whimsy, danger and just enough absurdity to be both funny and discomforting. If this 16th century jewel-encrusted German sculpture created by Gregor Bair, Valentin Drausch, and Heinrich Wagner isn’t in “Spitzmaus Mummy in a Coffin and Other Treasures” the exhibition should rightly be considered a failure. 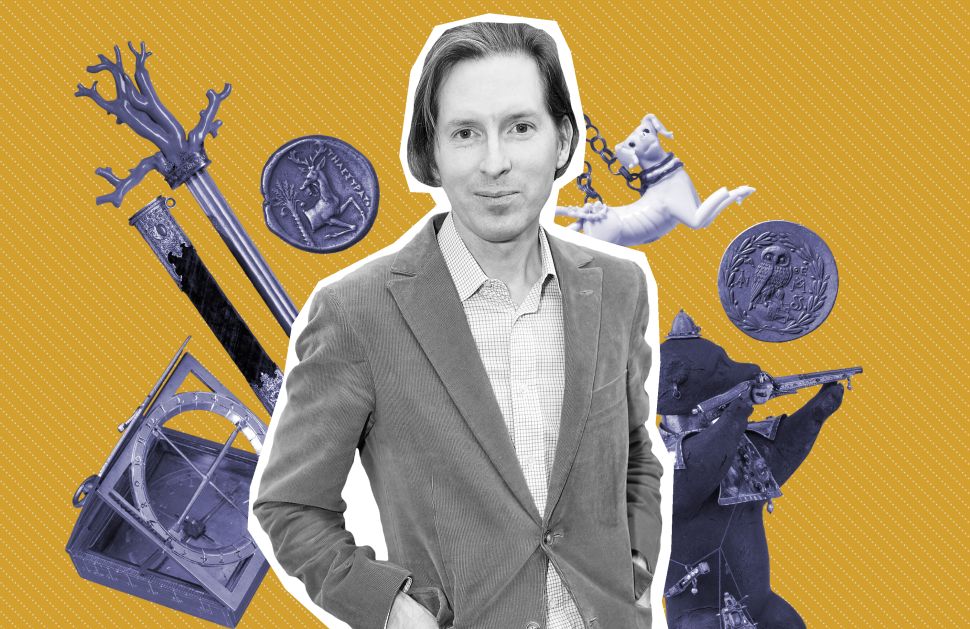