Bachelor in Paradise is very explicitly in the business of fostering convoluted relationship drama that updates so constantly it recalls a Mozart opera on amphetamines. Within the course of a single episode, a cast member could be kissing one person on the beach in the morning and then be head over heels with a stranger by twilight.

It’s dizzying stuff, and Season 5 is particularly hard to follow given that the cast is humungous, amorphous and ever-growing week by week as new people are added to the mix. With all this in mind, what follows is an attempt to sum up the status of every BiP relationship as it currently stands.

As the season continues, this post will be updated regularly to indicate who in the core cast has gotten dumped, eliminated or (god forbid) engaged. It’s gonna be a bumpy ride, so try to keep up!

COLTON AND TIA
Status: These two have been a match made in hell since the beginning of the season, when it was confirmed that Colton and Tia had indeed dated briefly in the past and that Colton was far from being over his ex, Becca Kufrin. Tia is half-heartedly talking to Chris, but is clearly still infatuated with Colton. Colton, however, is just not that into her, which he’s told her clearly multiple times. Regardless, Tia can’t give up the ghost and continues to pursue him. A promo for tonight’s episode shows her weeping when a new arrival asks Colton out, so we’re sure that’ll be a disaster.

Are they in this for the long haul? That’s gonna be a no from us, dog.

Does it seem like they’ve banged each other? Given Tia’s level of obsession, we’re going to say yes, but our sense is that it happened a while ago.

TIA AND CHRIS
Status: Chris is in hot with Tia right now, as he should be! Chris has made a huge deal out of harassing Colton for not knowing what he wants, which turns out to be a clear case of projection when Chris tells Tia she can trust him and then immediately makes out with Krystal. The most recent episode ended with Tia sternly telling Chris that they need to talk, so we’d guess he’s about to get chewed out.

Are they in this for the long haul? Hell no.

Does it seem like they’ve banged each other? A, gross. B, absolutely not.

CHRIS AND KRYSTAL
Status: These two made out on a couch after Chris told Krystal he’d never kissed a blonde before.

Are they in this for the long haul? Honestly maybe, since they both suck.

Does it seem like they’ve banged each other? It’s only a matter of time.

KRYSTAL AND KENNY
Status: These two went on a great first date at a Mexican wrestling match and seemed to really hit it off, but when Kenny put the moves on Krystal at a rose-petal-sprinkled beach date, she revealed that she only saw him as a friend. The look on Kenny’s face when she divulged this gave us so much secondhand embarrassment. He looked like a 5-year-old who just had his toy truck taken away. Sad!

Are they in this for the long haul? Nope. Krystal is apparently into Chris now!

Does it seem like they’ve banged each other? Nah.

JOHN AND JUBILEE
Status: These two immediately hit it off while talking about race and computer programming, after which they shared a great zip-lining date capped off with margaritas. Jubilee and John aren’t the show’s biggest personalities, but there seemed to be a genuine spark between them and it’ll be interesting to see whether their burgeoning relationship lasts. This new couple certainly pissed off Caroline, a hot newcomer who’d been on a nice date with John the night before.

Are they in this for the long haul? Unclear, but we’re rooting for them!

Does it seem like they’ve banged each other? Not yet.

ANNALIESE AND JORDAN
Status: Unless there’s some sort of wild late-season plot twist, it looks like these two are done. They had a nice first date on the beach, after which Annaliese couldn’t stop gushing about how sweet Jordan is and how great he’d be as a husband, but in the latest episode Jordan broke up with Annaliese and told her he’s interested in pursuing someone new.

Are they in this for the long haul? It would appear not.

Does it seem like they’ve banged each other? Probably not, although Annaliese is a stage-five clinger, so it’s not impossible.

JORDAN AND JENNA
Status: Who, exactly, made Jordan forget all about kind Annaliese and throw romantic caution to the winds? None other than pink-haired Jenna, who exploded onto the beach with the manic energy of an undergraduate on Adderall. These two are both loudmouthed narcissists, so obviously they got along like gangbusters on their first date.

Are they in this for the long haul? Our instinct is to say yes, although they’re both so insane they could end up burning each other out.

Does it seem like they’ve banged each other? Any minute now.

Tune in this season for more drama, tears and sexual impropriety! This post is bound to get even more elaborate as the season unfolds. 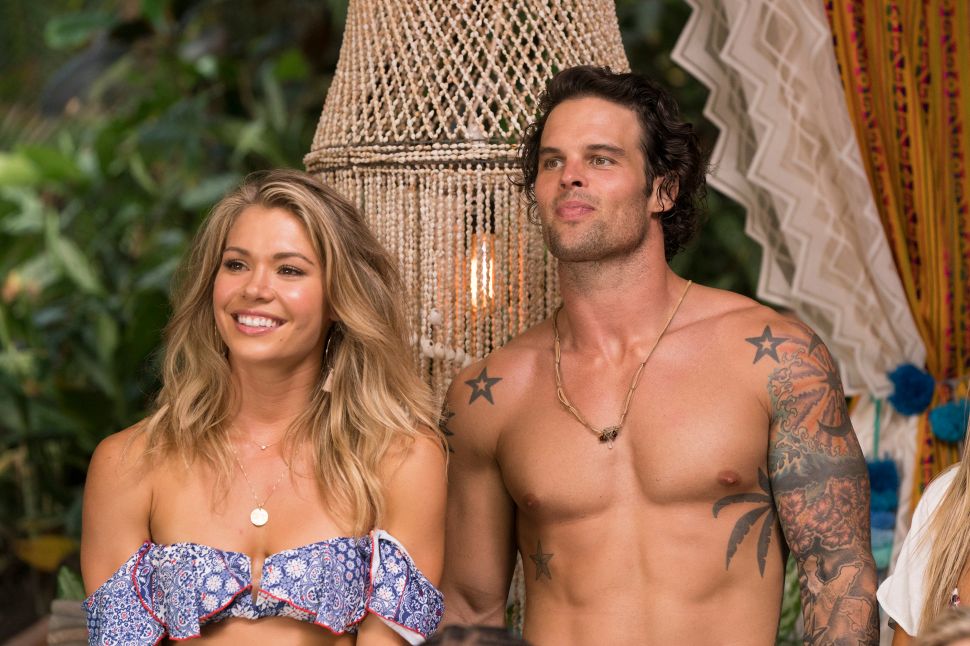