On this month in 1961, a literal divide between the Communist Soviet bloc and the democratic West manifested overnight in the form of the Berlin Wall. Encircling West Berlin and topped with barbed wire, armed guards and anti-tank defenses, the Wall forced people to stay in what had once been envisioned as an egalitarian utopia. In a way, it marked the end of a Communist dream, separating families, loved ones and an entire nation.

Now, almost 60 years later, a replica of the original wall will be erected in central Berlin as part of an experimental art project titled Dau: Freedom. Although the project is yet to be green-lit by city authorities, Dau is expected to block an area surrounding Berlin’s central boulevard Unter den Linden, which runs along major cultural landmarks like City Palace and the Brandenburg Gate, beginning in mid-October. The erected wall will be taken down on November 9, on the anniversary of the fall of the actual Berlin Wall in 1989, before it moves to Paris and London for cycles titled “Fraternity” and “Equality.”

On Tuesday, the organizers of the event, Berliner Festspiele, revealed snippets of the project. Dau will reportedly involve the work of artists like Carsten Höller, filmmaker Tom Twyker, performance artist Marina Abramović and musician Brian Eno as it recreates aspects of totalitarian living in a mini “city within a city.” But spearheading the project is Russian filmmaker Ilya Khrzhanovsky, whose experimental film, Dau, shrouded in mystery for years, will be shown to the general public for the first time ever.

The film is purportedly a biopic based on the life of the Nobel prize–winning physicist Lev Landau, whose life in Soviet Russia involved sexual experimentation and a psychiatric hospitalization before he died in a tragic car crash. When he began shooting it in 2008, Khrzhanovsky formed a closed Stalinist society in the Eastern Ukrainian city of Kharkov to mirror Moscow of the 1950s and 1960s. The film set was known as the “Institute,” and for three years hundreds of participants lived in Khrzhanovsky’s 12,000-square-meter city, dressing and behaving according to the strict rules of the director’s Soviet-era totalitarian regime.

“They fell in love, betrayed their friends, cheated on their lovers, ran experiments, grew old, had children, were arrested and lost everything,” a voice narrates in the trailer of the film.

It was one of the most expansive and consuming film experiments ever attempted: a Foucauldian system of surveillance complete with Soviet-era mechanisms of suppression, including fines for smuggling in cell phones and codes for anachronistic words like “Facebook” and “Google.” Michael Idov, a GQ reporter who traveled to the Institute for a feature, claims to have developed a “classic prison mentality” in “all of 48 hours.”

The Berlin event will be the first opportunity for the public to witness a glimpse of the 700 hours of raw footage that Khrzhanovsky obtained under these extraordinary conditions; his experiment will seem even more radical as it’s screened within a replica of a monument to brutality, repression and tragedy. Committed to creating an experience that feels disorienting and restricting, Dau will require visitors to exchange their cell phones for devices that provide instructions for the duration of the tour. They will also be required to register for a €15 visa ($17.50) in order to be granted entrance, a nod to the numerous checkpoints that ran along the Berlin Wall preventing citizens from crossing from East to West.

The aim is not to create “a Disney G.D.R.” (German Democratic Republic), said Thomas Oberender, the director of Berliner Festspiele, at a Berlin press conference. “It is not a film premiere but a mixture of social experiment, artistic experiment, and…an impressive form of world building.”

The costs of the Berlin project are estimated at €6.6 million ($7.7 million) and, adding to the controversy, the German newspaper Tagesspiegel has reported that a big backer of Dau is Sergey Adoniev, a multimillionaire businessman and philanthropist with close ties to Putin’s circle (under which political freedoms have already been significantly curtailed). Critics of the event, like the Berlin politician of the Greens party, Sabina Bangert, advised discontinuing the project out of respect for the victims who lived through such situations. Others were supportive, like Germany’s minister of culture, Monika Gruetters, who said she was “absolutely convinced this [would] be a world event.”

“The temporary reconstruction of the Berlin Wall recalls the wounds of a divided city,” Oberlander said in a statement to Observer. “The performance of DAU Freedom is a ritual to bring this wall down again in the course of four weeks. Thirty years after the reunification of Germany, thanks to the peaceful revolution in 1989, [the country] is once again divided and torn apart internally, divided by the extreme right-wing movements ‘Alternative for Germany’ and ‘Pegida’, like U.S. society is divided by Trump. With Dau, we touch our wound.”

Like Khrzhanovsky’s Institute, the Berlin Wall is a testament to the failures of an envisioned egalitarian utopia. The question of whether 29 years is enough time to so viscerally revisit the tragedies the wall represents, especially with people in East Germany still struggling for social and economic equality with their Western counterparts, is a salient one. But the hope is that the event will spark political and social discussion about freedom, identity and the perils of surveillance in a totalitarian state. The film’s radical set has been deconstructed, but as its trailer states—or maybe cautions: “The experiment is ongoing.” 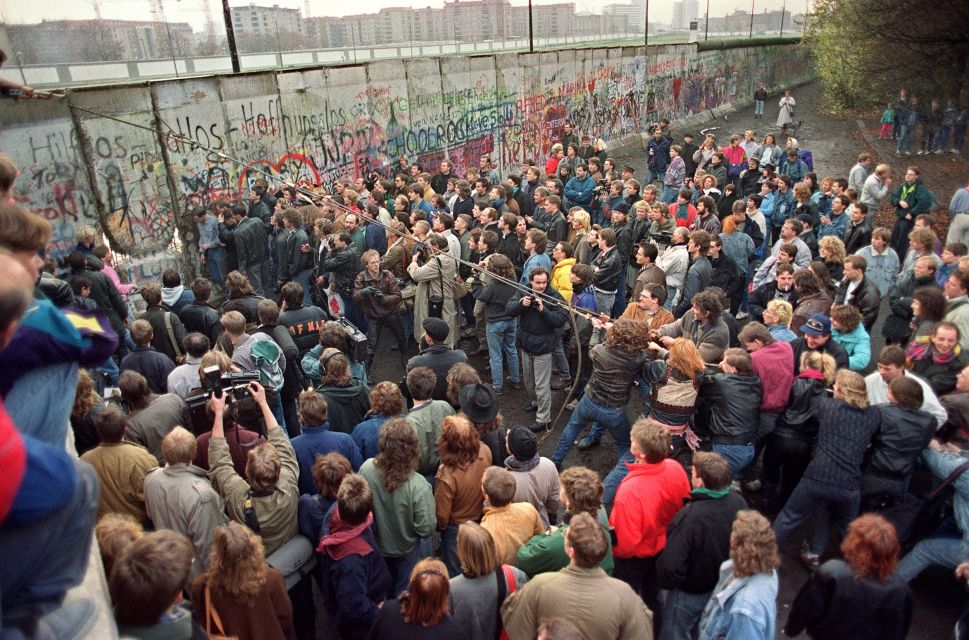