Watching Bachelor in Paradise feels increasingly like trying to make Barbies have sex, then settling for smashing their heads together to make them kiss, because the toys lack genitals.

The desire is there; palpable and made obvious by the way delicate limbs intertwine on cabanas and open mouths slobber enthusiastically. But just like with the Barbies, there are forces at work which have been deliberately calibrated to make sex between Bachelor in Paradise participants impossible. Cast members may not have plastic lumps where their penises should be, but for all the terrible luck they’re having getting lucky, they might as well.

Think, for a moment, about the sexual conduct you’ve seen on reality television before. It most certainly happens. Jersey Shore springs most readily to mind, a blessed program whose narrative format essentially revolved around the stars getting trashed on the beach, dancing at the club and hooking up with strangers or each other afterwards.

The Shore house even had a disgusting “Smush Room” where the guidos and guidettes would haul back their prey, swinging filthy comforters over their partners’ heads so the camera wouldn’t catch what was going on under the covers. There was abundant audible moaning, though. The proof.

Almost every man who’s ever been Bachelor is three-for-three with Fantasy Suites and is careful to give the audience all the telling clues that it went down. Many of the Bachelorettes seem to have also slept with all three finalists as well, with the exception of the ever-calculating Emily Maynard (who had a kid she know would watch the show).

And yet all anyone ever does on Bachelor in Paradise is make out, and this kissing very specifically only happens in easily-filmed nature, or on enormous chaise lounges in cabanas strategically placed to make your activity visible to everyone on the Mexican beach. “Why don’t they just sneak away to fuck in their beds?” you might be wondering. Well, dear reader, that’s because the Bachelor in Paradise cast is forced to sleep in bunk beds, a.k.a. barracks separated by gender, which are packed so closely together they make significant movement impossible.

So what about the ocean? Multiple times, Bachelor contestants have gotten things done there, due to the lack of other options (producers can’t regulate the sea). Juan Pablo and Clare had a watery 4 a.m. tryst that he later shamed her about, and Ben Flajnik and Courtney had a 20-second beach session on his season that reportedly mortified him and thrilled her.

The ocean option is rare, though, probably because the contestants are so cowed by the cameras and other boundaries put in place to keep them from screwing, they simply acquiesce. It makes sense! They’re only human, and humans will jump through many different hoops to have sex, but sometimes what’s too much is too much.

“Kissing is like a handshake in Paradise,” odious cast member Leo said recently, and although many of the other singles were quick to disagree, Leo actually has a point for once. So much kissing occurs between the constantly fluctuating couples on the show because that’s truly the only form of sexual expression available to these poor souls.

Additionally, a fantastic make out session is in many cases a strategic move to get a rose. Roses represent survival, which is the actual main goal of the show: staying in Paradise, so you can enjoy another week of making out on camera.nBy the time the next week rolls around, surviving means maybe making out with someone else. Banging is not required, or even front of mind, because banging isn’t integral to the competition that all of these game players are so obsessed with.

Despite the conservative conditions, a few weeks into Season 5, several BiP couples seem well on their way to falling in love. Although there’s been much passionate French kissing, caressing and necking, nothing in the realm of penetration seems to be in the cards anytime soon.

In last night’s episode, sweethearts Eric and Angela spent alone time swaddled in bathrobes in an opulent hotel bedroom. The night outside was pitch black; the lighting indoors was ideal for nudity. “This is it!” I thought to myself. “Someone on this godforsaken hell show is finally going to have an orgasm!” But of course, the producers had other ideas.

As Eric and Angela looked on in awe, a hotel employee wheeled an enormous bowl of ice cream the size of a small television into the room, followed by an equally gigantic platter of fancy assorted cheeses. My heart sank as I realized there was no way in hell they were going to have sex that night—they’d be too busy farting. 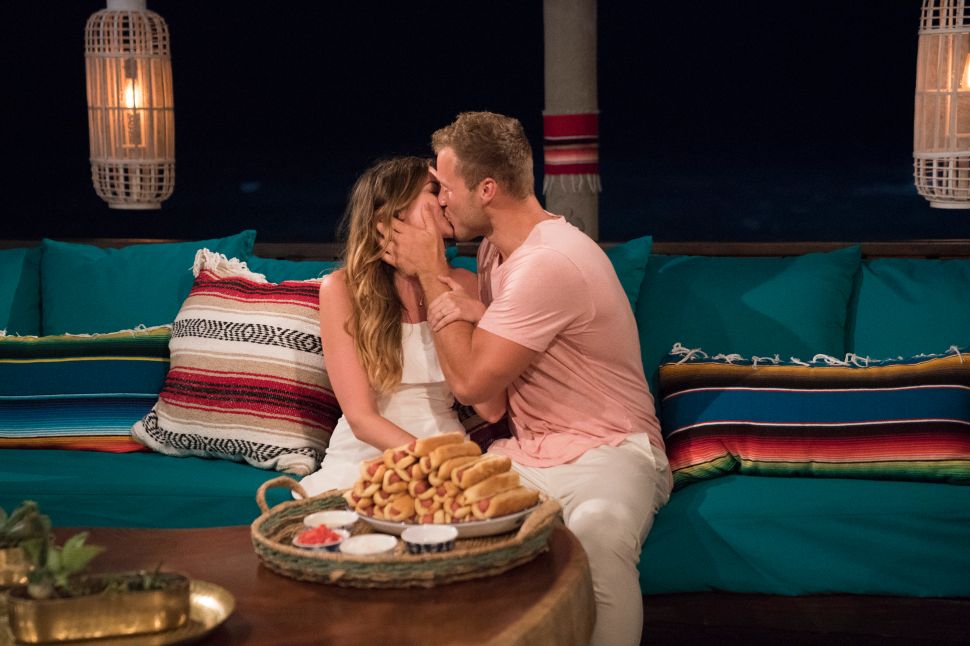