Despite the infinite possibilities of the web, our daily experiences with it can be surprisingly repetitious. We visit the same four or five websites (most of them blue), and browse feeds that present us with content that is algorithmically determined to be similar. How did everything get so predictable?

Sometimes, when the boredom becomes oppressive, there’s no joy quite like introducing randomness into one’s browsing experience (no, not StumbleUpon).

Recently, I’ve been spending my time having far too much fun with something a friend introduced to me, which we call Screenshot Roulette. It is, in its simplest explanation, discovering and looking at (remarkably) random screenshots that were uploaded to a thing called CloudApp.

Many of the images are very old, and were posted with zero intention of being seen by a larger audience. They are candid, they are unpredictable, and on face value, they are kind of… boring, save for the occasional corporate secret. On our brief digital spelunking expeditions, we’ve found:

(a) Passive-aggressive chats between coworkers from 2011:

(d) An image of an angry gorilla.

(Geez, Taisha, get your shit together.)

Initially, there’s something calming about the apparent mundanity of the images. When almost everything online is cynically engineered to be The Most Interesting Thing, it’s nice to find an alternative. It’s dull, maybe. But it’s also real.

The experience also often feels like crow-barring open an internet time capsule. Many of the images I found are older, from around 2011. It seems that the most common usage for CloudApp, at least in its early days, was for work-related image sharing. Through that lens, as you dig deeper into the banal, the images cumulatively take on a fascinating historical value.

Here exist snapshots of How We Worked In The Early 2010s. It’s as if thousands of pounds of shredded documents suddenly blew out an upper window of a Midtown office building, the various scraps circulated in updrafts for nearly a decade, gradually floating down to our feet, to be deciphered. Or, casually swept into a storm drain.

Some quick technical stuff. CloudApp links follow a predictable pattern — it’s always the shortened domain (cl.ly/) followed by a random alphanumeric string. All it means is typing cl.ly/xxxx, with a couple letters and numbers replacing the x’s. I’ve found that using four characters reliably turns up images without too many 404 errors. Since typing in the links gets annoying, and my keyboard probably can’t withstand many more fist-smashes, I decided to automate the process with a simple web tool that generates random CloudApp urls. There are occasionally dead zones, but for the most part, it works pretty well. Try it!

Like all things in life, after a while the fun of plugging through everyone’s random-ass bullshit decays, leaving a thin residue of shame and fear, as various uncomfortable realities become apparent. In this case, the buzzkills involve the general squeamishness that comes with internet voyeurism, and the (soft?) invasion of privacy it often entails. These files weren’t intended for a mass audience, even though they’re technically public. I wonder if many users even realized this when they were using it.

This could potentially lead to relatively harmless trolling. CloudApp allows for annotations and comments on images, which means random users can contact you. So on an 8-year-old image of a tube of MaXFactor Xperience Foundation, I drew a lil smiley (Xtra wrinkly) and then commented “hey :).”

The semi-public nature of the images is far from harmless, though. As many users likely had an expectation of privacy — however erroneous — this leads to many unintentionally revealing potentially sensitive information to the world.

When I began writing this article, I decided to sign up for a CloudApp account, so that I could accurately describe how it works. It turned out I already had one. I recovered my password and found that I had uploaded nine files in 2012 — resume drafts, an image of Guy Fieri hanging out with the lead singer of Smash Mouth in a convertible, and a screenshot of the time the KidzBop Vevo Channel on YouTube accidentally ran the Red Band trailer for a movie that showed naked breasts (nsfw, obviously) before a children’s song (whoops!).

I don’t remember uploading any of these images, or even using CloudApp, and yet these files were sitting there, waiting to be excavated. I deleted them all asap. Except for the Guy Fieri and KidzBop thing — they must live forever.

Considering the general anonymized nature of the images and their associated accounts, along with the amount of time that has passed since they were uploaded, the privacy concerns aren’t exactly dire. Perhaps they just give us another unsettling example of how carelessly many of us treated our personal privacy only a couple years ago. It’s terrifying to think what else about ourselves we scattered around the internet during this time, especially after the recent betrayals of various corporations who we (dumb fucks, all) naively trusted.

Still, I doubt Screenshot Roulette will exist much longer after this article is published. Enjoy the DullNet before CloudApp privacy settings are automatically changed, and the whole game is vaporized. Then, I guess, we can return to our normal lives, refreshing the same four websites all day. 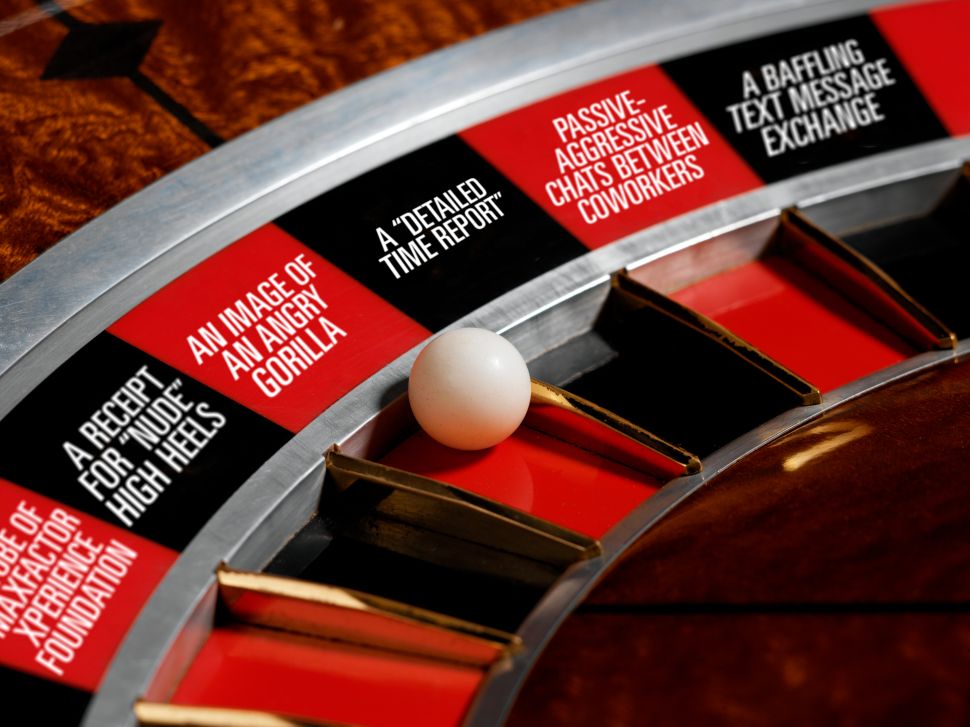