Burning Man has only one golden rule: leave no trace. Burners hold this to be the bedrock of their identity. It’s also probably key to getting their permit renewed every year.

Which is why it was surprising to many that after 2018’s festival ended on September 2, the main hull of a Boeing 747 was left parked in the Black Rock Desert.

The plane’s owner is Big Imagination Foundation, a Burner-run nonprofit that seems to have the singular goal of creating the most ridiculous “art car” that festival-goers have ever seen. The jumbo jet in question is the crown jewel of that effort, the handiwork of 5,000 volunteers retrofitting the fuselage with a dance floor, 150,000 LEDs synched to music, as well as other Zen-filled amenities like an emotional baggage checking area.

The foundation views the plane’s current location as regretful, but necessary. Big Imagination has been awaiting a permanent storage site for the airliner to remain close by Black Rock City. International outlets have reported on this news as if the plane was lazily left in the desert to rust, largely due to the fact that, late last week, the U.S. Bureau of Land Management (BLM) in Nevada said it considered the plane to be trespassing.

“This whole thing has been blown way out of proportion,” said Ken Feldman, Big Imagination co-founder and the project’s visionary. “The end goal was always to park the plane somewhere close to Black Rock City. The BLM has taken the proper steps, and we’ve followed their directions as closely as we can.”

Most of these stories imply some deep feud simmering between the foundation and the Bureau of Land Management, but the folks at Big Imagination tell Observer they have been actively discussing their 747 plans with the BLM since before the 2018 festival started.

Transporting a grounded plane to the playa was a logistical maelstrom, largely due to having to maneuver the jetliner through the tiny burg of Gerlach, Nevada. The first part of the car (just the plane’s nose) appeared at the 2016 festival and was trucked away afterwards. But this year’s iteration saw the entire fuselage, sans tail and wings, being hauled to the festival site. The journey requires de-poling telephone wires in Gerlach, turning off most of the town’s electricity, disrupting the train schedule and shutting down Highway 447. It’s a Fitzcarraldo-esque feat estimated to cost upwards of $100,000 for a single trip.

“Everyone in Gerlach was so awesome about accommodating us. But it’s a real impact on people’s lives. It’s not sustainable,” said Feldman.

The perfect solution was found in 2017 when fellow Burners offered to host the plane at their isolated ranch. That opportunity fell through in 2018. Big Imagination scrambled for an alternative, hoping to keep the 747 north of the playa and far away from poor Gerlach. Then, a new benefactor came forward with a substantial tract of land to lease, but also with huge bureaucratic baggage.

“A single family owned the land since the 1870s,” said Feldman. “The property is adjacent to BLM land, and we couldn’t find a recent survey to prove where either party’s ownership ended or began.” BLM put a hold on the project until the area in question was definitively known to belong to this Nevadan family. Feldman arranged for a surveyor while conducting his own investigations, combing through the county’s records until he found the original nineteenth-century title.

This multi-week, painfully slow process concluded on Monday when BLM finally agreed that the government didn’t own the land. Red tape rolled up and thrown away, Big Imagination can now move their plane off the playa and out of the limelight.

On Thursday, foundation representatives and volunteers had been camping out near their beloved 747. They’ll rise with the sun on Friday and carefully tow the plane to its newest home. Cameras will be on hand to record the event, but the footage will be carefully cut so as not to reveal the final destination. The location will be a closely-guarded secret in order to keep vandals from visiting the project with spray paint cans, torque wrenches, or whatever other tools they’d use for mischief. 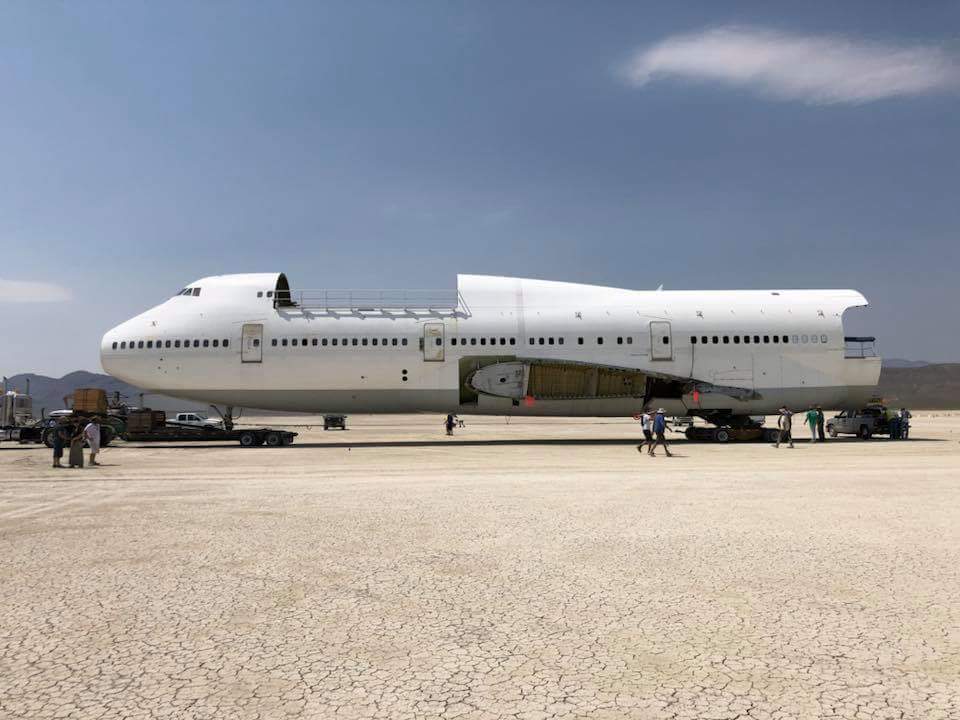