The third day of the Senate confirmation hearing for Brett Kavanaugh is well underway, featuring a particularly heated argument led by Sen. Cory Booker (D-N.J.) over the release of previously withheld confidential documents. But it’s worth pausing to look back at a tense exchange last night between President Trump’s nomination for the Supreme Court and Sen. Kamala Harris (D-Calif.), because it gets right to the heart of why Kavanaugh is even sitting there in the first place.

CSPAN has posted the entire nearly 8-minute exchange between Kamala Harris and Kavanaugh on the Mueller probe. It is worth your time. pic.twitter.com/ezJVEuDeUK

After asking if he’d discussed the Robert Mueller investigation with anyone, a question that seemed to take a stammering Kavanaugh aback, Harris zeroed in a particular group of individuals. Had he ever discussed the case with anyone at Kasowitz Benson Torres, the law firm founded by Trump’s personal attorney Marc Kasowitz.

“Be sure of your answer, sir,” Harris said, seeming to indicate that she was aware of such a conversation.

What followed was an excruciatingly embarrassing back and forth, in which Kavanaugh attempted to dissemble and broaden the scope of her question in order to provide plausible deniability.

“I’m not remembering, but I’m happy to be refreshed or if you want to tell me who you’re thinking of,” Kavanaugh answered. “Kasowitz…” he mused, seemingly trying to place the name of the firm as if he had never heard of it before.

It was not a particularly credible performance.

Harris remained dogged, spelling out the specific question she wanted answered over and over again as Kavanaugh said he would need the names of people who worked there to know if he spoke with anyone about it.

“How can you not remember whether or not you had a conversation about Robert Mueller or his investigation with anyone at that law firm?” Harris asked.

Was there a specific person she had in mind, Kavanaugh repeated.

“I think you are thinking of someone, and you don’t want to tell us,” Harris said.

The exchange—which was interrupted by Republican Sen. Mike Lee of Utah, and then a protestor—eventually ended after about eight minutes.

The question of whether or not Kavanaugh had been asked by lawyers connected to the president what he thought of the Mueller investigation is a crucial one. Donald Trump clearly has one specific interest in mind in any political decision he makes—protecting himself—so it’s not exactly out of the realm of possibility that he would have his lawyers check Kavanaugh’s temperature on where he stood on the ol’ indicting the president thing. There are few other things that make  Kavanaugh stand out from the hypothetical field of similarly qualified potential nominees.

Kavanaugh, as has been widely reported, suggested in a 2009 Minnesota Law Review article he authored, that a sitting president should not be subject to criminal investigation until after he has been impeached and removed from office.

“I believe that the President should be excused from some of the burdens of ordinary citizenship while serving in office,” he wrote. “We should not burden a sitting President with civil suits, criminal investigations, or criminal prosecutions.”

An indictment of a sitting president, he wrote, would “cripple the federal government.”

The Trump administration, you can be sure, took note of that opinion.

Trump SCOTUS team has looked at Kavanaugh's past comments on indicting a sitting president, we've confirmed. In 2009, Kavanaugh wrote: "The indictment and trial of a sitting President, moreover, would cripple the federal government…" https://t.co/rDHJs5RiUY

A video has also emerged of Kavanaugh at a 1998 Georgetown Law School conference raising his hand when asked if he believed “a sitting president cannot be indicted during the term of office.”

Never mind where he stands on Roe v. Wade or any other number of issues that Kavanaugh will likely prove terrible on, issues that will have a dramatic impact on the American people. Do you really you think there is any cause more pressing to Donald Trump than saving his own ass?

This morning, Kavanaugh released a statement on the question. “I don’t recall any conversations of that kind with anyone at that law firm,” he said, in part. “I haven’t had any inappropriate conversations about that investigation with anyone…”

The word inappropriate is doing a lot of work there.

When asked this morning by a CNN reporter why she pressed the issue, Harris, didn’t provide much more detail, but did say that she had “good reason to believe there was a conversation.”

As any good prosecutor will tell you, you don’t ask a witness a question that you don’t already know the answer to, and say what else you will about Harris, she’s certainly a prosecutor. You also don’t over-promise something to the jury you don’t think you can deliver on. 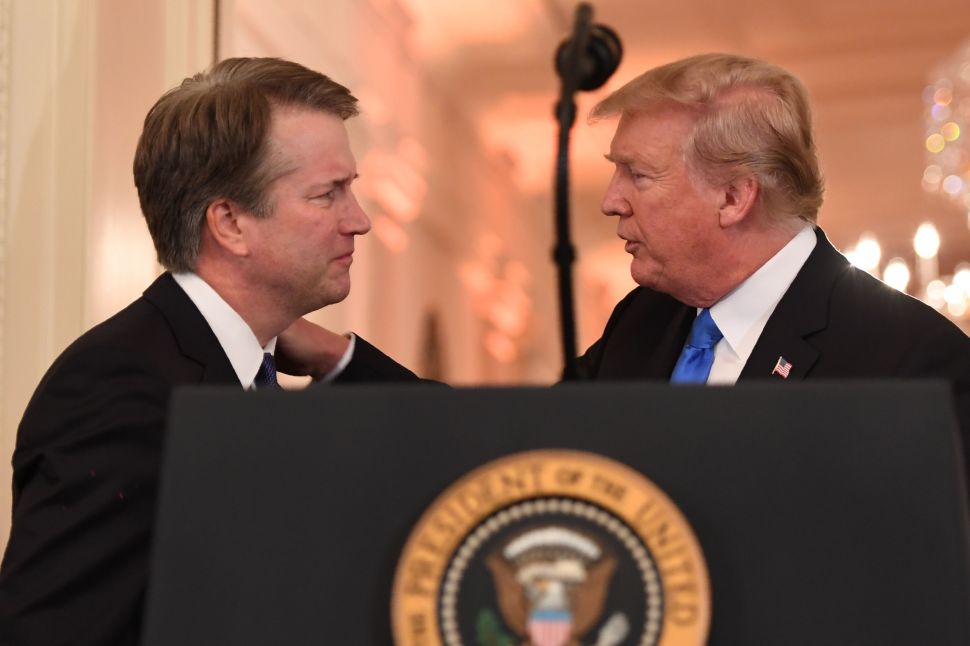