On Wednesday, Marco Rubio (R-Fla.) and conspiracy theorist Alex Jones clashed outside the Senate Intelligence Committee hearing on Internet censorship—an encounter which was captured by The Gateway Pundit’s Cassandra Fairbanks.

As the Florida senator fielded questions from reporters, Jones interjected to plug his fringe media empire InfoWars. Like a scene torn from the imagination of playwright Edward Albee, the two protagonists of this meeting on Capitol Hill traded barbs, calling each other “clown,” “frat boy” and “snake.”

“He’s not answering,” said Jones as Rubio fielded a question on shadow banning. “The Democrats are doing what you say China does.”

“I don’t know who you are, man,” responded Rubio. “I don’t really go on your website.”

“That’s why you didn’t get elected. You’re a snake,” shot back Jones, touching the senator’s shoulder to keep his attention. “Marco Rubio the snake. A little frat boy here.”

“You are a little gangster thug,” sneered Jones, his voice rising in intensity. “The Democrats are raping the Republicans!”

Having enough heckling, the politician broke with the gaggle of reporters, telling them, “You guys can talk to this clown.”

“Go back to your bath house!” yelled Jones as Rubio beelined away from the spectacle. “There goes Rubio…Little punk.” 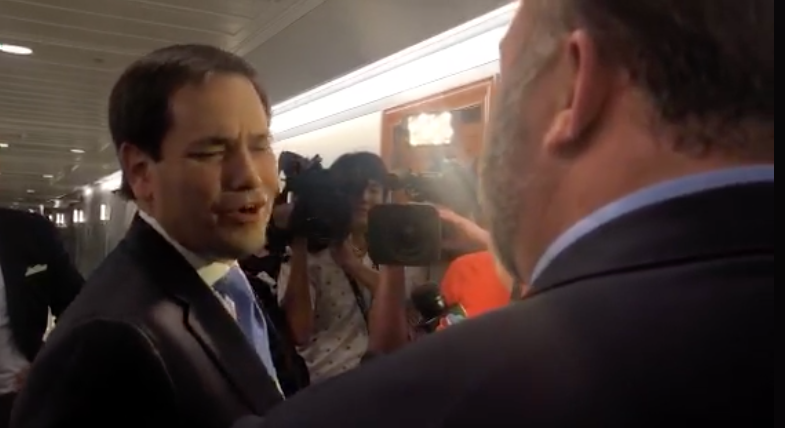