No love lost between these two…

“Stormy Daniels is right now working in strip clubs in little towns onstage, people are throwing things at her. You’re wearing a $1,000 suit. Why are you not paying her?” asked Carlson as he accused Avenatti of “exploiting” the adult film actress alleging an affair with President Trump.

“You’re a little creepier than I realized,” quipped Carlson.

“I expected to be treated with respect, and certainly not to be lied to,” Avenatti told Observer by phone on Friday morning. “I had no idea until after the show because I don’t have any way of seeing the camera lines when I’m on set.”

“I thought that it was a new low for Fox, which is saying something,” continued the attorney. “And I thought it was pathetic and cowardly of Tucker Carlson.”

“I told him he was a joke and I meant it,” said Avenatti when asked about what was said during the commercial break.

“I think it’s bad form to repeat off air conversations from the set, but you can imagine what it was like,” Carlson told Observer in an email. “His claim that we lied to him about anything is absurd. We didn’t say anything that I haven’t said publicly many times before. I think the segment speaks for itself. I hope people will watch it.”

The showdown between Avenatti and Carlson followed months of insults between the two men over social media and cable television—this past spring, after accusing Carlson of lying to his viewers over an invitation to appear on the show, the attorney tweeted out the contact information for a Fox News booker. While the segment failed to deliver a nuanced debate over the two’s opposing viewpoints on topics like immigration, the Russia investigation and campaign finance violations, it did provide sensationalism—though maybe not as much as they had hoped for. 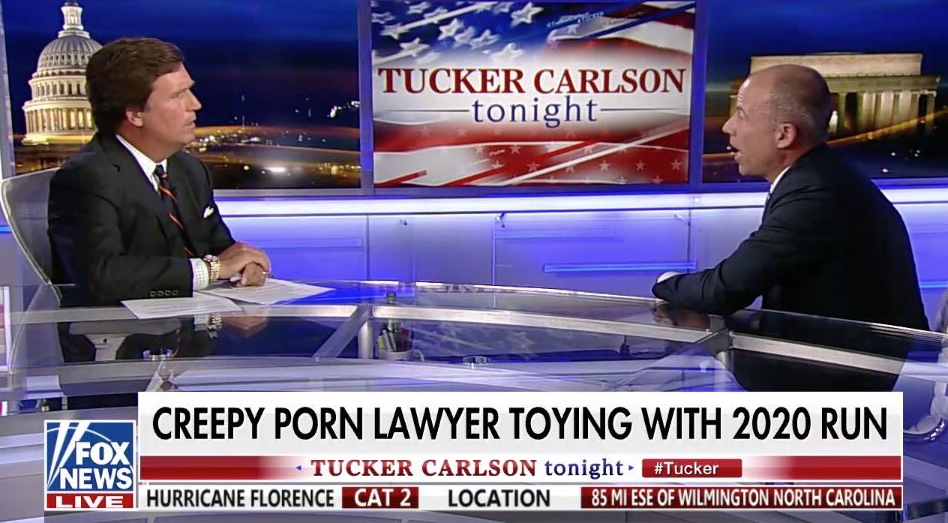