The State Department is still reeling from its major gutting under Rex Tillerson’s scalpel.

Which is why Mike Pompeo is giving the government agency some much-needed reconstructive surgery! No, the former Tea Party and CIA director will not be curbing Chinese military expansion in the Middle East under the guise of humanitarian aide, or demilitarizing an agency intended for diplomacy. He’s nicknaming his team the “Department of Swagger.”

Christening his new Instagram account, Pompeo debuted a new State Department seal with the words “Department of Swagger” emblazoned along the edges. “Thought I’d launch my Instagram account with some @statedept #swagger,” wrote the state secretary.

Department of Swagger has hustle & heart! Follow @SecPompeo for sneak peeks behind the scenes! pic.twitter.com/bYy1PwTwUk

Shakespeare was the first to use "swagger." Gen. Patton had his swagger stick. At @statedept, we've got some #swagger too. It's our confidence in America's values.

“Shakespeare was the first to use ‘swagger,'” wrote Pompeo. “Gen. Patton had his swagger stick. At @statedept, we’ve got some #swagger too. It’s our confidence in America’s values.”

A State Department spox later tweeted an image of the agency’s seal, writing “Department of Swagger has hustle & heart.”

Department of Swagger has hustle & heart! Follow @SecPompeo for sneak peeks behind the scenes! pic.twitter.com/bYy1PwTwUk

The agency’s rebrand to “The Department of Swagger” follows leaked emails from Pompeo, in which the agency head tells his underlings to “Keep on crushing it” following his trip last week to India and Pakistan.

Pompeo sent an email to State Department staff today outlining his trip last week to India and Pakistan. This is how he signed off: pic.twitter.com/tCtUWur15k

So far, the Secretary of Swagger has accumulated just over 4,000 followers, and judging from early reactions on Instagram, the digital rebrand may not be having the intended effect.

“Why is this happening,” asked dis_graaace_ful.

“This is so embarrassing. For you,” wrote girlsdaymcm.

With this type of shakeup pulsing through Washington, expect to see the Department of Housing and Urban Development pivot to “House of Chill” in the next few weeks. 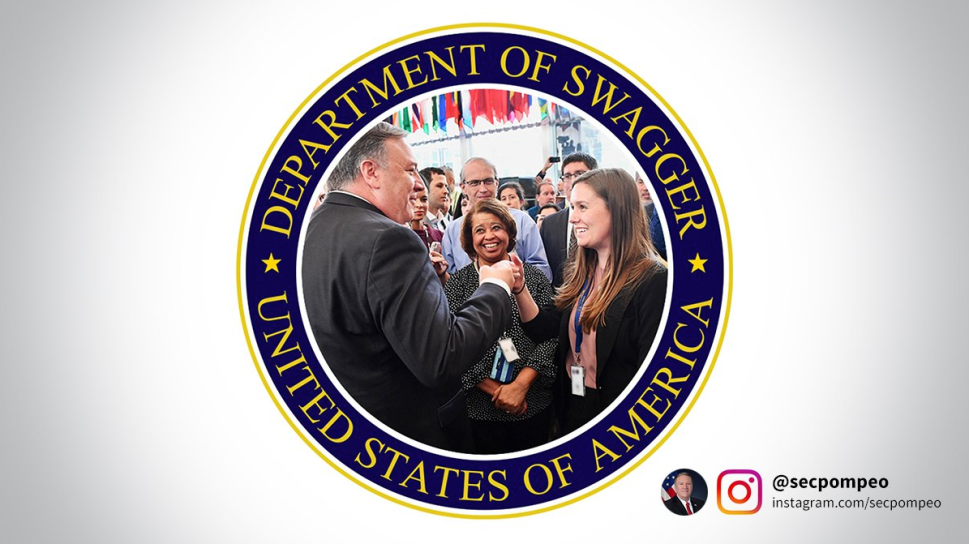