With recent reports of stagnant to slow arts industry growth and a shift to nearly 50 percent of all sales coming from fairs (costly ventures themselves to take part in), art galleries are going to need more than just a reduction in renting space at those fairs to stay afloat. One strategy is simply to reduce their reliance on the events in general by launching higher caliber exhibitions that can’t be produced in cramped, temporary booths. Luring the collectors in with museum quality shows seems to be a very new tactic on the part of dealers.

As if on cue, Chelsea galleries (and museums too, for that matter) have given us a better fall season than we’ve seen in years. In fact, there’s so much good work on view, I actually found myself wondering how I was going to list it all. That’s not a bad problem to have, but it gives gallery goers even more ground to cover than usual. Time to get to it. Here’s the best of New York’s fall 2018 gallery season.

Let’s start with the one show you absolutely shouldn’t miss. Art just doesn’t get any better than what’s on view in Chelsea at David Zwirner’s “Endless Enigma: Eight Centuries of Fantastic Art” (through Oct 27), an exhibition that brings together three floors of psychologically charged artwork from historical giants such as Titian, Hieronymous Bosch and Francisco de Goya to contemporary masters like Louise Bourgeois and Sherrie Levine. It’s hard to overstate the sheer ambition and impressiveness of the 800 years’ worth of work curator Nicholas Hall brought together—much of which has been borrowed from museums and private collections. (In fact, it’s so impressive, I overheard a collector in Chelsea gossiping that the gallery had borrowed works from the Louvre—a rumor dismissed as untrue by a press representative from Zwirner.)

Of the more than 60 works on display, most are vaguely unsettling. Near the entrance of the show, crowds swarmed around the famed 16th century painting, The Garden of Earthly Delights, by a contemporary follower of Hieronymus Bosch. It pictures dozens of naked figures generally having a good time with strange beasts and flora. On a neighboring wall, two Lisa Yuskavage paintings turn heads. In one, a queen-like figure with cereal box–shaped breasts stares stoically into the void. In another, a crouching naked woman with a dog nose fully exposes her crotch. It’s classic Yuskavage, seductively painted and simultaneously creepy.

That creep is everywhere in the exhibition. There’s a 16th century gilded bronze clock-cum-chariot driven by a charioteer who looks like a clown, a Robert Gober flesh blob filling a laundry basket and a Francis Alÿs painting of a skeleton running away with his own detached forearm. Everything in this show is weird.

Charline von Heyl’s 17 tensely dramatic paintings at Petzel demonstrate a similar dedication to invention. Nobody understands paint, composition and pattern as well as von Heyl, and this exhibition of abstract work makes that assertion definitive. In one painting she skillfully balances a bold black form stretching across two ends of her stretcher with delicate bengay dots. In another, an angular patchwork of blackened lines serves as scaffold for swooshing shapes filled with pink and blue paint. While von Heyl renders largely static forms, the works often allude to an abstract narrative that implies action of some kind. Titles reinforce this—Poetry Machine #1, Dub and 5 Signs of Disturbance.

Matthew Marks’ show of Suellen Rocca’s drawings walk a line between thrilling and disturbing. An original member of the influential Chicago-based group the Hairy Who, these 30 drawings made between 1981 and 2017 picture a mother breastfeeding a fish, a bust that has become a flower, and a meditating figure whose hands and feet are made of blossoms. It’s wildly inventive stuff, but it’s the feeling of so-new-it’s-wet that made me feel a bit short of breath. That’s what amounts to a thrilling art viewing experience.

Julie Heffernan’s 12 nude self portraits picture the artist handling a seemingly endless scroll of images to create an uneasy doubling effect. Situating the artist inside old master salons, the scroll mimics the message that images and histories endlessly replicate themselves and affect how we interpret the world. The scroll creates a simplified representation of the contemporary visual world, but a few works, including Self Portrait with Eruption, give the show a big feminist punch. In this painting, Heffernan poses seductively in a tool belt, draping the scroll above her waist, her crotch fully exposed. Here, the only purpose of the scroll is to further sexualize her, which, as a representation of the sum of all images, feels about right.

The aesthetic world of Italian sculptor, painter and poet Fausto Melotti resembles the show’s title—a deserted city. In this show, pedestals look like highway on-ramps that divide the Hauser & Wirth space into exhibition display slabs. Even with seven enormous, unrendered plaster figures at the center, called I Sette Savi (The Seven Sages), 1960, a sense of vast emptiness fills the space.

For this reason, it’s not surprising to learn that the stark surrealist paintings of Giorgio de Chirico provided much inspiration to Melotti. But Melotti’s sculptures, which were greatly influenced by the pain and destruction caused by the Second World War, feel slightly more depressed than those of de Chirico. An arrangement of terracotta buildings, called Il Grande Canal, 1963, appears completely abandoned. Even the small maquettes of rooms in which Melotti arranged his tiny family figures lack intimacy. Curator Edoardo Gnemmi’s exhibition design delivers the final blow here by rooting these figures firmly in art history. He literally boxes them into recesses in the wall.

It’d be nice if sex was always as hot as it is on TV, but the average person shares more in common with the awkward figures in John Wesley’s erotic paintings (1980-2000) than anything Hollywood produces. And that’s what makes these works so infinitely relatable. The naked lesbian hanging out in the mountains, the balding dude nervously eating out his mate, the tired eyes of the woman staring at her partner—it’s not sexy, but it is real. Or is it? Wesley renders all of his paintings in his trademark, flat, cartoonish style, thus giving the work an air of lightness. Some of the paintings are even laugh out loud funny, which, in a gallery tour around Chelsea, is surely a great note to end on. 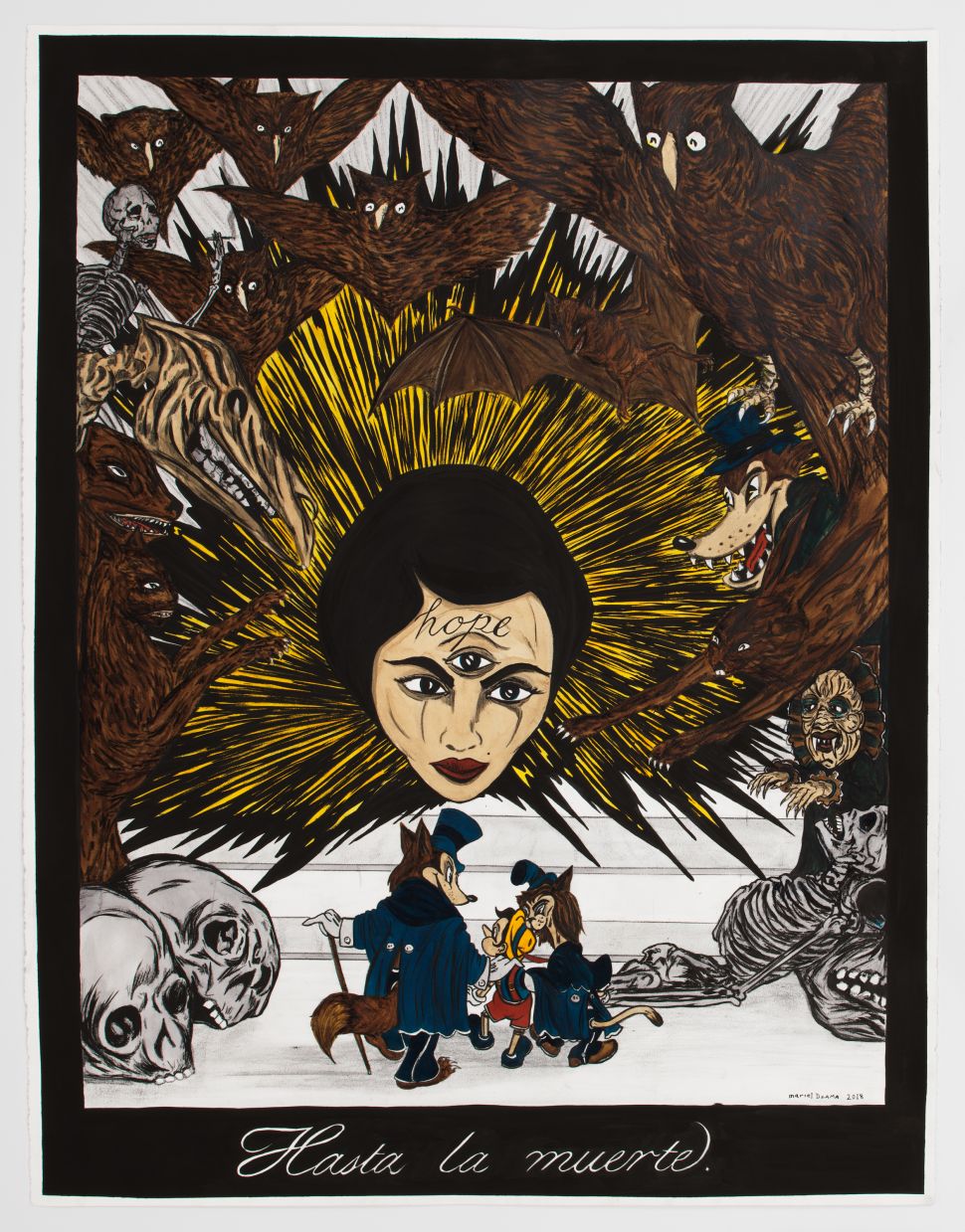