Ever since the near-fatal poisoning in March of Sergei Skripal and his daughter Yulia in the bucolic English city of Salisbury, suspicion has focused on the Kremlin for the brazen crime. Employing Novichok, a weapons-grade nerve agent, to strike down the Skripals was astonishingly aggressive even for Moscow, which in recent years has been on a global killing spree of an audacity and lethality not witnessed since the days of Joseph Stalin.

The British government has consistently pointed the finger at the regime of President Vladimir Putin. Armed with intelligence as well as forensic evidence that established Moscow’s likely culpability, little more than a week after the failed hit, Prime Minister Theresa May denounced Moscow’s efforts to dodge responsibility and expelled 23 Russian diplomats—in reality, spies—from Britain. The gravity of the Skripal case has only grown since, not least because almost four months after the attack, poison left behind by the assassins struck down two innocent Britons, one of whom, Dawn Sturgess, died from exposure to Novichok.

This week, the May government put the case back on the front pages by publicly outing Kremlin agents as the Salisbury assassins. The prime minister named two Russian spies, Aleksandr Petrov and Ruslan Boshirov, as the “officers of the Russian military intelligence service” wanted for the crime, adding, “This was not a rogue operation. It was almost certainly approved outside the GRU at a senior level of the Russian state.”

Petrov and Boshirov are aliases, and according to British intelligence the GRU officers have traveled extensively outside Russia on travel documents in those names. The case against the men revealed by London is impressive, encompassing security footage of the hitmen in several English locations in early March, including Salisbury, as well as evidence that their hotel room had Novichok in it. British investigators tracked Petrov and Boshirov’s travels to England and back to Moscow for the hit, providing images of the perfume bottle the GRU officers used to transport their highly lethal nerve agent.

Forensic evidence here bolsters logic. Skripal was a GRU colonel, and it’s hardly surprising that his former service, which views the pensioner as a traitor and defector, was eager to dispense with him. Moreover, GRU is notorious for its aggressive and sometimes lethal operations abroad. Back in 2003, GRU officers got caught blowing up the exiled Chechen leader Zelimkhan Yandarbiyev in Qatar with a bomb in his vehicle. The Kremlin’s killers were shoddy in covering their tracks, but that public embarrassment in Moscow did nothing to tamp down GRU operations. Indeed, since 2014, military intelligence has become President Putin’s preferred instrument for murder and mayhem outside Russia’s borders.

A brief review of GRU’s recent “greatest hits” reveals the extent of the problem. First came the use of that service’s “Little Green Men” to steal Crimea, followed by GRU’s outsized role in Moscow’s invasion and ongoing dirty war in eastern Ukraine. That ugly conflict includes GRU’s hand behind the shootdown of Malaysian Airlines Flight 17 in July 2014, killing 298 innocents. Then there was GRU’s failed coup in Montenegro, which came up short thanks to appallingly sloppy tradecraft by Russian spy-terrorists. To say nothing of GRU clandestine operations in the theft of emails belonging to Hillary Clinton and the Democratic National Committee, whose public release did so much to throw our presidential election Donald Trump’s way two years ago. Just last week, GRU operatives were busy in Germany, stoking far-right riots in Chemnitz. Wherever something nefarious and Kremlin-flavored is going on these days, GRU’s black bat is generally lurking nearby.

None of this is rogue activity. Vladimir Putin, despite his own past with the KGB and its domestic successor the Federal Security Service, or FSB, which views GRU as a bureaucratic rival, has opted to employ his military intelligence all over the world in highly risky and aggressive operations. It’s what I’ve termed Special War, that shadowy amalgam of espionage, propaganda and terrorism which Moscow excels in. The Salisbury assassination demonstrates that GRU is dangerous and careless in equal measure.

We should hope that, with the negative press this week care of Prime Minister May, the Kremlin will reassess the wisdom of employing weapons-grade nerve agents in Western cities. There is direct precedent here. Back in 1988, a hitman dispatched by Communist Yugoslavia shot Nikola Štedul, a Croatian émigré, several times as he walked his dog in a sleepy Scottish town. Despite multiple wounds inflicted at point-blank range, Štedul miraculously survived, and his would-be killer, Vinko Sindičić, a mass-murderer for Belgrade, got caught thanks to sloppy tradecraft. Cold War Yugoslavia employed wetwork against its enemies abroad in a manner very similar to Putin’s Russia today, and just like GRU, Belgrade’s spies grew slack and overconfident. Sindičić was convicted of attempted murder and spent 10 years in a British prison. After this debacle, Yugoslav intelligence reassessed the wisdom of conducting assassinations abroad.

Vladimir Putin and his increasingly rogue regime would be wise to do the same. The Salisbury killers may not be in custody, but they have been outed. London now is promising to take the fight to the enemy, disrupting and dismantling Russia’s spy-killer networks. Western counterintelligence can do that, if the will finally exists to push back against the Kremlin’s Special War in a concerted fashion. If we do not, GRU will continue to act as a top espionage and terrorist threat to the West, rivalling Al-Qa’ida and the Islamic State in its lethality. 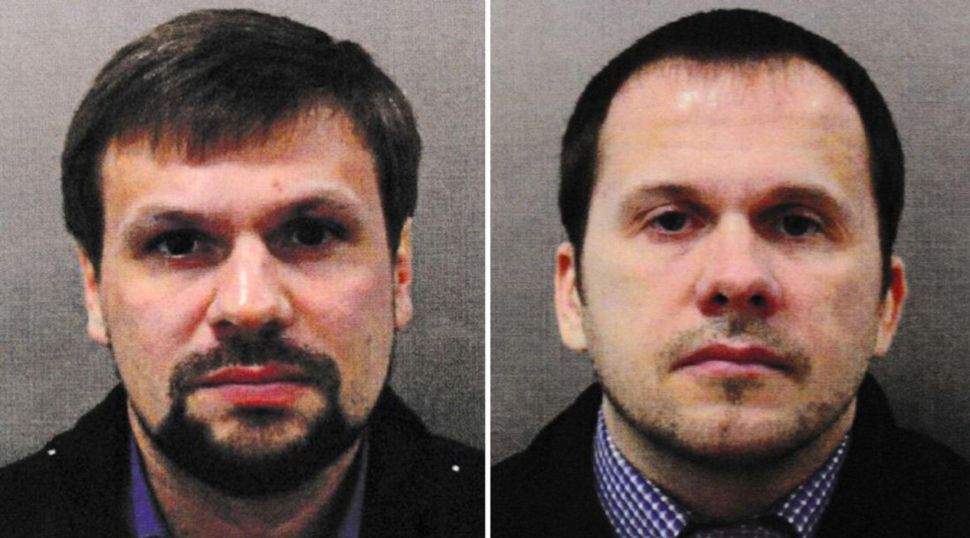