Voltaire is supposed to have said that God is on the side of the big battalions, but there can be no denying that, even in this age of technology-driven conflict, when machines do much of the dirty work once done by men, numbers still matter in war—and in deterring it.

Here NATO has a problem, since its eastern flank includes several countries whose militaries are dwarfed in size by the neighboring Russian bear. For instance, while recent defense efforts in Estonia are impressive, that little country of not much more than a million citizens would be steamrollered by the Kremlin’s forces in the event of war, before NATO reinforcements could arrive in enough numbers to help.

The outlier is Poland, which stands guard on the Atlantic Alliance’s vulnerable eastern flank. Warsaw’s military is NATO’s bulwark against Russian aggression from the east, especially considering Poland’s border with Russia’s Kaliningrad exclave, which houses late-model ballistic missiles aimed westward. While there is a now a modest deterrent force drawn from a across the Alliance standing watch close to Russia, including a rotational U.S. Army armored brigade in Poland, military reality dictates that the success or failure of any Kremlin aggression against NATO will be determined by Polish resistance, more than any other factor.

Here, there is good news. The current right-wing government in Warsaw has many detractors, but none can deny that it takes the prospect of war with Russia seriously. Current military modernization efforts in Poland are among the most significant in NATO, in part because this is one of the mere handful of countries in the Atlantic Alliance which spends the “required” two percent of GDP on its military.

The results are impressive. Active duty strength has jumped from 100,000 to 130,000 personnel over the last three years, with an aim of 200,000 soldiers by 2025. New weaponry is being purchased in all categories—armor, artillery, aviation and air defense, most importantly, including a recent $4.75 billion deal to purchase Patriot missiles from Raytheon, while last year saw the creation of the Territorial Defense Force, a part-time force equivalent to the U.S. National Guard, with 17 light infantry brigades spread across each Polish province to deter any Russian “Little Green Men” who might appear.

The details tell the story. Ground forces have been counted by divisions for more than a century. The division is the basic all-arms building block, with infantry, armor, artillery, and supporting arms combined to project power on the battlefield. Polish Land Forces counted three divisions until a couple days ago. The active U.S. Army, by comparison, has 10 divisions, most with three or four maneuver brigades and a strength that varies between 15,000 and 20,000 soldiers.

Over the weekend, Warsaw added a fourth division, a significant enhancement to deterrence on the Atlantic Alliance’s eastern frontier. As announced by Defense Minister Mariusz Błaszczak yesterday, this fourth division will be headquartered in Siedlice, in Poland’s northwest, but it will eventually move closer to the country’s vulnerable east. One of the anomalies facing the Polish military is that, thanks to legacy bases from the Cold War, when Moscow-controlled Communists ruled in Warsaw and NATO was the enemy, the lion’s share of Poland’s military assets can be found in the West, on the wrong side of the country from where the threat is now. That is slowly changing, as Warsaw repositions its military to face a resurgent Russia.

The new division will have three maneuver brigades, two of which—Warsaw’s own 1st Armored and the 21st Highland Rifles, colorfully-dressed mountaineers—already exist and will be bolstered by a third to be created as soon as possible. History matters in Poland, and its military is proud of its traditions, so the new division will be titled the 18th Mechanized, to carry on the tradition of the previous 18th Division, hailed as the Iron Division for its heroic performance in stemming the Kremlin’s invasion of 1920 at the gates of Warsaw. With symbolism that few Poles could miss, Defense Minister Błaszczak announced that the reborn 18th Division’s commander, Brigadier General Jarosław Gromadziński, will assume his post on September 17, the day in 1939 when Joseph Stalin joined Adolf Hitler’s invasion of Poland, sealing that country’s terrible fate in the Second World War. Poles also recall (if few Americans do) that September 17 was also the day in 2009 when President Barack Obama dropped Pentagon plans to deploy a missile defense shield over Poland and the Czech Republic.

Poland, NATO and America are living a very different reality nine years later. President Obama’s hope for a “reset” with Moscow ended in tatters, crushed by the reality of Russia’s aggression against Ukraine in 2014 and the Kremlin’s aggressive meddling and worse in Western affairs, not least in our presidential election in 2016. Warsaw’s warnings about Vladimir Putin went unheeded in Washington and most NATO capitals, and in recent years the Atlantic Alliance has gotten a hard-earned education in Russian ways, which Poles know only too well.

Adding a fourth division to the Polish military isn’t a strategic game-changer by itself, but when coupled with Warsaw’s broader military modernization efforts, it constitutes a serious message to Moscow, above all that any aggressive moves against NATO’s eastern frontier won’t be a walkover. The Polish military stands ready to protect the West and push back a Russian invasion of Europe, just as it did 98 years ago at the gates of Warsaw.

Poland still wants its allies to step up. Above all, Warsaw seeks the permanent basing of a U.S. Army division in their country, even offering to pay all basing costs. Having been betrayed by their allies in 1939 and left to their grim fate, Poles are eager make sure they will not resist aggression solo ever again. Whether or not the Pentagon comes through with deploying more troops on NATO’s eastern frontier, the West can be confident that Poland stands watch, as she has so often in her long history. 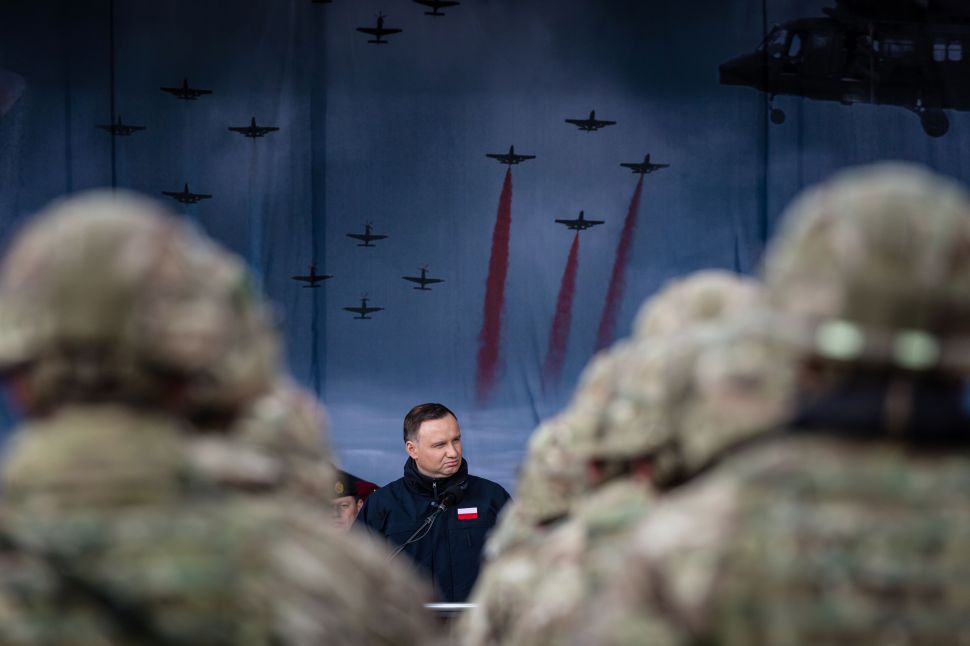