Regime change in the Middle East begins in Times Square.

In the ballroom of the Sheraton Hotel this weekend, hundreds of exiled Iranians attending the Iran Uprising summit cheered at video footage depicting protestors in Tehran chanting “Death to Khamenei,” the Supreme ruler of Iran.

The summit featured keynote speeches from the former foreign ministers of France and Italy, but President Trump’s attorney Rudy Giuliani’s remarks reverberated the loudest. Although the Trump administration has promised not to support regime change in Iran, Giuliani broke with the White House to offer his full-fledged endorsement for removing the Ayatollah.

“I don’t know when we’re going to overthrow them,” Giuliani told the crowd to applause. “It could be in a few days, months, a couple of years. But it’s going to happen.”

Giuliani’s choice of the word “we” was problematic for the White House. At times “we” seemed to refer to the United States and the administration he represented. But at others, it also seemed to imply his own association with a controversial group of Iranian dissidents formerly listed as a terrorist organization by the State Department: The People’s Mujahedeen of Iran, more commonly known as Mujahedeen-e-Khalq, or MEK.

“Very often we’ve had the issue brought up against us that MEK is really not a very powerful organization, that it’s a cult. Are we a cult? I’ve never belonged to a cult,” exclaimed the former New York City mayor to the receptive crowd. “I think it might be fun. They wear strange things and hats and such. But we’re not a cult. We’re a people who are joined by something timeless: the love of freedom, the love of democracy, the love of human life.”

Although the State Department and U.N. Ambassador Nikki Haley have since clarified that Giuliani’s call for Iranian regime change is not the official position of the White House, the president’s attorney frequently touted policies like the U.S. sanctions against Tehran pursued by the administration. He received an undisclosed speaking fee from the organization for his appearance at the summit.

According to a ten-point plan laid out by the movement’s former co-leader Maryam Rajavi on Saturday, the MEK seeks to overthrow Iranian Supreme Leader Ayatollah Ali Khamenei and construct a new “economic and social order based on freedom” that eliminates both sharia law and nuclear weapons.

Controversy has followed the organization since its conception. According to the Council on Foreign Relations, the MEK helped overthrow the Shah, whom the United States bolstered and provided asylum to following his exile in 1979, while participating in terrorist attacks against the Iranian government that killed Americans. Although the organization helped Ayatollah Khomeini rise to power, they fell out of favor with Tehran’s clerical leadership and were forced to seek refuge in Paris, and later Iraq, after the French government expelled them.

Only in 2012, following a deal where MEK agreed to surrender their weapons and cooperate with American military forces during the Iraq invasion, did the State Department delist the group as a terrorist organization. Currently headquartered out of Albania, the group’s political capital and lobbying efforts have greatly expanded over the past decade.

On its controversial history, MEK has denied involvement in violence against the United States, and attributed the deaths of Americans in Iran to “the work of a breakaway Marxist-Leninist faction, known as Peykar.”

When we asked Giuliani how he reconciled MEK’s history of violence against Americans with U.S. strategic interests, he echoed the group’s position that a subset of unaffiliated dissidents were behind the 1970s attacks.

“What you’re referring to happened over thirty years ago,” Giuliani told Observer during a press conference after his speech. “It happened during the overthrow of the Shah. It was a group of people that were not connected to the MEK. This particular organization has been extraordinarily friendly to the United States, embraced by the United States military.”

The president’s attorney went on to call MEK members the United States’ “strongest helpers” who “saved American lives” throughout the Iraq War.

“Probably a third of our supporters are veterans of the Iraq War who feel a debt of gratitude to this particular group of Iranians that gave them intelligence, gave them support, surrendered their arms to them but then continued in a peaceful way to help them,” continued Giuliani. “Whatever the history of 30 or 40 years ago, which is largely incorrect and disproven by scholars, we’re talking about the current group for the last 30 years. Probably our biggest supporters in that region.”

While some scholars, such as Patrick Clawson at the Washington Institute, support the Peykar narrative Guiliani promoted on Saturday, other State Department officials are skeptical. Daniel Benjamin, who was the agency’s counter-terrorism coordinator during the Obama administration, argued to Observer that the MEK is whitewashing their history.

“This has been their standard excuse for a long time. It has not been accepted by State Department experts,” explained Benjamin during a phone interview on Monday morning. “We always felt there was a continuous line of leadership going back through the period when they were carrying out terrorist attacks that shed American and lots of Iranian blood.”

“They didn’t do anything to support American soldiers,” continued the former State Department official. “The only case I know where they provided intelligence was where the MEK provided some intelligence on the Iranian nuclear program. As it happened, we had everything that they supposedly supplied. The result of them supplying it was that it was now out in the public, a lot of it we had through classified means of acquisition.”

On Giuliani’s involvement with the organization, Benjamin was even more wary.

“He was already one of their supporters at the time that the issue of delisting [MEK as a terrorist organization] was hot,” he explained. “I’ve seen no evidence of any great interest in Iran by Giuliani outside of his support for the MEK. Which suggests to me that his interest was primarily driven by the large checks the MEK was giving him for speaking at their events and being a public supporter.”

In the lobby, poster-boards bore images of Iran protests emblazoned with the words “Death to Khamenei.” 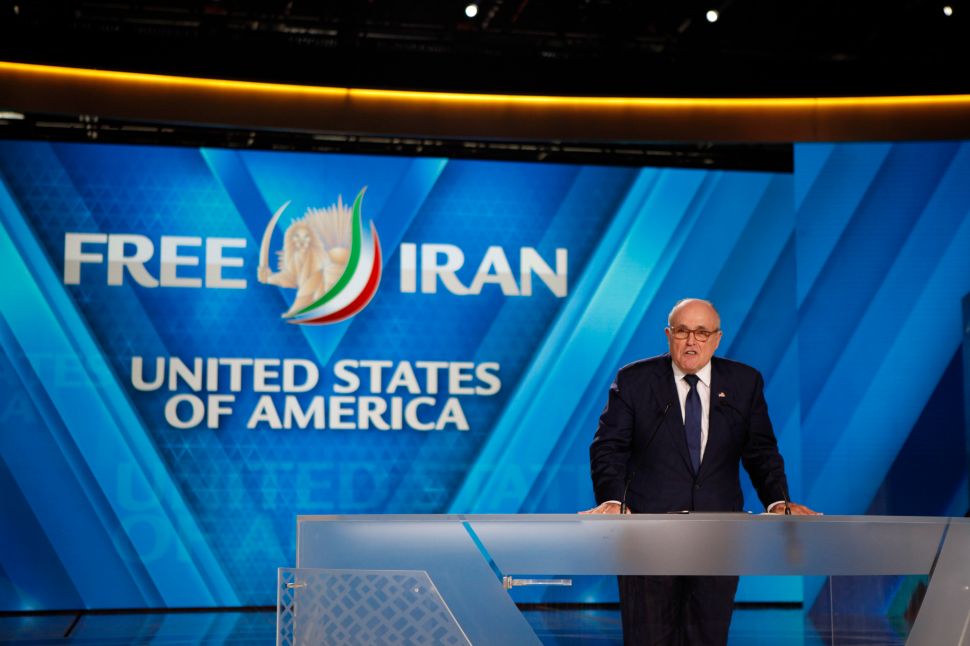